Whiting on its way

The small but sweet fillets of Eastern School Whiting are reaching local markets, thanks to an initiative to invest in automated processing

Commercialisation of the crumbed and battered whiting fillet products has taken almost five years, since LEFCOL first began the search for suitable processing equipment. Eastern School Whiting is less well known than its larger relation, the King George Whiting (Sillaginodes punctatus). It grows to 30 centimetres, but more commonly reaches only 20-25 centimetres in the colder waters off southern Australia.

LEFCOL receives about one-third of the national school whiting catch, which totals 1200 to 1300 tonnes. In the past, much of Australia’s whiting catch was frozen and sold whole to South-East Asia.

However, the co-op has been keen to develop local markets for the whiting and offer an alternative to imported products, which make up about 72 per cent of seafood consumed in Australia (FRDC 2010-222).

LEFCOL’s operations manager Chris Kyle says there was a short period a decade ago when supermarkets in Queensland were interested in a pre-prepared product, and LEFCOL arranged to have the fish processed into butterfly fillets overseas and re-imported. But food trends changed and the whiting fell out of favour due to cheaper alternatives being available. 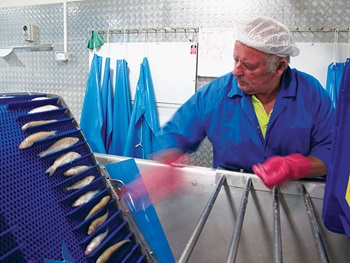 However the potential for a consumer-ready product remained on LEFCOL’s radar, and for the past five years the co-op has been actively investigating new processing and market opportunities.

Eastern School Whiting is one of the more abundant species for the fishers who deliver to LEFCOL’s facilities in southern Victoria, along with Tiger Flathead (Platycephalus richardsoni) and Gummy Shark (Mustelus antarcticus).

They are caught in Commonwealth, NSW, Victorian and Tasmanian fisheries year-round and are a good alternative when the weather is too rough.

Eastern School Whiting fillets may be small, with fillets averaging 15 grams (or 30 grams for a butterfly fillet), but they are sweet and succulent. The size of the fish means hand-filleting is difficult and time-consuming; only 30 per cent of the fish is recovered as fillets.

Given the twin issues of high labour costs in Australia and a shortage of skilled staff, automation has proven the key to reducing the costs enough to make volumes of filleting worthwhile.

Four years ago the search for suitable filleting equipment led LEFCOL to a pelagic fisheries processor at Eden on the NSW South Coast which had been filleting sardines. But after six months of processing the whiting, a fire put the processor out of business.

“The whiting are a similar size to sardines, but they have a different bone structure,” says Chris Kyle. “So the manufacturer was able to copy some of the features of the machines used to process sardines.”

With the filleting machine in place, the next hurdles were to develop an accurate grading system and to provide a consistent feedstock for the filleter. Existing seafood feed-in technology proved prohibitively expensive and it didn’t work effectively with a variation in fish size of almost 70 per cent, from 15-25 centimetres long.

The morphology of the fish was also problematic. When not in rigor mortis, the fish are highly flexible; firm-fleshed in winter, but softer, or with distended bellies during the summer spawning.

After investing more than $150,000 in the filleting equipment, FRDC invested a further $150,000, which allowed LEFCOL to design its own feed-in system. It is manufactured in Gippsland by a local engineering firm and incorporates known technologies into a new sorting system suited to whiting and which could also be adapted to other species. In addition to the financial investment, LEFCOL staff have spent hundreds of hours working to design, develop and optimise the processing system. 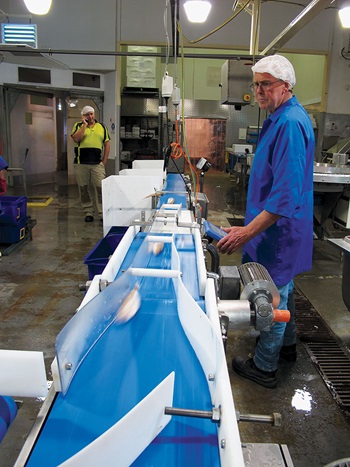 Customisable cleats proved a valuable innovation. These are used to separate fish, keep them on the conveyor belt during cleaning and deliver them single file onto another conveyor belt for weighing, accurate to within one gram. Air jets triggered by the weights then sort the fish into predetermined categories – currently four, but with options for up to six.

Fish less than 65 grams are too small for processing and are usually sold for bait or pet food. Fish of 65-85 grams are set aside for automated filleting. Larger fish are sold fresh and frozen to domestic wholesale markets or are hand-filleted and sold either through LEFCOL’s retail shop or to a wholesale distributor.

Before fish are filleted they are scaled, by tumbling them together in 50 or 100-kilogram batches for two minutes or so; the action of scales rubbing against scales produces effective results.

The automated system – grading and filleting – has been operating for almost 18 months, although it’s only been running efficiently for six months, according to LEFCOL’s general manger Brad Duncan. They can handle up to 200 fish per minute.

Brad Duncan says fishers have been working with the co-op to ensure the catch is a suitable size for processing. “If it is too small to cut it, we can’t get a better price for it at market, so the processing encourages fishers to catch larger fish. They change the cod ends on their nets so that the smaller fish can escape and have a chance to grow. The fishers here have been brilliant, they’ve really embraced it,” he says.

About 45 vessels regularly unload at LEFCOL’s facilities on Bullock Island, the bulk of which are Danish seine trawlers that target flathead, whiting and Gummy Shark. In 2016 LEFCOL received 451 tonnes of Eastern School Whiting, all of which went to domestic markets. 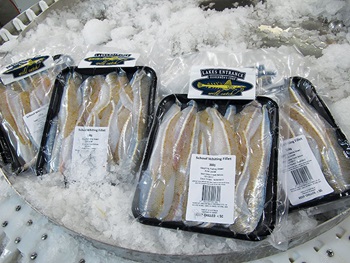 “And as far as we know our fillets are the only 100 per cent Australian caught and processed, battered or crumbed whiting product on the market. We tested several batters and crumbs, working with food distribution company PFD before agreeing on the two options we have now.”

The crumbed product has been developed with Queensland and northern NSW markets in mind, while tempura battered fillets are preferred in southern NSW and Victoria. Both products are sold in one-kilogram bags, and four-kilogram boxes, exclusively through PFD.

Brad Duncan says the partnership with PFD has been crucial in developing the product, from advice on batters and crumbs to access to the food service sector via the company’s extensive distribution network.

He says feedback from PFD is that the whiting fillets are selling well to hotels and clubs, where they are sold as entrees, snacks and a children’s meal option. “We even made the menu at the Melbourne Spring Racing Carnival last year. We’re taking baby steps at the moment and what we process depends on what the fishers catch and how the product is selling. There is definitely an opportunity for us to target import replacements.”

He says LEFCOL is confident the market for the crumbed and battered fillets will continue to grow and production could be quickly scaled up if need be with a second grading and feed-in line. The existing grading system could also be modified for different fish species, such as gurnard, flathead or Yelloweye Mullet, although automated filleting would require a different machine suited to the larger size and different morphology of the species.