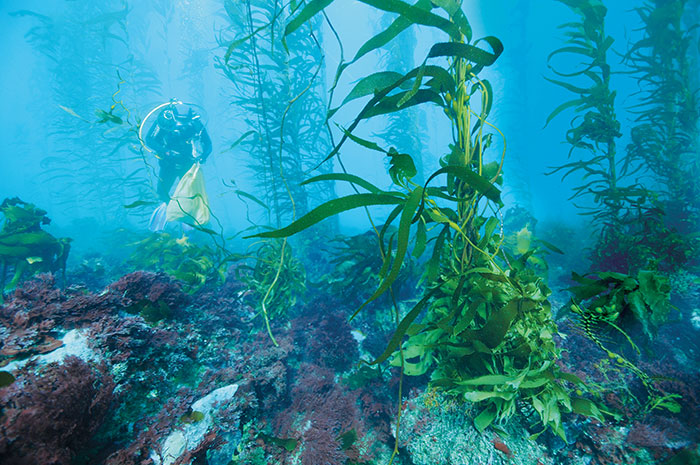 Kelp forests have been disappearing from Tasmania’s shorelines, but globally they are demonstrating resilience and the ability to re-establish themselves.
Photo: Craig Sanderson

In contrast to widespread global declines in corals, seagrasses and oyster beds, kelp forests have proved surprisingly resilient in some regions, according to a new international study.

Researchers at the University of Tasmania (UTAS) have contributed to the study, which provides the first global picture of how kelp forests have changed over the past 50 years in response to stresses caused by human activity.

Based at the UTAS Institute for Marine and Antarctic Studies (IMAS), Craig Johnson, Graham Edgar, Neville Barrett and Scott Ling co-authored the report as part of a team of 37 scientists who analysed trends from 1138 sites across 35 regions of the world.

Craig Johnson says that while kelp has declined in 13 of the regions studied (38 per cent), it remained stable in 12 regions (35 per cent) and increased in 10 regions (27 per cent).

The study suggests that one of the likely reasons that kelp is faring better than some other marine species is its unique capacity to recover quickly from disturbances.

But Craig Johnson says Australian kelp forests are among those in decline. “There are several regions in Australia where there have been significant and widespread losses of kelp – in Western Australia, around Sydney, north of Sydney, and in south-east Australia, including Tasmania. In each region the mechanism of loss is quite different,” he says. These include coastal development, invasive species and climate change.

Researching the rapid collapse of Tasmania’s Giant Kelp beds, Scott Ling suggests it may be difficult for this region to recover, due to the continuing presence of Long-spined Sea Urchin (Centrostephanus rodgersii). Significant long-term warming of the coastal waters of eastern Tasmania has allowed the migration of the northern urchin species into Tasmania’s Giant Kelp beds. The urchins are capable of overgrazing kelp beds in just six months.

Scott Ling says sea urchin overgrazing creates extensive bare rock barrens. “And in the process we lose something like 150 species that are associated with kelp beds, as well as commercially lucrative species such as rocklobster and abalone.

“Once the kelp has been overgrazed, sea urchins switch diet to feed on micro and encrusting algae that grows on the barren reef. This means you virtually have to remove every last sea urchin from a barren for the kelp bed habitat to recover.”

Part of his research has been to examine how predators of sea urchins could mitigate the risk of the urchins overgrazing kelp beds.

In a related project, IMAS researchers have transplanted hundreds of kelp plants into artificial patch reefs, covering more than a hectare, to test the resilience and stability of the kelp Ecklonia radiata, an important species found throughout Australia’s cooler coastal waters.

Believed to be a world-first project, 28 patch reefs were installed at seven metres depth in Mercury Passage between Maria Island and the Tasmanian mainland in early 2015, with the final results of the 20-month project due to be reported later this year.

IMAS PhD researcher Cayne Layton, who worked on the project, says the research is examining how kelp forests change their surrounding environment and how these changes in turn benefit future generations of juvenile kelp. “Our transplanting method may also be used to restore and rejuvenate areas which have already suffered widespread kelp loss due to impacts such as marine heatwaves, increased nutrients or invasive sea urchins,” he says.

This project is supported by IMAS at the University of Tasmania, the Australian Research Council and the Holsworth Wildlife Research Endowment.