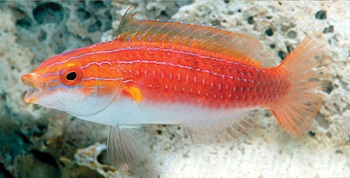 Australian scientists have discovered a colourful new tropical reef fish from the eastern Timor Sea. The Monsoon Fairy Wrasse (Cirrhilabrus hygroxerus) is a small, elongated fish which reaches a size of seven centimetres. It was discovered in the Northern Territory by scientists from the Museum and Art Gallery of the NT and the Western Australian Museum.

The Monsoon Fairy Wrasse, like many reef fish, displays spectacular colours and has a peculiar life cycle. Wrasse species typically start out as females, after which dominant fish transition into males – each phase with a different colour. The females of the Monsoon Fairy Wrasse are a peachy red with blue body stripes, while the male has a black body speckled with iridescent blue and large red pelvic fins.

Unique colour combinations help to distinguish the Monsoon Fairy Wrasse from close relatives isolated in pockets of habitat in the western Timor Sea in Western Australia and Timor-Leste. The naming of the species reflects the tropical monsoon climate in the region where the fish are found, and also recognises industry partner Monsoon Aquatics, which found the fish and worked with scientists to name the species.

Each issue we will try to clarify the meaning and use of some commonly misunderstood words in fisheries science, beginning with the basics.

The word ‘fish’ is a convenient way to refer to a variety of diverse aquatic creatures, some of which are not, strictly speaking, fish. Starfish and jellyfish, for example, are not really fish. While they live in water, they don’t have gills, fins or vertebrae – important characteristics of all ‘real’ fish.

In fact, by some accounts, there’s no such thing as ‘fish’ at all. Evolutionary scientists use a different criteria – the paraphyletic classification system – to group animals based on their common evolutionary ancestry. All ‘birds’, for example, have the same common ancestor.

There are several groups we often refer to as ‘fish’, including sharks and rays, bony fishes and creatures such as lampreys, but each of these have distinctly different ancestry. Tracing evolution backwards to find an ancestor that is common to all of these ‘fish’ groups reveals the same ancestor from which the un-fishlike groups of mammals, birds, reptiles and amphibians have also evolved.

So in the absence of the same common ancestor, the rationale for a discrete group of organisms – called ‘fish’ – disappears.

Set to become a benchmark reference for anyone interested in cooking and eating fish and seafood, this publication provides detailed information on selecting and preparing more than 60 types of fish and seafood, including catching methods, notes on sustainability, flavour profiles and cooking guidelines.

More than 130 recipes showcase the delicious potential of the vast array of seafood available in Australia. Many of the species were chosen because they are under-utilised or unfamiliar to the public, despite their excellent eating characteristics.

The authors include: John Susman, a leading seafood providore who is currently a director of the FRDC; restaurant reviewer and former chef Anthony Huckstep; Stephen Hodges, who is regarded as one of Australia’s best seafood chefs; and Sarah Swan, a chef and recipe developer who worked for Neil Perry’s Rockpool group for 14 years.

A new international initiative has been launched with the aim of identifying illegal, unreported and unregulated (IUU) fishing around the world, which is recognised as a major threat to the sustainability of fisheries.

Global Fishing Watch is a free public initiative, in beta testing, that allows anyone with an internet connection to track vessels fitted with automatic identification systems (AIS) anywhere in the world. Founding partners for the project are Oceana, SkyTruth and Google. The CSIRO and the Australian National Centre for Ocean Resources and Security at the University of Wollongong are among several research partners working with the initiative.

The United Nations estimates that IUU involves up to 26 million tonnes of fish a year globally, representing as much as $23.5 billion in lost revenue, while also undermining management efforts to ensure the sustainability of fish stocks.