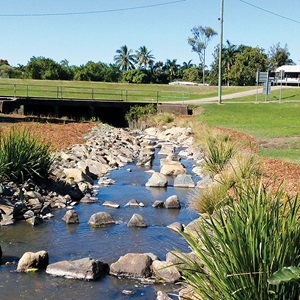 Before (above) and after (below) The removal of a barrier at the Gooseponds in Mackay has included rock ramps to slow water flow and strategically placed boulders and riparian vegetation to improve bank stability.

Many fish, crustaceans and marine mammals are great travellers. From birth to spawning, they can travel thousands of kilometres through oceans and along rivers to a destination that is essential for reproduction, for food in various life phases and for the survival and abundance of their species.

But for many species in Australia (and around the world), these journeys are hampered by human infrastructure: roads, bridges, dams, earthworks causeways, bunds and flood barrages.

This loss of connectivity is having a devastating impact on the total biomass of fish, crustaceans and marine mammals. It inhibits their ability to migrate in order to complete various life stages because their ability to become mature or spawn is dependent on being able to access specific environmental conditions. This in turn means dwindling stocks, as well as the degradation of marine and freshwater habitats.

In Australia, fish and crustaceans that migrate between the sea and freshwater tend to be catadromous – they are born in saltwater, the juvenile fish swim up estuaries to rivers or other freshwater to grow to adult size, and finally migrate back to the estuary or ocean to spawn. These include species important to commercial and recreational fishers, such as Barramundi, Mangrove Jack, Jungle Perch, most species of mullet, as well as many prawns and crabs.

This contrasts with Northern Hemisphere species such as salmon, which migrate upstream as adults to spawn.

“If you have barriers in the way, then those juveniles, who are generally the weakest swimmers of those species, can’t get to those nursery grounds,” says Trent Power, an aquatic ecologist with Catchment Solutions.

Barriers to migration have already been implicated in the decline in Jungle Perch numbers over the past 30 years. These fish used to be found from Cape York to northern NSW, but have now dwindled to small areas in northern Queensland.

Loss of connectivity also makes a population much more vulnerable by splitting it into smaller groups. “The more fragmented a population is, the less diversity and the less resilience it has against change,” Trent Power says.

Loss of connectivity plagues coastlines, estuaries, river and species biodiversity and abundance right around Australia, says natural resource research scientist Colin Creighton, who has led many estuary restoration ecology projects, including the Revitalising Australia’s Estuaries report for the FRDC. He is also currently a director of Greening Australia.

He says the estuaries of the south-eastern Australian coastline have largely disappeared, while the salt marshes of Tasmania are similarly under threat.

The simplest solution is to do away with the barriers. “Engineering-wise it’s pretty easy: let the tide back in, it will kill the freshwater weeds and everything will work fine,” Colin Creighton says.

This approach has already proved spectacularly successful in the wetlands of Mungulla Station in northern Queensland. The traditional owners of the land, the Nywaigi people, removed a bund that had been put in decades ago to turn the wetlands into ponded pastures. Within two years, the wetlands were transformed from a weed-choked, oxygen-starved wasteland into a flourishing ecology; the saltwater tide restoring native vegetation, fish and birdlife. “We see this project as a great model of how we can get these lower floodplains to be more productive for all,” Colin Creighton says.

But if a blockage has to remain in place, such as for irrigation or town water supply, then this is where fishways or fish ladders come in.

“The simplest way of defining a fish ladder or a fishway is that they’re a set of stairs for fish,” says Tim Marsden, head of Australian Fish Passage Services. “Instead of going up one big step over the weir or dam, we create a series of smaller steps that they can negotiate, just as we do when we go up a set of stairs.”

Fish ladders have been used in the Northern Hemisphere for many years to help migrating salmon make their way upstream to spawning grounds. But those fish are adult and have the ability to jump; something that Australian species lack. This means fish ladder designs must be tailored specifically to Australian fish.

There are five main types of fish ladders. Which one is used depends on factors such as the height and width of the barrier, the size of the river, the materials available and the fish species and sizes that use it.

At the smallest and simplest end of the scale are fishways that are effectively a ramp studded with rocks and boulders that create a series of small steps for the fish to work their way up. A design such as this is in use near the Mackay Botanic Gardens off the Pioneer River; a project that was supported by the FRDC and the Biodiversity Fund.

But a fish ladder like that will only work for structures of less than 1.5 metres, such as those on the lower floodplains estuaries. Taller structures require a more sophisticated solution. This might take the form of a cone or a vertical slot fishway. These are essentially stepped fishways, providing a controlled flow of water with obstacles such as concrete cones or small walls that create slow-flow areas for the fish to rest.

For even higher barriers things start to get even more technical with solutions such as fish locks and fish lifts. Fish locks work much the same as boat locks; the fish are attracted into a holding area at the base of the lock, then this periodically closes and the water level inside the lock is increased until it matches the level at the top of the lock and the fish are released above the obstruction. Fish lifts are like elevators in buildings; the fish are enticed into a space, then trapped, raised above the level of the barrier and released. While the engineering might sound relatively simple, designing and building an effective fishway is a complex, multidisciplinary project that needs engineers, fish biologists and hydrologists to make sure that the fishway works for as many species and sizes as possible and under as broad a range of flow conditions as possible.

“We’re passing everything from 20-millimetre gudgeons through to 1.2-metre-long Murray Cod or half-metre-long Barramundi,” Tim Marsden says. “In North Queensland I’m currently trying to pass fish as small as 10 millimetres.”

The fishway must be designed so that the flow rate of water isn’t too strong for these comparatively weaker swimmers. It must take into account the risk of exposure to predators such as herons. And it must be suited to the local climatic conditions, which can range from monsoonal flood pulses to steady winter rain.

Trent Power says new barriers and fishways should be designed to maintain adequate passage over the whole flow cycle, while the aim with retrofitted fishways is to provide this for as much of the flow cycle as possible.

“Up in northern Queensland, we get really high intensity flows at certain times of year over the wet season, but they quickly abate and then you’re left with a really low baseload that might persist for two to three months after that initial big flood pulse,” he says. “That’s generally when the barriers are most restrictive to fish movement and it’s during these flows that you want your fishway to operate at its optimal capacity.”

Fish ladders and fishways will never be as effective as a completely open watercourse, but how effective can they be?

“The smaller the structure is, the more efficient (fishways) tend to be, if they’re built correctly. The wider the river and the higher the structure, the less and less efficient they will become,” Tim Marsden says. “The large numbers of fish that are migrating in these very big rivers, you simply can’t accommodate them through a fishway because the fishway has to be the size of the dam and there’s never enough money to make it that way.”

The big challenge for those working with fishways is the lack of monitoring that happens after a new fishway is installed.

Tim Marsden says this makes it difficult to learn from each fishway to improve future constructions.

“You have to do a very thorough assessment to know how efficient they are and there’s never enough money for monitoring,” he says. 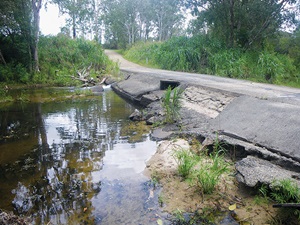 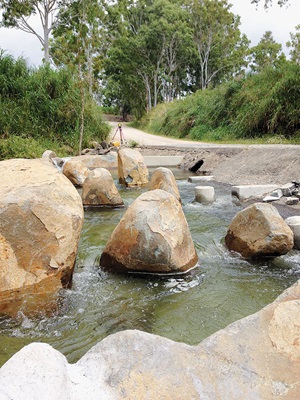 Before (above) and after (below) Building a rock ramp fishway at Blackrock Creek, Mackay, helps to reduce flow velocity and provides resting places for juvenile fishing traveling upstream.

He gives the example of a fishway that was built to enable the migration of Golden and Silver Perch in the Murray-Darling Basin. These fish are usually about 10 centimetres long. Then one day the water flow through the fishway was turned down to a mere trickle and suddenly millions of 20-millimetre gudgeons began travelling through the fishway.

“We didn’t even know these things migrated, but because we created the conditions that were suitable for them to move, we learned that they in fact do undertake migrations in large numbers,” he says.

Similarly, when he began working in northern Queensland, the assumption was that fish only migrated during the peak of the wet season – from December to March – and only big fish migrated.

But a new fishway installed on the Fitzroy River barrage at Rockhampton is allowing 20-millimetre mullets to move upstream in September/October/November.

“They don’t care about the wet season,” Tim Marsden says. “They’ve got completely different migration patterns that people didn’t recognise previously because they didn’t look.
But when we sample fishways, we learn and the next iteration of fishways can benefit with that learning.”

He says that without proper monitoring, it will be difficult to assess the impact of the new fishway on the barrage. “But the fact thousands of baby mullet passed the barrage for the first time in 40 years will be a significant change that people should see over the next few years.”

While the new fishway is an improvement on the previous design, it still has limitations; it only works for certain levels of river height and flow.

To further improve connectivity, Joanne Coulter, a recreational fisher and resident in the Rockhampton area, is advocating construction of channels to connect a series of floodplain wetlands and bypass the barrage altogether.

Her proposed bypass would link a small creek above the barrage with a series of large floodplain lagoons to the south of Rockhampton and thence to tidal creeks below the barrage.
As well as allowing fish to migrate up and down, she argues that a fishway bypass would help the prawn populations in the downstream mangroves, which are negatively affected by the large flushes of fresh water released when the barrage is opened.

Some investigations have already been undertaken into this proposal, which has been criticized as “simplistic”, and alternately hailed as “visionary” by different members of the scientific community.

Discussions in the local community are ongoing, but the debate over the proposal highlights the challenges and complexity of reconnecting flows, and negotiating infrastructure investment against both positive and negative environmental impacts.