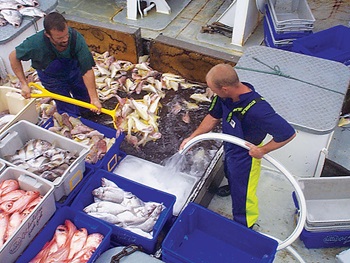 Identifying bycatch species that are worth sorting and keeping for potential new markets is part of the research underway to assist fishers in the Great Australian Bight.
Photo: Fishwell Consulting

Yet over the years, fishers in the sector have identified almost 300 different species in their nets.

Small quantities of non-target species are often retained for sale; however, discards can account for a significant portion of the catch, depending on the time of year and fishing location. It is something the Great Australian Bight Fishing Industry Association is keen to change.

The association has been working with researchers from CSIRO and Ian Knuckey, of Fishwell Consulting, as part of an FRDC-funded project to identify ways to reduce discards and increase the viability of the fishery.

Ten years worth of data from vessel logbooks, onboard observer reports and independent fisheries surveys have been collated to assess the mix and catch volumes of different species, in order to identify those with market potential. “There are two species that make up to 40 per cent of the bycatch: Ocean Jacket (Nelusetta ayraudi) and Latchet (Pterygotrigla polyommata),” Ian Knuckey says. “If we can develop markets for these, we can immediately reduce discards by a substantial volume.”

The project has investigated export sales of these species into Asia and potential new markets and product opportunities. Ian Knuckey says some species that are not well known or commonly eaten by Australian consumers are valued by Asian consumers.

“We need to better understand the market acceptability and obtain realistic prices for non-traditional species,” he says. “We’re working with skippers to send small quantities of selected bycatch species to seafood retailers in Australian and Asian markets.

“This will help test the market and gather vital data including sale price, species, volume, desired fish characteristics and seasonality.”

CSIRO is using additional information on processing, packing and transportation costs to assess the economic viability of retaining these species.

Ian Knuckey says in trying to maximise economic yields in Australian fisheries, people often overlook the potential value of using all of the catch.

However, he says many Asian countries, which also target high-value species and have substantial volumes of bycatch, make greater use of bycatch through a range of processing techniques. These include curing, fermenting, hydrolysis, mincing and dehydrating lower-value seafood to produce protein-rich foods and other products.

In addition to new markets, the GABTS project has also evaluated potential processing techniques that could be adopted for either onboard or land-based processing of bycatch, particularly mincing or liquefying fish protein though hydrolysis.

These processes would allow fishers to value-add to the entire catch and effectively eliminate discards.

Use of an onboard processing plant is being investigated to hydrolyse fish protein, with the liquid potentially sold into fish feed or fertiliser markets. Ian Knuckey says while the targeted catch might sell for $4 to $5 per kilogram, hydrolysed fish protein might be 30 to 40 cents per kilogram.

“We’re also looking at whether the boats can be modified to incorporate a mincer and storage for the product,” he says.

Trawlers in the GABTS have enough storage capacity to process all of their bycatch. Markets and support for new products in the supply chain are more crucial issues to the success of greater resource use.

The project will include an economic analysis and modelling of the supply chain for distribution of bycatch species and alternative fish products, and is expected to be finalised later in 2017.