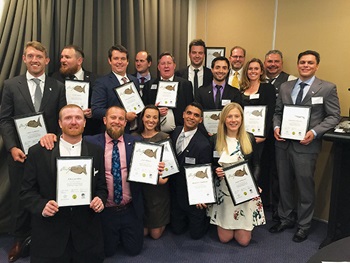 Generating greater recognition of fishing and seafood as a quintessential part of Australian culture – that’s one of the aims of projects undertaken by participants of the 2016 National Seafood Industry Leadership Program (NSILP).

The communications officer for the Western Australian Fishing Industry Council, John Duffy, was one of the 16 participants in last year’s program.

He says he was surprised by the strength of the shared desire to more strongly connect the seafood sector as an intrinsic part of Australia’s national identity, heritage and economy.

While there are already so many ways that Australian society identifies with seafood, he says the group recognised it was important the next generation of industry leaders continued efforts to maintain and enhance these connections.

The NSILP runs across eight months and John Duffy says it gave him huge exposure, within a short time frame, to a broad cross-section of the industry. “I learned a great deal, both professionally and personally, from all involved – participants, facilitators and presenters,” he says.

Another participant, Paul Jordan, a second-generation commercial fisher from King Island, also says the program was valuable in broadening his perspective of the sector. “Having grown up in a fishing family I really hadn’t thought much further afield than issues that face us as commercial fishers,” he says.

“But the more I listened to everyone’s thoughts and ideas, the more I started to realise that fishers, seafood wholesalers, retailers, marine scientists, aquaculturists and even recreational fishers – this one surprised me the most – want the same thing and face similar issues.”

The 2016 NSILP concluded in November with an intensive week of meetings with politicians including Deputy Prime Minister Barnaby Joyce, Senator Anne Ruston, other members of Parliament and their senior advisers.

The meetings were followed by a formal graduation ceremony and dinner, with participants providing an overview of the projects they worked on in teams during the year.

Jill Briggs, NSILP program manager from Rural Training Initiatives, says continuing investment in developing leadership capability in the fishing and seafood sector was the best way to improve the resilience of Australian industries. The program provides skills sessions and practical activities that enhance participants’ knowledge and confidence to lead their industry into the future.

Celebrating Women in the Seafood Industry 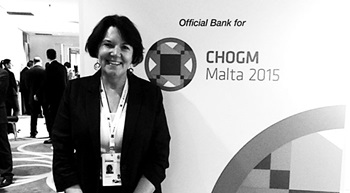 How did you get involved with the seafood industry?

I was working in tourist resorts in the Whitsunday Islands when some of the Northern Prawn Fishery trawl boats came through on their way to the Gulf of Carpentaria for the start of the 1980 fishing season. One of the skippers asked me if I wanted to go to the Gulf and offered me a job as a cook/deckhand. It seemed like a fun and adventurous thing to do, so I said yes and the next day we were heading north!

What led you to choosing this as a career?

I didn’t really choose this career – it chose me! I totally fell in love with the Northern Prawn Fishery and the industry in general when I went fishing in the Gulf in 1980.

Do you have any particular goals?

<p">My personal goal is to have the Northern Prawn Fishery operating as Australia’s first successful, fully delegated, third-party-audited, co-managed fishery, whereby government delegates the majority of NPF fishery management functions to our industry body, in the next three to five years.</p">

What are you most passionate about in relation to your industry?

I’m equally passionate about ensuring that we harvest our fisheries in an environmentally responsible manner and that our fisheries generate profits. Fishing is hard work. It takes a lot of commitment and financial investment, and fishers are often away from home for long periods of time. I strongly believe that our fisher folk deserve good economic returns for their efforts, providing their fishing practices are sustainable.

What are the opportunities for women in our industry?

Opportunities for women are limitless these days. When I first started the few women involved were mainly in seafood processing. Now we are involved in every aspect of the industry, from deckhands and skippers and aquaculture production, to scientists and fishery managers. Many women own and operate seafood businesses – from boats to retail outlets. There are a lot of women like myself in leadership roles. And we have our first female federal fisheries minister! It’s been great to see the growing involvement of women in the seafood industry over the years – I’m really proud to be part of that journey. 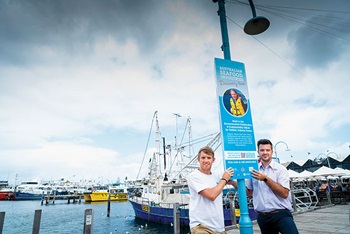 Promotional posters wrapped around lampposts in Fremantle provided Matt Watson (left) and Asher Flynn and other members of their NSILP team with the idea to create a street art seafood trail, which premiered at the Australian Wooden Boat Festival. Held in Hobart from 10–13 February, 2017, the festival provided exposure to thousands of people with an interest in boats, boating and all things marine.

Matt Watson says the project displays information promoting the diversity of the seafood industry on lamppost wraps, which created a community trail winding throughout the festival site at Salamanca Bay. Those who undertook the tour – mostly families – won prizes by following the trail and answering questions using information on the posters.

He says the Wooden Boat Festival was essentially the pilot for an industry promotional strategy he hopes will be adopted at other relevant events, including a variety of seafood festivals held across Australia during the year. He says the same poster designs could be used, or local event organisers might choose to develop their own bespoke posters within the industry tour framework.