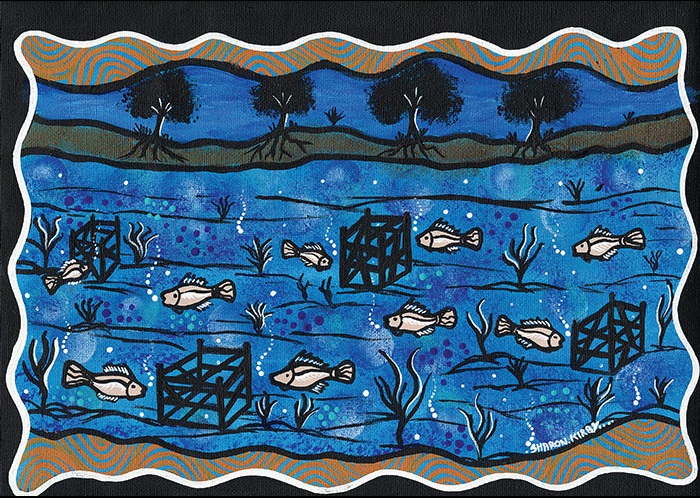 For more than two years, members of the Barkindji Maraura Elders Environment Team (BMEET) have been working with the Murray-Darling Freshwater Research Centre (MDFRC) and La Trobe University to restore fish habitat in the lower Darling River near Wentworth, on the NSW-Victoria border.

They have been building and installing ‘fish hotels’, re-creating river snags to improve biodiversity in the waterway. Large stretches of the river were cleared of snags in the mid-to-late 1800s to provide passage for paddle-steamers and many areas have remained relatively barren of both fallen woody debris and fish ever since.

“We want to encourage more fish into stretches of the river where there are currently very few,” says MDFRC ecologist Paul Brown.

Many Australian fish species are found in association with ‘snags’ – large woody debris in rivers. Generally, snags provide a velocity refuge in flowing water that allows fish to save energy. They provide shade and physical protection, or hiding places, for both predators and prey.

Invertebrates such as shrimp eat the slimy matrix of algae, bacteria, diatoms and fungi that grows on the woody surface of snags. Herbivores such as Bony Herring graze on filamentous algae that grow on the wood, while small fish species such as gudgeons and rainbowfish prey upon small shrimp and other invertebrates. Ambush predators such as Murray Cod and Golden Perch can also often be found lurking around snags.

“Essentially, snags are the supermarkets of the river system,” says Paul Brown. “You can get all your provisions there and if you hang around long enough you’ll see everyone in town.”

The project has been funded over two years by the NSW Recreational Fishing Trust, in conjunction with the MDFRC, and has focused on a “low-tech” solution that could be easily implemented.

BMEET manager Dameion Kennedy says it has provided employment for members of the local Barkindji community and has also been an important opportunity for trainee rangers to connect with their country.

The Barkindji people are based on the floodplains of the Murray and Darling rivers, which meet at Wentworth, but Dameion Kennedy says it is often difficult to gain access to the river and adjacent floodplains as the land is privately owned.

However, in the case of the BMEET project, local landholders Ormond and Kelso McLeod were happy to cooperate with the rangers, who installed the fish hotels along a five-kilometre stretch of their property, where it fronts the Darling River. Dameion Kennedy says this also provided an opportunity to identify middens, scar trees and other signs of Indigenous life along the riverbanks and to share the associated cultural traditions with the younger members of their team.

The fish hotels were pre-assembled at BMEET’s Dareton workshop, using Mallee timber donated by another local landholder. Two different structure designs are being trialled, both less than two metres high.

However, it may not be long before the signage also alerts boaters to the most likely fishing spots.

Sampling in 2015 found the constructed snags had attracted a similar mix of species as those found around naturally occurring snags, although larger fish were still absent. Further sampling will be undertaken later in 2017.