Carp clean-up campaign on the cards

As the FRDC investigates whether or not it is feasible to release a carp-killing virus, one fisher contemplates a future without his nemesis

Catch a Carp Day in the Mallee
Photo: David Sickerdick

While the rivers of the Murray Darling Basin heave with carp fingerlings after the highest level of recruitment in years, long-time carp fisher Steve Hounsell is considering a future river system without them.

Over the next two years, the FRDC will investigate whether and how to develop a plan for release of a naturally occurring, species-specific virus that could kill more than 70 per cent of the invasive carp in the river system.

As one of Australia’s foremost carp fishers, Steve Hounsell has mixed feelings about the plan. On one hand, he sees the virus as a chance to address the ecological damage done by a fish he considers a plague. On the other, it could remove the foundation of his business.

In May 2016, the Australian Government announced $15 million in funding to develop the National Carp Control Plan for the potential release of the carp virus (also known as CyHV-3).

The plan, to be finalised at the end of 2018, is about figuring out how, when and where the virus would be released and managed. The government will then decide whether, as a nation, we should invest in executing the plan, once the environmental, social and economic benefits and costs of doing so have been carefully evaluated.

The plan will consider how to release the virus in the most effective way, how to monitor its impact on aquatic ecosystems, and how to avoid or minimise any adverse public health and environmental impacts. The question of  what legislation is required in Queensland, NSW, the ACT, Victoria, South Australia and the Commonwealth is also an important consideration. Should the virus be released, follow-up activities will also have to be managed. This will be accompanied by a community consultation and engagement process.

Steve Hounsell has been fishing in Victorian and NSW inland waterways for almost 40 years, initially targeting native fish before these commercial fisheries were closed. For the past 15 years he has focused on carp, and is responsible for more than half of the NSW carp catch, most of which is provided to fertiliser manufacturer Charlie Carp, based in Deniliquin. Commercial fishers like him are likely to have an important role in the clean-up and are also involved in the consultation process.

He’s cautious, but keen to see what the carp virus can do. “I’ve watched the commercial inland fishery decline for 38 years because of carp. I hate carp with a passion,” he says. “Environmentally, I like the idea. I think if it works as well as hoped it will be a good thing.”

Far left Carp make up more than 80 per cent of fish biomass in the Murray-Darling Basin.
Photo: Tom Chesson

Carp now make up more than 80 per cent of fish biomass in many of Australia’s inland waterways, and up to 93 per cent in some places.

Initial estimates – admittedly rough – suggest there may be upwards of 500,000 tonnes of carp in the Murray Darling Basin. If the virus kills more than 70 per cent of this biomass, that’s about 350,000 tonnes of fish. In comparison, Australia’s total annual wild catch harvest is only about 150,000 tonnes. “That’s a shitload of fish,” sums up Steve Hounsell. And it’s why planning for the staged release of the virus is critical. As part of the planning process biomass estimates will be refined, to understand more accurately the extent of the clean-up required, should the virus be released. A key priority of the plan is also to ensure that no public health or environmental issues arise from the release of the virus, so these risks will also be considered.

Options to handle the large volume of carp will be explored this year by the FRDC in a sub-project as part of the plan’s development.

“We’re in the process of setting up a project looking at how post-release follow-up activities could be safely and effectively undertaken,” says FRDC project manager Toby Piddocke, who is overseeing this aspect of the plan. “A part of that is talking to the people who are already harvesting carp to discuss appropriate methods, their strengths and limitations.” One much-discussed option for disposing of the dead or dying fish is to use them for fertiliser, but there are challenges to that.

“Once they die, bloating will bring them to the surface, and they’ll be easy to scoop up,” says Steve Hounsell. “But they’re starting to decompose then, and they’re no value for fish emulsion fertiliser at that stage. That needs food grade fish.”

Managing the dead carp will be significantly easier with a regionally staged rollout of the virus. However, controlling the virus spread won’t be simple. Dispersal of the virus will be affected by water flow, and animals such as birds may further facilitate the spread of the virus. Steve Hounsell says he expects that the “human vector” could be the most unpredictable in spreading the disease. 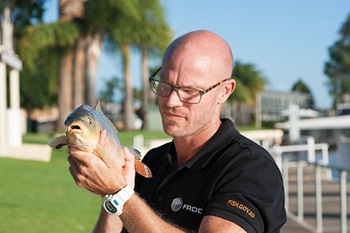 Despite wanting to see the virus release happen, he has conflicting emotions about what it will mean for him.

“We’re in limbo at the moment,” he says. “I’ve been building the business up by 20 to 25 per cent per annum for the last five years, since the Millennium Drought, but now I’ve put the brakes on. There’s no point investing until we know what’s going to happen.”

Immediately after the release of the virus it is expected that carp numbers will drop dramatically. In the longer term, however, some level of resistance could be expected in those fish that survive. It is uncertain whether carp numbers would remain too low to support the continuation of business by Steven Hounsell and others, or whether they would rebound.

“The concern I have is a build-up of resistance or immunity to the virus, and the reproductive capacity of carp,” says Steve Hounsell. “I’ve seen lakes that within three years of being dry have a carp biomass density of 600 to 700 kilograms per hectare. Their reproductive capacity is incredible.”

FRDC’s National Carp Control Plan coordinator Matt Barwick says the potential for populations that don’t succumb to the virus will be taken into account.

“Eradication is extremely improbable. That’s why we need to have other tools in our arsenal to continue to suppress the carp numbers,” he says. These include more virulent strains of the virus, and strategies to skew the sex ratio of remaining carp populations, so that they effectively breed themselves out of existence. Also critical will be expanding efforts to recover native species and improving habitat so that native species can effectively compete with carp.

Traditional measures including commercial fishing, trapping, carp-buster events and controlling access to carp breeding grounds will continue to be important components of an integrated strategy to control the fish. So too will measures to recover native fish species to help prevent carp numbers rebuilding.

Using this integrated approach, the long-term goal of the National Carp Control Plan is a 95 per cent reduction in carp numbers by 2045.