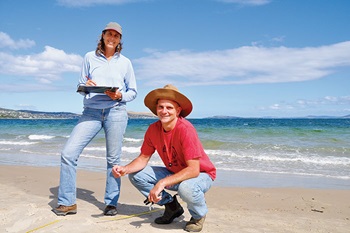 A project that has helped uncover the scale of marine debris around Australia and its journey to the sea has won the Eureka Research and Innovation Prize for Environmental Research.

CSIRO’s Marine Debris Team won the award for its work combining field data and laboratory analyses with oceanographic and ecological modelling to understand patterns of marine debris distribution as well as its impact on wildlife.

Project leader Denise Hardesty, a CSIRO research scientist, says it is the first time an environmental issue has been tackled so rigorously, with a systems-based approach and with such a high level of engagement from all levels of society.

The work initially began as a way to identify coastal debris ‘hotspots’. And it found them. These hotspots were concentrated near urban centres, suggesting local sources. It also found that three-quarters of rubbish along the coast was plastic and mostly from Australian sources.

The team also tracked how debris made its way to the sea and found that human behaviour (littering) was by far the most important factor in determining the amount of rubbish at a site. Transport by water was second, with a smaller effect from wind transport. Using this information, a model was developed to predict debris loads at unsurveyed sites.

Denise Hardesty says that while the information in itself is important, it is also valuable in helping to cost-effectively target areas for waste reduction.

For example, addressing sites with high littering rates should be a priority, while mapping work has shown where allocating and installing debris traps would be most effective.

“Instead of finding this information overwhelming, we can use the knowledge to make mindful decisions, and to inform government and policy makers.

“I think the public has an appetite for the topic. Most Australians live near the coast and have an attachment to the beaches, the water, the oceans and their shores.”

She says litter affects wildlife directly through entanglement and ingestion and indirectly through chemical effects. Marine debris is also an issue of ongoing concern for fishers, who have initiated clean-up campaigns in many areas.

Denise Hardesty’s interest in marine debris began in the 1990s while a researcher on Midway Atoll in the North Pacific Ocean, where she was confronted by the impact of plastic waste on seabirds.

Today she is based in Tasmania at CSIRO Oceans and Atmosphere where she oversees many marine debris projects with partners that include the Federal Department of the Environment and Energy, The Australia Packaging Covenant and Ocean Conservancy.

The University of Tasmania’s Redmap Australia was also a 2016 Eureka finalist – in science communication. Redmap Australia is a citizen science-based range extension database and mapping project. It aims to engage the public in producing knowledge on how the distribution of marine species may be affected by climate change.

Mapping fisheries gear loss is another area the CSIRO Marine Debris Team is working on. With PhD student Kelsey Richardson, CSIRO and the University of Tasmania will: