Australia is leading an international research collaboration to understand how shared Patagonian Toothfish populations in the Southern and Indian Oceans are connected, and to support the sustainable management of fishery resources

For every tonne of the highly prized Patagonian Toothfish (Dissostichus eleginoides) harvested from Australian waters this winter, at least two fish were tagged and returned to the Southern Ocean as part of an accelerated monitoring program for the fishery.

With a total catch of about 3400 tonnes in 2016, that’s 6800 fish released in pursuit of better information to improve fishery management. In 2015, the tally was 8800 fish tagged and released.

The past two years represent a doubling of the previous tagging rate. The tagging has been done in conjunction with a new research project funded by the FRDC which aims, in part, to determine more conclusively the nature of the relationship between the Australian Heard Island and McDonald Islands (HIMI) Patagonian Toothfish fishery and adjacent French Kerguelen Islands fishery.

Are they a single population, requiring joint management, or are they independent populations, with some shared genetics? The answer is a crucial one for the Australian and French governments managing their respective fishing territories and catch quotas. 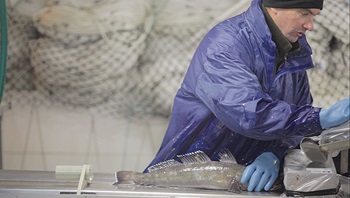 Patagonian Toothfish are known to spend most of their lives within a 40-kilometre home range. However, genetic testing has revealed that toothfish populations in the two territories are closely related. The recapture of Australian-tagged fish in French waters, and more recently French-tagged fish in Australian waters has shown that fish can and do migrate up to 2500 kilometres.

The Commission for the Conservation of Antarctic Marine Living Resources (CCAMLR), whose oversight includes both Australian and French territories, wants to ensure the potential implications of this migration on resource assessment and management are well understood and taken into account by fisheries managers.

The Marine Stewardship Council, which has independently assessed both Australian and French Patagonian Toothfish fisheries as sustainable, has also made its certification subject to joint strategies to address this issue.

Marine scientist Dirk Welsford at the Department of the Environment and Energy’s Australian Antarctic Division (AAD) is leading the search for answers through the FRDC’s four-year project. The outcome is expected to be a resource assessment model that includes improved understanding of both Australian and French Patagonian Toothfish populations and accounts for migration between the two fishing zones. This migration is currently thought to represent a few per cent of the population.

The project began in 2014 and has access to almost 30 years of commercial and research data from both fisheries, which are based around the Kerguelen Plateau, where the Southern and South Indian Oceans meet.

Dirk Welsford says there have been sensitivities around fishing data, given the illegal fishing that plagued the region during the 1990s and 2000s. “The data sharing has been a major act of goodwill between the two countries, and it is starting to provide a much better picture of fish habitat and dynamics.”

Only two companies hold concessions to fish Patagonian Toothfish in Australian waters: Australian Longline and Austral Fisheries. Both have been involved in the tagging and research for nearly 20 years to better understand the fishery.

Over this time the fishery has transitioned from trawl to longline fishing operations, a change that has revealed new information about its catch.

Fish caught in trawls, tagged and returned to the water do not travel far and trawls tend to go over the same ground repeatedly. There are a limited number of fishing locations and it also tends to target smaller fish.

Dirk Welsford says data from trawls is valuable, but not entirely representative of the whole fish population. “As the fishers have begun targeting larger fish with longlines they have covered a more diverse area. So the tags are more widely dispersed and provide more information about the movement of fish and stock structure.”

Data from the HIMI fishery shows that larger fish generally live in deeper water, and females grow to 1.8 metres, while males of more than one metre are less common.

Other information from longline fishing has included evidence of spawning activity in Australian waters. Prior to 2009 spawning was known only to occur in French territory. A 2010 FRDC project identified spawning grounds in the Southern Ocean, with males and females congregating between May and August, in waters between 1500 and 1700 metres deep.
Dirk Welsford says the discovery of more widely distributed spawning grounds is good news for the Patagonian Toothfish population across the whole region, reducing the risk should recruitment fail in any particular part of the fishery.

The modelling the AAD uses for stock assessments has incorporated longline tagging data for the past two years, and this has led to some fundamental changes in the way the algorithms behind the model have calculated the resource. For fishers, this has meant some variability in the total allowable catch (TAC) as the model ‘readjusts’ to account for tagging data. The HIMI TAC increased from 2730 tonnes in 2013 to 4410 tonnes in 2015, and then decreased to 3405 tonnes in 2016.

Martin Exel, general manager of environment and policy at Austral Fisheries, says despite the quota fluctuations, the company is confident the tagging is helping to get a better understanding of the movement of fish stocks and the age classes of stocks.

He says this year, however, it has been a challenge to catch even the reduced quota, and a range of factors is being investigated for the sudden drop in catch rates. Chief among these is an increase in Southern Ocean temperatures by 2ºC in May and June 2016 – a delayed effect of the 2015 El Nino weather pattern.

Changes in fish condition, size or maturity, the prevalence of sea lice (which eat baits) and other fishery-induced changes are also being investigated, in conjunction with comparisons of trawl data from previous years. While no single definitive cause has yet been identified, Martin Exel says there is mounting evidence it is the result of environmental factors, rather than overfishing.

As the HIMI fishery transitions from trawl to an exclusively longline fishery, the longline tagging data is being added to ongoing trawl data in stock assessments.

“The AAD randomly select locations around the Australian side of the Kerguelen Plateau for us to survey,” says Martin Exel. “This year, over 20 days, we did 167 trawl survey shots. The focus is on three to four-year-old fish, and it helps to assess the health of recruits to the fishery, as well as stocks of other species such as icefish,” he says.

Combined trawl and longline tagging is expected to continue until 2020. The Australian Fisheries Management Authority, which manages the fishery, says trawls will not be phased out until stakeholders are confident data from longline tagging provides enough information for resource assessment.

Dirk Welsford and his team are now working to expand the model used for Australian stock assessment to include the French fishery interactions. “As part of this project we are also trying to account for biases in earlier, more limited data,” Dirk Welsford says.

A workshop with fisheries managers from Australia and France is planned for mid 2017 to report on the final modelling and implications for management. 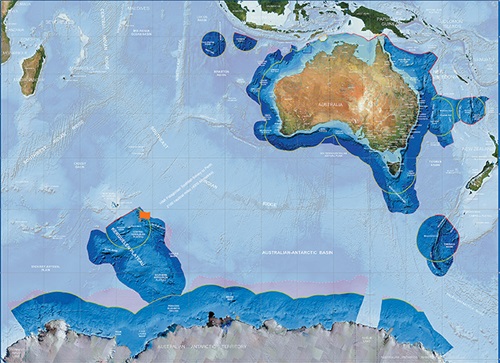 Red line/s: Exclusive economic zone and continental shelf treaty boundary with an opposite or adjacent state