Seaweed on shortlist in co-culture trial

Interest is mounting in the economic and environmental potential of seaweed co-cultivation with other aquaculture operations, from finfish to oysters 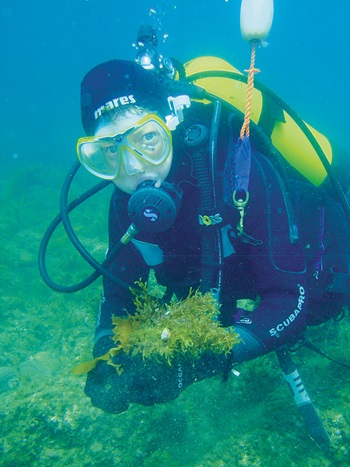 Native seaweeds could be the next big thing in Australian aquaculture, as businesses look to diversify their income streams and improve water quality at the same time.

Researchers at the South Australian Research and Development Institute (SARDI) have been investigating integrated multitrophic aquaculture. This describes the co-culture of organisms where one species benefits from and therefore removes the wastes from another species, and both species have an economic value.

The project had its genesis when a team of researchers from SARDI and CSIRO began working to improve their understanding of nutrient cycling in the water around Southern Bluefin Tuna and Yellowtail Kingfish farms off the South Australian coastline. The project investigated the hypothesis that farmed seaweed would absorb nutrients generated in the farm, producing a usable product and decreasing the industry’s environmental footprint.

Countries including Norway, Canada, Chile and China are investigating the use of seaweeds to offset nutrient inputs from fish aquaculture. Seaweed farming is also big business in Japan, China and parts of South-East Asia, but many of those regions are struggling to meet consumer demand for a higher-quality product not tainted by pollutants.

Seaweed derivatives are routinely used in a host of other products including other foodstuffs and industrial products. They are also attracting attention from the nutraceutical industries as a food ingredient with specific health-promoting functions.

SARDI’s Jason Tanner says co-culturing seaweed with finfish farming offers a “natural fix” that could potentially provide an additional income stream. “There’s a whole host of different strands coming together to show that it’s a good time to start thinking about seaweed production here in Australia,” he says.

With funding from the FRDC and SARDI, Jason Tanner and Kathryn Wiltshire began looking into the potential of native rather than introduced seaweed species. They were on the hunt for what might thrive in a more nutrient-rich environment and also have economic potential.

The researchers began with a search of seaweed species that grow along the South Australian coastline. “We screened them to come up with a shortlist of species that we thought might be fast growing, might be able to survive in that habitat, and might be able to produce something of value,” Jason Tanner says.

Kathryn Wiltshire then studied the shortlisted species, looking at how well they coped with being handled and whether they could be grown in the laboratory under simulated fish farm conditions. She also conducted a small-scale pilot field trial in Adelaide in partnership with Cleanseas Tuna.

From this, they identified four species of seaweed that grow naturally in Australian waters with potential for co-cultivation with finfish farms. These included two red species, Solieria robusta and Gelidium australe, and two brown species, Ecklonia radiata and Cystophora subfarcinata.

The red Solieria robusta has a history of human consumption and also grows outside of Australian waters. The other three have potential in more indirect industrial or pharmaceutical applications, Kathryn Wiltshire says.

Shellfish producer Cameron of Tasmania has brought a researcher on board to look at the viability of multitrophic aquaculture for its oyster farm. General manager Ben Cameron says seaweed co-culture could offer significant benefits, both economic and environmental, to oyster farmers.

“Firstly, we were after species diversification, so we can shed some of the risk of being a monoculture,” Ben Cameron says. “Oysters also rely on pristine, beautiful water quality, so we were looking at what could we do that can enhance water quality.” They will initially focus on species that make up the kelp forests off the Tasmanian coast.

Ben Cameron sees potential in co-cultured seaweeds becoming a premium product within the Australian market. “Increasing the size and breadth of that total seafood basket is where you can attract very high-value dollars and build further upon that Brand Tasmania, Brand Australia, for fresh, high-quality seafood.”