In praise of stealth 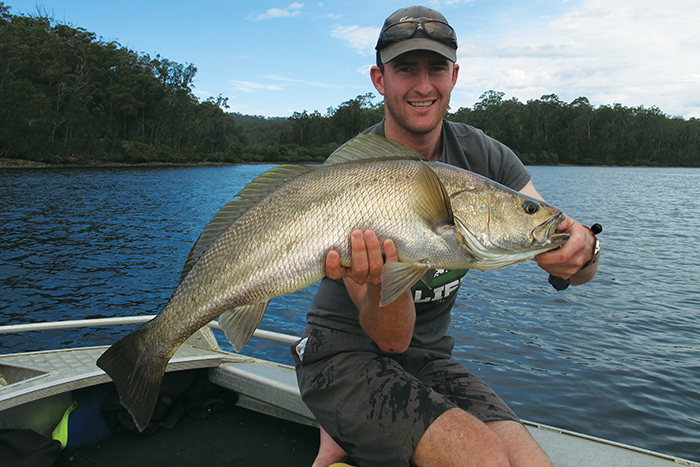 A new study has uncovered the reason why Mulloway can be so fickle and hard to catch. The culprit is human-induced noise, particularly in the form of boat engines.

The reason was revealed as part of a broader project that tracked changes in the activity of Mulloway (Argyrosomus japonicus), Dusky Flathead (Platycephalus fuscus), Sand Whiting (Sillago ciliata), Yellowfin Bream (Acanthopagrus australis), Luderick (Girella tricuspidata) and various stingray species in response to environmental conditions in estuaries across New South Wales. The research was funded by the NSW Recreational Fishing Saltwater Trust and the Australian Research Council. Marine biologist Nicholas Payne jumped at the chance to take part in the study. He developed a fascination for fishing – for Mulloway in particular – during his childhood. Weekend trips with his father were spent tracking down giant Mulloway along remote beaches in South Australia.

“Mulloway are considered one of the most sought-after recreational species in Australia,” he says. “They have an enigmatic status and I put that down to the superb fight they put on when hooked, and the difficulty catching them.”

While at the University of New South Wales (UNSW), and in collaboration with the NSW Department of Primary Industries, Nicholas Payne helped to tag dozens of Mulloway. Project leader Matthew Taylor says the tags used in the three-year project are helping researchers to understand the feeding and breeding habitats of estuarine predators.

“During the project we spoke to local fishers and many believed that to catch Mulloway you need stealth tactics – electric rather than combustion engines and any other ways of reducing noise levels,” Nicholas Payne says. “At first I was a bit sceptical of this idea, but I was intrigued by the possibility that Mulloway are so sensitive to noise.”

This idea was shown to have substance when the fish activity data was examined and revealed Mulloway activity to be lower on weekends – when boating activity is increased. “The Mulloway didn’t completely shut down on weekends, but it was a noticeable difference,” Nicholas Payne says.

Obtaining the activity data involved the use of ‘acoustic accelerometer’ tags deployed into the Clyde River at Batemans Bay. The tags, about the size of an AA battery, measure acceleration as the fish swim.

The tags were implanted – carefully angled – into the belly of an anaesthetised Mulloway in a water bath using medical-grade surgery techniques in a procedure that took up to 15 minutes from capture to release. Underwater receivers deployed throughout the targeted estuaries were then used to detect acoustic ‘pings’ that transmit information about the average activity exhibited by the fish every five minutes.

“This technology provided remarkable insight into the habits of fish and what drives their behaviour, making it possible to understand behaviours in the wild,” Matt Taylor says. “We have only just scratched the surface, and I expect there will be a great deal more interesting findings from a range of species into the future.”

The boat noise hypothesis was further supported by existing data on Mulloway stomach contents sampled throughout the Georges River, NSW. “Mulloway caught on weekends had around 60 per cent less food in their stomachs than Mulloway caught during the week – that amounts to a huge difference,” Nicholas Payne says. “Not only do Mulloway eat less on weekends, but species that take more effort to catch are particularly absent from their diet.”

Taken together, the data pointed to a drop in predation on weekends, coinciding with increased noise from boating activity.

Studies increasingly indicate that sources of underwater noise affect animals – from birds to marine mammals. Aquatic ecosystems are particularly vulnerable because noise travels further in water than in air, creating an impact over larger areas.