From Maine to Meningie, time spent in South Australia’s Coorong provides an international perspective on community fisheries for Tucker Sheehan 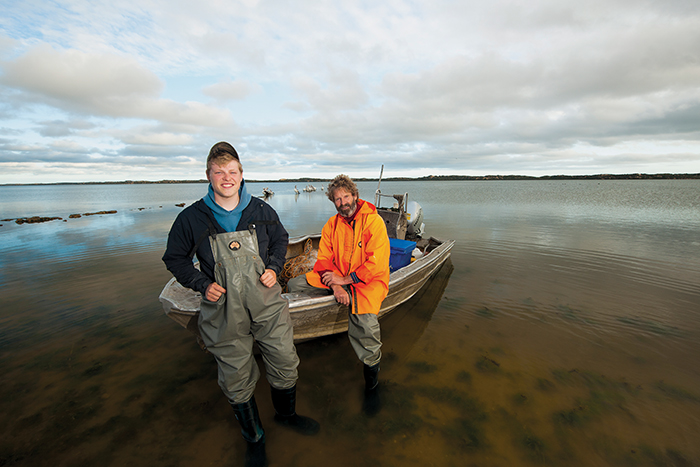 Tucker Sheehan (left) and Glen Hill represent fisheries from opposite sides of the globe, but have found much in common as part of small, community-based fisheries.
Photos: Brad Collis

Pembroke, a small fishing community in the far north-east corner of Maine, is famed among seafood lovers up and down the US east coast for its clams and lobster.

Named after a boat-building village in Wales, it has been a seafaring and fishing community since its settlement in the 1770s.

At first glance, with its North Atlantic environs, it would seem a far cry from Meningie, South Australia, where the turbid waters of the Murray River empty into estuarine lakes flowing ultimately to the fabled Coorong lagoon, a sand dune away from the Great Australian Bight.

Young Pembroke native and environmental science student Tucker Sheehan recently spent two months working with Coorong fisher Glen Hill during his summer break to experience a very different type of fishery to the clam business in which he was raised.

The actual practices used in the two fisheries could not be more different. Clamming involves back-breaking hours digging into mudflats with a short-handled rake. The mullet fishing he did with Glen Hill actually involved a boat, albeit an impressively dented aluminium ‘tinnie’.

But for Tucker Sheehan there were also important similarities: “They are both community-based fisheries and hand operated,” he says. The role of both fisheries in their local economies, and the resource sustainability, is restricted by the built-in limits of manual labour.

“The catch is restricted to how much people can actually catch in the time available. For clammers this is low tide, and for most that also means just daytime low tides.

“It’s the same on the Coorong. Each licensed fisher can only have a few nets in the water and it takes time to pull them back into the boat and each time you might get one box of fish – if the seals don’t beat you to it.

“Over the weeks as we moved to different areas of the lagoon the catch was very consistent, indicating an evenly distributed, healthy population,” he says.

Given its importance to the local community and economy, Tucker Sheehan was surprised at the antagonism from some quarters towards the fishery, but says he also soon learned there was little interest in debate: “People seem to have set positions, but what you hear or see written and what I found to be the reality are quite different.

“It was obvious, from what I saw and from the daily data, that the fish population is healthy.

“But if you try and show the critics the catch figures, they don’t want to know.”

Given the Lakes and Coorong Fishery’s international acclaim as a Marine Stewardship Council (MSC)-certified fishery, which it obtained with help from the international environmental group World Wildlife Fund, the opposition from other environmental lobby groups surprised Tucker Sheehan: “It was something I hadn’t expected and it has given me something to think about when I return to university.

“I’m studying environmental science and sustainability and I’m interested in how people perceive this or respond to this. So it was instructive to experience firsthand how the fishers operate and what they have to do to keep their MSC credential, and then against this a prevailing view that commercial fishing at any level is bad.

“The reality is actually about management. Good management means people can be fishing and making money, contributing to the community, and not harming the environment.” 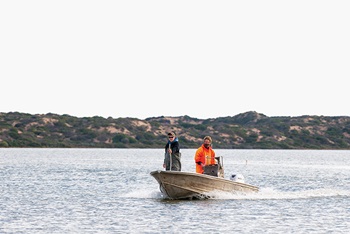 Tucker Sheehan and Glen Hill at work on the Coorong.

Tucker Sheehan was invited to spend time at the Coorong by Glen and Tracy Hill when they visited Pembroke in early 2016 as part of an FRDC-supported study tour of community-supported fisheries. (See the June 2016 issue of FISH for more on the study tour.)

His father, Tim Sheehan, is a marine biologist-turned-clam trader who supplies a larger distribution business that services markets and restaurants on the eastern seaboard down to Boston and New York.

The family business has given Tucker Sheehan a keen insight into the role of the fishery in the community.

“It’s really the only income for low-skilled people, and it’s one of those jobs where what you earn relates directly to how hard you work. So some people work just enough hours to sustain a hand-to-mouth existence, others put in long hours and make good money. If you take it seriously you can earn $US50,000 to $US60,000 a year.

“After I graduated from high school I earned $20,000 in three months, going out at every low tide. It enabled me to pay for my first year of college in cash.

“But unfortunately we see in our community the debilitating effects of low education or drug addiction. A lot of people make good money and lose it just as quickly, but at least the clamming gives them a chance.”

Because of clamming’s capacity to provide an income for the unskilled, the disabled or people with drug or alcohol problems, local poverty alleviation was part of the Sheehans’ business plan when they started. Pembroke is in Maine’s poorest county, where 20 per cent of the 32,000 residents live in poverty. This has made the Sheehans creative problem-solvers for the local clammers. They make the tools and baskets that people use and guide them through the regulatory processes. They are vocal and practical advocates for the fishery’s potential to lift the local economy.

The clams from the fishery resemble an Australian cockle, but much larger: ranging from the minimum legal size of five centimetres across up to 12 centimetres. The clams are harvested with a handheld rake that looks like a bent pitchfork, and fishers are paid by weight.

Clammers need two licences, one local and one state, which cost $US50 and $US100 respectively. Tucker Sheehan says there are about 150 licensed clammers supplying his family, but only about 20 would be considered full-time or regular.

The fishery is considered robust in terms of sustainability, but is closely monitored nonetheless. Every clammer has a card on which they have to record the time and date they fished, where they fished and for how long they fished, and this information has to be submitted when they sell their catch. This data and the weight of the catch is sent to Maine’s Department of Marine Resources. Failure to provide the information incurs a US$400 fine.

While the department keeps a close watch on the take, the fishery itself is largely self-regulated. “Clammers generally move on to a new beach before having to be asked,” Tucker Sheehan says. “And if a beach is closed because stocks are getting low it only takes a few months for the population to replenish itself, especially in the warmer months when the microorganisms the clams feed on are in abundance.”

While he plans to stay in the fishing industry, “but more on the science side”, Tucker Sheehan says working on the Coorong was a fascinating experience and he will be watching with interest how the fishery manages its future. One of his main hopes is for the fishers to get a fair hearing in the public debate about small commercial fisheries, which some also see as impeding recreational fishing.

“The general impression I gained is that there is an attitude that dismisses what the fishers say because they are not scientists – a crazy situation because they know more than anyone about the water, the species, the population densities, the state of the environment generally. Their livelihoods depend on that knowledge.” 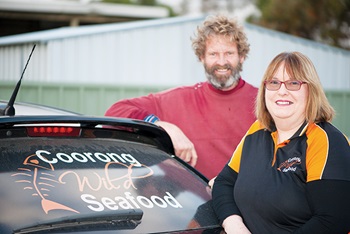 Glen and Tracy Hill, marketing the virtues of a sustainable community fishery.

To be a fisher

Glen Hill has fished on the Coorong and adjacent lakes for 25 years and cannot imagine life without the daily routine of cold pre-dawn starts, motoring out to place a net in the opaque brown waters, years of experience guiding where he works from day to day, hauling in the net, holding the fish in an ice slurry, then back to the processing shed and later the cleaning, filleting and marketing.

“Some days nothing works, and then come the days when all your efforts come together and you get a great result: a good catch,” he says of the variety and uncertainty of the job.

“To be a fisher is to be drawn by something deep inside you,” he says. “When I was a small boy I would stand for ages in front of a local fish shop window in Melbourne. My mum would go off and do the shopping and leave me there. I was mesmerised by the fish. Still am.”

The study tour on which Glen and Tracy Hill met Tucker Sheehan’s parents was to investigate community-supported fisheries in the US.

Glen Hill says the idea of a community fishery is to garner local understanding and support: “Commercial fishers have been very poor at promoting their value in terms of local jobs, health benefits and sustainable management.

“In the US, one example we studied was in a small town in Oregon called Port Orford, about 700 kilometres north of San Francisco. The fishers there started getting community support by offering people a chance to buy into their activities,” he says.

“Broadly speaking, it was about people putting in some money up front and then once a week or once a fortnight [and] getting a hamper of fresh fish. Other fishing communities up and down the west coast were doing something similar as a way of promoting themselves and their value to the community.

“Similarly, our challenge back home is to increase awareness of who we are and what we have to offer.” 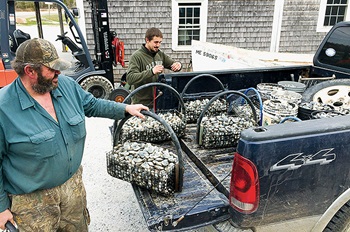 Tracy Hill says that for them a community fishery is about maintaining strong relationships between fishers and their markets, and establishing a clear identity for the fishery.

She explains how their business, Coorong Wild Seafood, builds personal supply relationships with upmarket restaurants or distributors servicing independent supermarkets. Benchmarks are put in place for quality and supply reliability.

“We have put a lot of effort into marketing, and have attended workshops, Regional Development Australia courses, and social media and management courses. But the standout influence, for us, has come from attending Seafood Directions conferences. That has been one of the keys to growing our business. It took us from just being Glen and Tracy down at the Coorong trying to work things out by ourselves to being part of a large body of expertise.

“From this has come a more focused approach to marketing and the development of a diverse product range: adding smoked and frozen products to the fresh product and developing our own distinctive brand and label.”

The Hills are also working with a local distributor on a value-added product for the native foods market and are even hoping to extend this to an export product.

Tracy Hill says their business is based on building relationships with customers and the supply chain and selling people the values of an MSC-certified fishery.

“We then back this up with the way we operate so that our integrity and values are obvious. It can’t just be talk … your story has to be genuine.”