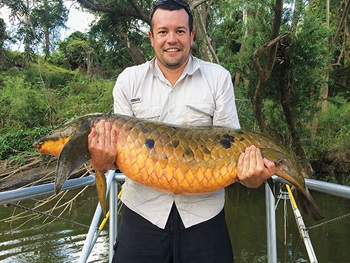 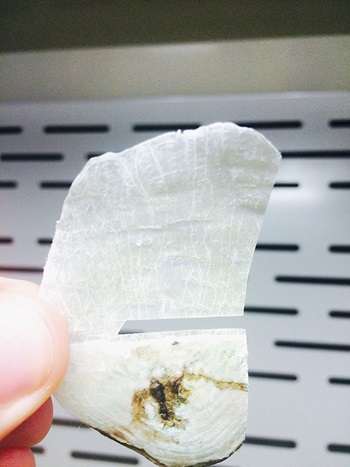 With air-breathing lungs and fleshy, paddle-like fins that contain limb-like bones, the Australian Lungfish (Neoceratodus forsteri) looks like something from prehistoric times. That’s because its morphology has remained largely unchanged for the past 100 million years.

But this living fossil is under threat. The Australian Lungfish is listed as vulnerable under the Environment Protection and Biodiversity Conservation Act 1999. It is found only in several rivers, dams and lakes in south-eastern Queensland, and there is concern that many of these populations are experiencing poor recruitment.

Researchers have been struggling to understand exactly what is happening to the lungfish population, in part because they have not had a reliable method for ageing them. Accurate information on the age structure of a species reveals the growth, longevity and mortality characteristics of a population. Without it, researchers can’t be sure which years are associated with poor recruitment, let alone investigate its causes.

Other bony fish have solid calcified ear bones called otoliths that lay down annual growth rings, but lungfish otoliths are gelatinous, making them unsuitable for ageing in this way. Attempts to age lungfish using growth increments on their scales had also proven unreliable, until researchers turned to a radiocarbon-dating technique for fish developed as part of FRDC-funded research more than 20 years ago.

“Extensive testing of nuclear weapons in the 1950s and ’60s caused a dramatic increase in the levels of carbon-14 in the atmosphere and oceans,” says Stewart Fallon, head of the Radiocarbon Dating Laboratory at the Australian National University (ANU). “This was incorporated into the cells of living things and has left a unique carbon-14 signature in organisms born during this period.

“We had several lungfish whose birth dates occurred pre-bomb, or pre-1954,” he says. “By taking measurements from the scales of those fish, we were able to see both the sharp increase and decrease in carbon-14 associated with the nuclear testing, to give a sort of ‘lungfish reference curve’ from which we could age the other fish.”

Bomb radiocarbon-dating techniques for fish were developed by former ANU researcher John Kalish, who was the principal investigator on a 1993 FRDC-funded project that was among the first to investigate the feasibility of this method.

“When I first did this work in the early 1990s, the person who ran the equipment I used said, ‘There’s no way you’ll see anything. It won’t work,’ ” John Kalish says.

Yet his results showed an almost perfect relationship between the amount of carbon-14 in corals, which was the focus of previous research, and that in the otoliths of long-lived Snapper (Chrysophrys auratus). With the FRDC funding he investigated the broader applications for age validation with an additional 28 commercially important species and found the method was reliable in almost every case.

John Kalish says the bomb radiocarbon-dating technique has now become a routine and cost-effective method for verifying the ages of a wide range of fish species including, it seems, those lacking solid otoliths, such as lungfish. The technique is applied to the fish scales, which also has the advantage of being a non-lethal approach to age testing.

Stewart Fallon’s work on the Australian Lungfish has found that fish from the Mary, Burnett and Brisbane Rivers can live for more than 70 years, but he is interested in the overall population structure.

“If we know which age groups had poor or no recruitment, then we can start to look at environmental factors in those years, like flooding or drought, and see if they correlate,” Stewart Fallon says.

The ageing work is part of a larger Australian Research Council Linkage Grant project looking at the age structure, population size and genetic diversity of the Australian Lungfish.