As FRDC’s manager of market trade and communications, Peter Horvat travelled to Belgium for the Global Seafood Expo this year. On the way, he found himself tracing the steps of Australia’s Yellowtail Kingfish on a similar route to international destinations. It was a chance to discover first-hand how and why this fish is winning the hearts of the world’s leading chefs and seafood suppliers 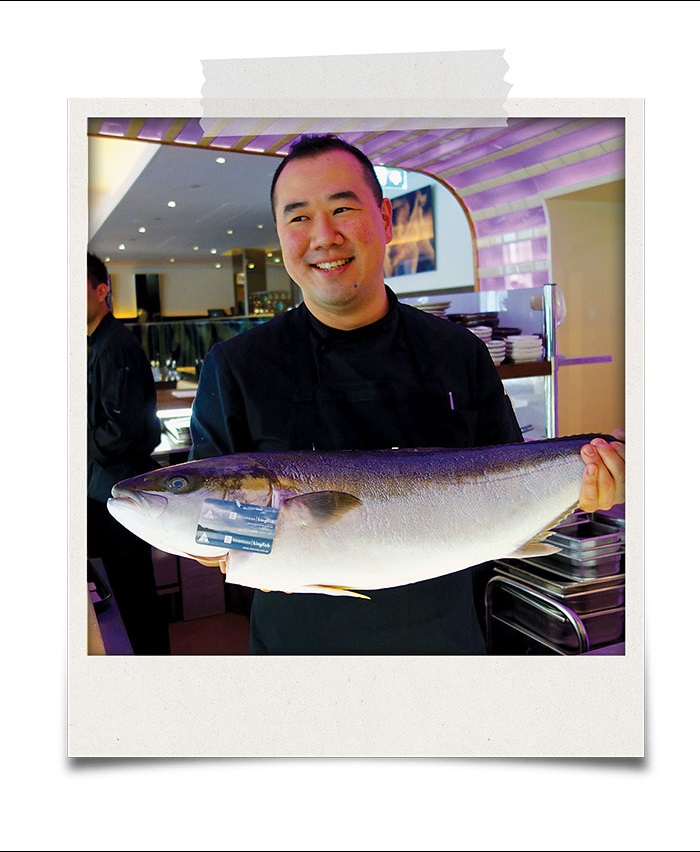 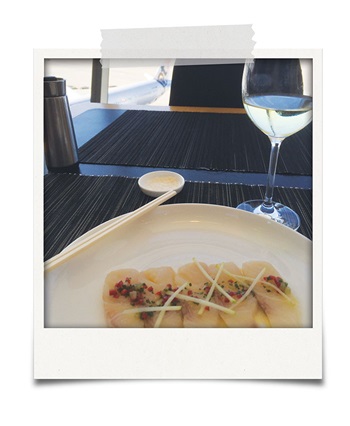 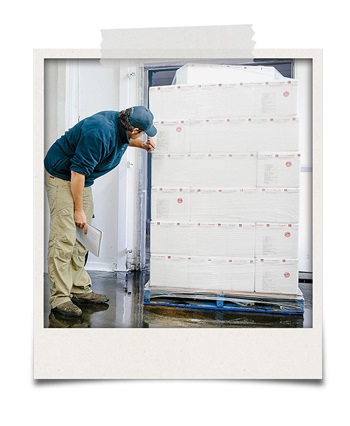 Grown in the clear blue waters of Arno Bay in South Australia, near Port Lincoln, Cleanseas Tuna’s Yellowtail Kingfish (Seriola lalandi), marketed as Hiramasa Kingfish globally, spends two years growing from a fingerling to a healthy four to five kilograms before it is harvested. From there, this South Australian ventures out into the world to find its markets, travelling far and wide to grace some of the world’s finest tables.

Fresh from harvest, the fish go directly for processing at Port Lincoln. There they are carefully packed into foam cartons to keep them in pristine condition for transport around the country.
Some of those destined for more distant markets are processed – cleaned, gutted, filleted and sealed in packaging – before being snap frozen down to minus 60ºC, keeping the fish at its highest (sashimi grade) quality. These are then packed into shipping containers for transport around the globe. Others are packed fresh and sent by air.

My first encounter with kingfish on this journey is at Sydney airport, where it is on the menu in the Qantas International Lounge. Renowned chef Neil Perry is an adviser to Qantas. He also features kingfish in a number of his restaurants. He has been using the fish for many years, its versatility and culinary attributes keeping him a fan.

In the Qantas International Lounge it is served lemon-cured with carrot, daikon and the classic Vietnamese nuoc cham sauce. The balance of salty, chilli and sweetness perfectly complements and accentuates the soft, rich texture of the kingfish.

Next stop, the fish and I go international – to London. On my way to the Global Seafood Expo in Brussels I stop off there to meet with Wine Australia and also drop in to Southern Aqua, a European specialist sales and marketing agency. Southern Aqua’s Jamie Angus explains that the fish arrive either by air or sea, depending on how they have been processed and which market they are destined for.

“Obviously air allows us to get the fish from Australia to Europe very quickly, ensuring freshness. In some cases the fish can be in Europe within a day of being harvested,” he says.
“From there we break down the shipment, working with local distributors and suppliers to fill orders from restaurants and customers around the United Kingdom.”

For a company like Southern Aqua, the aim is to combine great customer service, contemporary marketing tools and innovative logistics models to provide a complete solution for clients, such as Cleanseas Tuna, that are looking to establish business across Europe. Southern Aqua supplies to chefs, retailers and distributors in every corner of Europe. 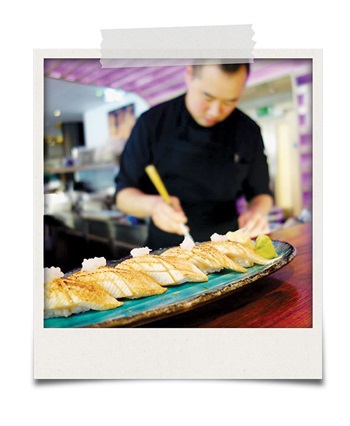 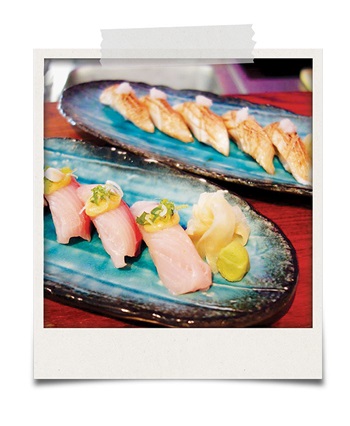 Examples of Kingfish Maki with Yuzu.

One of Southern Aqua’s customers with a true appreciation of the Yellowtail Kingfish is chef Gohei Kishi, head of Asian concepts across the Gordon Ramsay Group, and sushi head chef at the restaurant Maze, in central London.

“The secret to preparing great seafood,” says Gohei Kishi, “is to know the product so well, you can extract the optimal flavour out of it. A great chef understands this and knows what to do and when.”
Gohei Kishi’s approach to cooking reflects his heritage. Born in France to Japanese parents, this merging of two cultures flows into his work at Maze. (His twin brother, who works for the Gordon Ramsay Group in the United States, has followed a different path, focusing on French cuisine.)

It is clear Gohei Kishi has some strong foundations to his approach to food – quality, consistency, flavour, and a thirst for learning more. These translate into the produce he sources from around the world, including Australian Yellowtail Kingfish. It is a philosophy that also aligns with his Gordon Ramsay Group role of ensuring consistency and quality.

“The story behind the fish also interests me,” he says. “I know the fish comes from Australia and it is used in many great restaurants around the world – it is a global product. For me, it is good to see how others are using the product. It also provides a great deal of confidence in the quality.

“I like that the fish comes in whole. It allows us to see its quality. We can see this also when we cut the fish. I think it gives our chefs an appreciation for the product and helps them learn how to cut and break down the fish.

“We prepare a range of seafood including hamachi, salmon and tuna, and the texture and flavour of the Yellowtail Kingfish is different. It has less fat but more structure than the hamachi.”

These traits make Yellowtail Kingfish ideal for nigiri, maki, carpaccio and tartare. While these are cold dishes, Gohei Kishi says he would like to take the fish further in the future by applying some classic French techniques to cooking it. 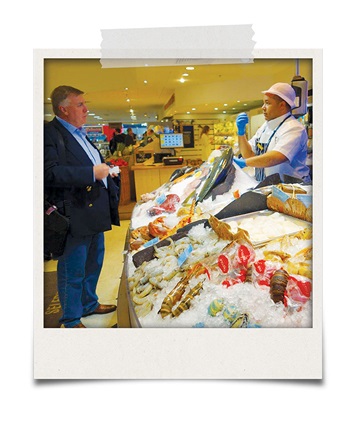 Serendipity has put David Head, the new CEO of Cleanseas Tuna, in London at the same time. He is also on his way to the Global Seafood Exposition, and making the most of the chance to gain some first-hand insight into what his international customers think of Cleanseas Tuna’s new product.

David Head has more than 25 years’ experience as a chief executive in Australia, New Zealand, Asia and Europe, working with multinational corporations including PepsiCo and Lion Nathan. He has accepted the challenge to expand the market for Cleanseas Tuna’s Yellowtail Kingfish.

Gohei Kishi tells him that customers clearly like and appreciate the product, both from a taste perspective and the story that accompanies it.

Our next stop is the iconic Selfridges retail outlet. We meet Matthew Couchman, who is responsible for supplying sustainable seafood to the store. This ranges from a myriad of locally caught fish and crustaceans to the bright-blue New Zealand Paua (abalone), MSC-certified Australian Spencer Gulf Western King Prawns and Cleanseas Tuna’s Yellowtail Kingfish. Matt Couchman has a lifetime of experience with seafood, including some time in Australia. He knows his fish and sees the value in having Australian product in his star-studded line-up. “I know the story of the fish, I know where it comes from and the ethos behind it.”

He says this is as important as knowing its culinary characteristics. The Yellowtail Kingfish is well known for its raw characteristics, but people are now seeing its versatility for a range of cooked dishes as well.

Next up, it’s back to the restaurant environment, where two cultures collide in a culinary crescendo.

Looking out over central London through the floor-to-ceiling windows of SushiSamba on the 38th floor of the Heron Tower, it is hard to envisage how a fish from Port Lincoln ends up here in this hip fusion restaurant half a world away.

SushiSamba showcases the blending of Japanese, Brazilian and Peruvian cuisine. It is a mix that resulted from the emigration of Japanese in the early 20th century to South American cities like Lima in Peru, and Sao Paulo in Brazil, where the integration of cultures flourished.

Head chef Tai Po Wong, a 16-year veteran of Japanese cuisine, is another keen user of Australian Yellowtail Kingfish. The restaurant serves the fish in a variety of ways ranging from classic Japanese to South American and a fusion that brings the two together, using techniques such as sushi rolls that incorporate Brazilian flavours. 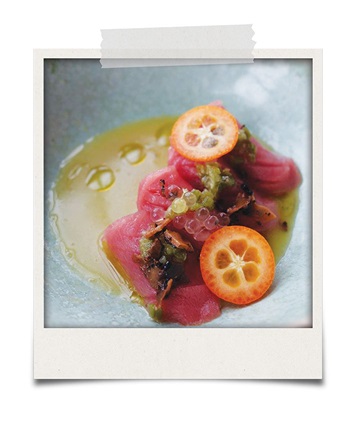 Above: Kingfish ceviche at SushiSamba. 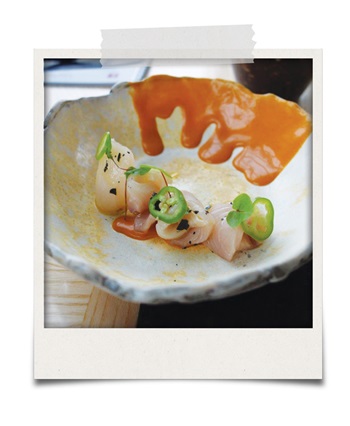 Kingfish at SushiSamba with a mole-style sauce.

Wing of kingfish chargrilled on the SushiSamba churrasco.

Tai Po Wong uses the soft, creamy texture of the raw kingfish to its full potential, matching it with markers of colour, taste and texture that take diners on a journey through the two regions. Several dishes are clearly inspired by South America – crispy empanada shells, reminiscent of small tacos, hold the delicately diced fish, which is dressed with a spicy chilli sauce and lime-driven ceviche kingfish. Other dishes, such as slices of sashimi served with a mole-style sauce, traverse the boundary between the two.

In addition to being served raw at SushiSamba, the Yellowtail Kingfish is also char-grilled over the coals on the churrasco. Tai Po Wong highlights how popular the wings from the kingfish are. “The flesh around the wings contains a number of different textures. The grill provides additional layers of flavour – smokiness and caramelisation on top of the creamy white flesh beautifully showcases the fish.”

It is clear from speaking with Tai Po Wong that understanding the products he buys is very important. This knowledge contributes to an understanding of how best to prepare the product and is the foundation of what he does. The dishes should reflect the produce, culture and skill of the chef, he says. And from what I’ve seen, they do.

Following Cleanseas Tuna’s Yellowtail Kingfish, it is clear that the company’s export rationale involves a number of considerations. Market size and financial drivers are important. Europe provides a sizeable market with customers willing to pay the price for the quality product they receive.

However, this is not the only factor. Good supply-chain partners and customers with a place in the market, such as Selfridges, support the decision. Throw in key users such as celebrity chefs Gohei Kishi and Tai Po Wong who value the product because it meets their high expectations and specifications, and the rationale to export strengthens.

For Cleanseas Tuna, sales growth has continued in the Australian and European markets, and the company is developing new fresh and frozen products targeted at food service and retail markets. In addition, it is looking to re-enter the US and Asian markets with a prime-grade sashimi product.

David Head says he has joined at a good time. “Over the past four years Craig Foster (who retired in late 2015) and the management team have made great progress restructuring the business and in particular the company’s aquaculture operations. I am looking forward to leading the company through its next phase of growth and development.”

Looking at the journey of kingfish, or any other fish, it’s clear there are several reasons why exports are important. They obviously provide value to the company selling the fish.

But further – and this is certainly the case for Cleanseas Tuna’s Yellowtail Kingfish – exports add value to what we do here in Australia. The reputation of where the fish is grown, how it is handled and how it tastes all tell a compelling story that chefs and consumers around the world are willing to pay for.

Home in Australia, that story still has resonance. You don’t need to visit London to try some of the best fish on the planet; it is right here on our doorstep. A visit to most fish shops will land you the same fish the world’s top chefs are using. And for me, being able to serve great fish to friends is a pretty good position to be in.