Innovation is critical to the future of sustainable fisheries and aquaculture production. So how does Australia’s performance stack up?

Australia’s innovation in fishery and aquaculture industries can now be more readily compared with other countries as a result of a new web-based initiative from the Organisation for Economic Co-operation and Development (OECD). 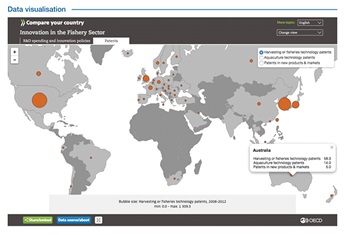 A screen shot of the new OECD web portal comparing fisheries innovation by country, based on the number of patents lodged.

The Fisheries and Aquaculture Innovation Platform uses several criteria to measure innovation. These include patents lodged for new technologies, national spending on research and development, and an assessment of government policies, organisations and research networks, to support innovation that highlights the role of the FRDC.

Innovation can be difficult to quantify. The FRDC sees the OECD platform as an excellent first step, although it does not perfectly measure the achievements of a country like Australia, whose success in knowledge creation is often not reflected in patents or other commercial opportunities. Comparing innovation across different countries is an imperfect exercise, faced as it is with the challenge of reconciling different systems and cultures.

Based on the number of patents lodged, Australia ranks ninth for innovation in harvesting and fishing technologies, with more than 50 patents between 2008 and 2012. The US leads this field, with 1309 patents during the same period, followed by South Korea with 957 and Japan with 300.

The aquaculture innovation rankings for 2008–2012 were led by South Korea (439), the US (369) and Germany (118). Australia ranked 19th with 14 patents for related technologies. The web-based platform also provides searchable international databases of 372 research organisations, 36 research networks and more than 300 projects. The information has been collated from publicly available data, although further contributions to the databases are being encouraged to make them more comprehensive, and to help identify research gaps and expand the potential to find new research partners.

The OECD launched its Fisheries and Aquaculture Innovation Platform last year as an addition to its already extensive international data-gathering efforts, which cover a broad range of social and economic activities, including education, employment, trade, science and social welfare.

While innovation is not an end in itself, the OECD identifies it as crucial to sustained growth and the creation of economic opportunities, providing the foundation for new businesses, new jobs, and resilient and adaptable economies.

It says that over the next few decades, population and income growth, together with urbanisation and dietary diversification, are expected to create additional and greener demand for fish products.

“To meet these needs, fish production has to be efficient without harming the environment or using natural resources irresponsibly. It is essential to establish new patterns of production and consumption in order to help decouple growth from natural capital.

“Governments play a key role in fostering a sound environment for innovation, by developing policy frameworks that enhance policy coherence, investing in innovation, empowering people to innovate, helping firms overcome barriers to innovation, facilitating the role of knowledge diffusion and ensuring that innovation contributes to key goals of public policy.”

The Australian government has pledged to encourage innovation. One avenue for this is supporting research in collaboration with industry groups. The FRDC is already a leader in collaborative research in the fisheries sector. For the FRDC, its engagement with stakeholders to identify ways to advance innovation – through its ‘lead, collaborate, partner’ strategy – is innovative in its own right.

What is the OECD?

The Organisation for Economic Co-operation and Development was formed in 1961, by 20 member countries, to stimulate markets and trade. Through shared information and analysis, it aims to help governments assess opportunities and develop policies to support economic growth and prosperity. The OECD has expanded to include 34 countries. Australia joined in 1971.