The FRDC is pleased to announce the appointment of a new chairman to its Board – former Queensland National Party Senator Ron Boswell. Ron Boswell is set to take over from current FRDC Chairman Harry Woods on 1 September 2016 for a three-year term.

Ron Boswell comes to the FRDC after a long and eventful career in the Australian Senate, where he was known as a champion of regional and rural Australians and a supporter of small business. He retired from the Senate in 2014, where he had served for 31 years, making him one of Australia’s longest-serving Senators.

Of particular note for his new role with the FRDC is the prominent role he took in the political debate on fishing rights in relation to marine parks – namely the Great Barrier Reef Marine Park reforms. This ensured an outcome that benefited all stakeholders, while affording the reef the recognition and protection it needed. During that time Ron Boswell worked closely with both commercial and recreational fishing groups. 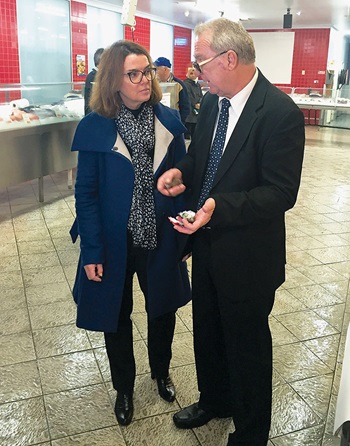 The FRDC is sad to farewell outgoing Chairman Harry Woods. He will be remembered by FRDC staff with affection. He is well liked for his considerate approach and effort to get to know staff members. The FRDC thanks him for his six years as Chairman. Harry Woods has steered the FRDC through a period of great transition, overseeing the launch of its new RD&E plan in 2015 as well as a period of corporate revitalisation, which culminated in the opening of the new Adelaide office earlier this year.

Following the federal election in July, South Australia’s Anne Ruston has retained her position as a state representative in the Australian Senate. Barnaby Joyce was also re-elected, and continues as Deputy Prime Minister and Minister for Agriculture and Water Resources. Senator Ruston will remain in her supporting role for Minister Joyce, with the title of Assistant Minister for Agriculture and Water Resources. She continues to oversee the fisheries and aquaculture aspects of the national agriculture portfolio.

A new oyster-processing system devised by South Australia’s Bob Simmonds has the potential to revolutionise oyster markets, making live oysters more widely available and easier to open by oyster expert and novice alike. It could be to oysters what screw-top bottles have been to wine, improving consumer access, ease of handling and product quality.

It is a simple approach – shaving the shell at the lip of the oyster creates a small opening into which a knife can be inserted to open the oyster. The opening is immediately sealed with wax, keeping the oyster alive and in pristine condition, complete with the oyster liquor, which is usually lost in the traditional processing of oysters.

“It will meet demand for fresh, unopened product, particularly in Asia, and allow us to brand it clearly as a product of Australia,” he says.

The FRDC secured further funding to automate and commercialise the system through the Rural Research and Development for Profit programme with a grant of $427,000. This was done collaboratively with Oyster Bob, Angelakis Bros and Tassal Operations Pty Ltd.

Worldwide patents for the process are owned by the FRDC.

In the Queen’s Birthday 2016 Honours list, Victorian Robert Burn received a Medal of theOrder of Australia (OAM) in the General Division for services to marine science, and in particular to the study of the nudibranchs members of the mollusc family, commonly known as sea slugs.

A builder by trade, Robert Burn is recognised as an international expert in the creatures, identifying almost 100 of the hundreds of species in Australian waters over more than 50 years. “They’re the most gorgeous little animals,” he says. Much of his knowledge is compiled in Nudibranchs and related molluscs, published by Museum Victoria last year.