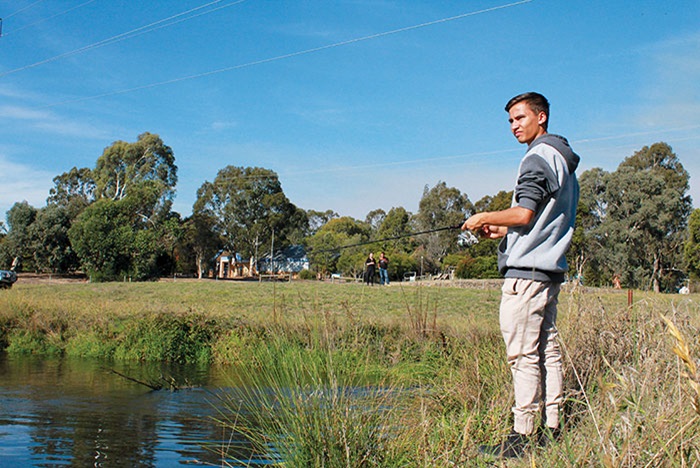 If you look at the sandstone walls that make up old parts of Sydney you can see the remains of ancient middens stuck between the blocks – evidence of ancient fishing practices and thousands of years of feasting on shellfish by Indigenous people. Michael Gilby, Aboriginal Project Officer with Fisheries Victoria, himself a Barkindji man from Mildura, uses this as an analogy for how traditional practices are often hard to discern even though they are embedded in the world around us.

Far from Sydney, near Eildon in Victoria, the Taungurung Clans Aboriginal Corporation has met with staff from Fisheries Victoria, the Monash University Gukwonderuk Indigenous Engagement Unit, Monash Country Lines Archive and the FRDC as part of the Taungurung Cultural Fishing Retreat. The weekend event was part of an FRDC-funded project with Fisheries Victoria that aims to document cultural fishing practices in Victoria.

“Maybe our mob didn’t use fishing rods, but this,” Michael Gilby says, holding out a fishing rod, “is a tool to talk about traditional techniques, to access past customs, whether that was spears or using traditional fishing gear, nets, eel traps or anything else. 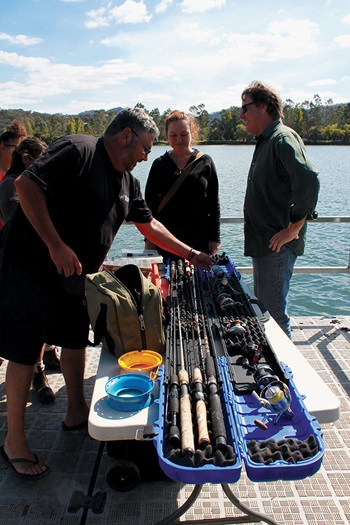 The retreat was designed to begin a process of connecting to culture and country by fishing together, meeting fisheries managers and simply being together to talk about fishing. It aimed to document information, including the medicinal value of aquatic plant life, how local people kept pools fresh in times of drought and how important fishing was for subsistence.

The event was held near Eildon at facilities of the Holmesglen Institute of TAFE, which is part of Taungurung Country. The Taungurung people are at an exciting point in their history, having begun negotiations in May last year to recognise their rights over land in parts of central Victoria. The Taungurung Clan is the first traditional owner group to negotiate a settlement directly with the Victorian Government under the Traditional Owner Settlement Act 2010, which allows traditional groups to agree to out-of-court native title settlements.

Taungurung country stretches from Kilmore in the west of Victoria through to Wangaratta in the north, eastwards to Mount Beauty and south to the top of the Great Dividing Range. The Taungurung Clan call themselves the first people of the rivers and the mountains.

The Taungurung Cultural Fishing Retreat is part of a wider clan process of reconnecting and rediscovering culture, some of which involves fishing. For the FRDC-funded project led by Michael Gilby, it is a way of jump-starting the process of gathering and documenting traditional practices so that Indigenous culture around fishing can be taken into account in fisheries management practices.

Lawrence Moser is CEO of the Taungurung Clans Aboriginal Corporation. “Fishing is just one avenue that Taungurung might be able to use to re-engage with culture and connection to country,” he says.

He grew up outside Taungurung country and only later discovered his roots. But he says he always had a connection to fishing through his grandmother, who would catch cod to sell using handlines. “I’m quite adamant that fishing for our mob was part of our cultural practices and I take that for granted, it’s innate,” he says.

His grandmother taught him that if you take the air sac out of a Murray Cod without breaking it, and press it between two sheets of paper, as you would a flower, you are left with an imprint that is the shape of the tree that the cod was born beneath.

Little clues embedded in stories like this, in family histories and memories, can be the seeds from which cultural practices are rediscovered. This in turn can lead to greater understanding of how waterways like those around Eildon functioned before colonisation, and this has implications for how fisheries can best be managed.

For example, while the current wisdom is that Taungurung country is devoid of eels and that the people here did not fish them, as a knowledge holder of her people’s traditions, Lee Healy tells a different story. Lee Healy has been weaving for 30 years. She knows which plant fibres to collect and at what time of year to collect them. She weaves traditional baskets that women would have used, and she also weaves eel traps.

“We know that eel fishing took place on Taungurung country, but we have to go back to diaries and talk to Taungurung people,” Lawrence Moser says. In this way the project aims to follow the leads that arose during the retreat to discover greater understanding.

Insights into how waterways used to operate are among the reasons that Fisheries Victoria is keen to engage with traditional owners. Activities on the first day of the retreat included fishing in Lake Eildon and a tour of the Snobs Creek Hatchery, with a presentation by senior manager of Fisheries Victoria’s freshwater fisheries, Anthony Forster.

“One of the things we really want to know,” says Anthony Forster, “is just what things were like before the period of colonisation. We are dealing with highly modified waterways, where 70 per cent of water is used for irrigation and most native fish are threatened. We want to work out how to restore habitat. We are keen to work with Indigenous people and I see lots of ways we can engage. Indigenous communities are a missing link in improving and celebrating our fisheries.”

Fisheries Victoria is keen to identify ways in which Indigenous Victorians and fisheries resource managers can benefit from working together. This is as much about finding new ways to engage with country as it is about looking to the past to discover how Indigenous ancestors did things.

Discussions at the hatchery made it clear that a new era of engagement was on the table – moving forward with a conversation rather than a directive. It was agreed that the Taungurung would be involved in the Eildon Fishing Festival, performing a welcome to country and taking part in Fisheries Victoria reference groups.

Opportunities around the restoration of riparian habitat is a promising area for engagement that was frequently discussed during the weekend. Riparian habitat consists of the area from the water’s edge to about 30 metres up the embankment, and it has often been destroyed. Ecologically it is important as habitat for animals both in the water and on the shoreline, and plants that shade waters affect what can live there. Rich in diversity and activity, the restoration of these habitats is a key area where Taungurung cultural knowledge has much to offer.

Inter-generational transfer of knowledge is a key motive for both the Taungurung Clans and the FRDC project, which will develop maps overlaid with history, stories and cultural practices.

Shannon Faulkhead, from the Monash Indigenous Centre at Monash University, has worked with a number of Indigenous groups around the country to animate stories of creation on their country. Resources such as videos and animations provide both educational tools to maintain knowledge, and act as a catalyst for remembering and gathering more information.
“We are remembering things we didn’t even know we knew,” Shannon Faulkhead says. “What we find is that someone might have told us a story, and we’ll remember other things from watching an animated version or from the kids asking questions about it.”

There is consensus from the group that work should be done to create content around the seasonal calendar, bark canoes, Spiny Freshwater Crayfish, and native fish and eels. These will become an educational resource for Taungurung people and the wider community, including children, and the resources will be updated as new information is recorded. Michael Gilby will continue the work begun during the retreat by following up leads and continuing to cultivate relationships.

A second event of this kind will be held on the same weekend as the Eildon Fishing Festival, on October 15 and 16.