Fisheries Congress set to bring the world to Adelaide

The 2016 World Fisheries Congress in Busan gave Australian delegates a head start on making the next event, in Adelaide, a success 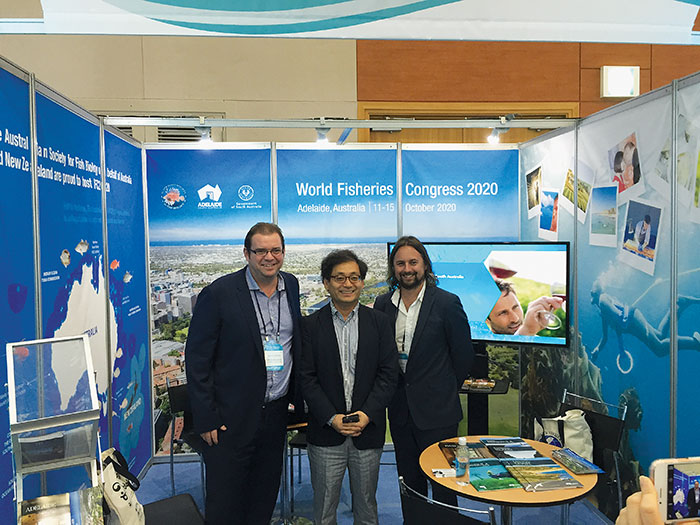 SARDI’s Keith Rowling and Mike Steer with a happy customer at the Australian booth at the 2016 World Fisheries Congress in Busan, South Korea.
Photo: Peter Horvat

Australia has won the right to host the World Fisheries Congress (WFC) in Adelaide in 2020, with the event expected to bring more than 2000 delegates to the city. It reinforces the proactive approach Australia has taken to develop its reputation internationally. Australia last hosted the WFC in Brisbane in 1996.

The theme of the 2020 Congress will be ‘Sharing our oceans and rivers: a 2020 vision for the world’s fisheries’.

The announcement of Australia’s successful bid, just prior to the 2016 World Fisheries Congress, allowed time to put together a small delegation to promote the Adelaide 2020 Congress and to gain first-hand experience of the task that lies ahead.

The 2016 congress was held in Busan, South Korea. This bustling seaport boasts a city skyline that resembles a scene from a science-fiction novel, and belies the city’s 1000-year history. Soaring modern skyscrapers stretch along the coastline, containing the modern infrastructure, technology and business enterprises of a thriving metropolitan centre. Only pockets of the old remain, such as the small dock where elderly women sit and process the day’s catch.

Busan’s affinity with the ocean made it a fitting host for the 2000 delegates, from 66 countries, who attended the WFC.

Make no mistake, the WFC is a major international event that requires planning and global coordination.

In Busan this year there were about 500 presentations from more than 400 speakers, who addressed 48 fisheries-related themes. An additional 260 posters were displayed, and events ran in conjunction with the congress, including a meeting of host organisation, the World Council of Fisheries Societies, of which Australia is a member.

At this year’s meeting of the council, South Australian researcher Bronwyn Gillanders was elected president for the next four years.

A key task for the Australian delegation attending the congress in Busan was promoting the 2020 Adelaide congress.

Australia hosted an exhibition booth and made the most of opportunities to meet and speak with both conference organisers and delegates.

Nearly all of the congress delegates experienced some of South Australia’s iconic tourist attractions, including Port Lincoln, the Barossa Valley and Kangaroo Island, albeit through a pair of 360° virtual-reality goggles.

The goggles were a huge drawcard and ice-breaker that attracted students, esteemed fisheries scientists and other exhibitors. The South Korean Minister for Oceans and Fisheries, Young-Suk Kim, and his delegation, which included Korean media, took a ‘virtual’ tour of South Australia, demonstrating the value and effectiveness of our engagement strategy, attracting shy colleagues and overcoming language barriers. It also fostered considerable networking, with the Australian booth at times resembling a corner table at a relaxed cafe.

Each visitor was given promotional literature (provided by the South Australian Tourism Commission and FRDC) and a WFC 2020 flyer, and was encouraged to register their interest online. All those who provided business cards while visiting the booth, or during congress networking, have been registered to receive further information. During the congress the WFC 2020 website registered approximately 600 visitors and a multitude of interest. The booth at this year’s WFC clearly indicated to the world that Australia is focused on delivering the best event possible.

It also highlighted areas we need to keep our eyes on in preparation for 2020. These include attracting a broader range of delegates, such as fisheries managers, industry companies, processors, supply chains and the fishers themselves, not to mention building a much larger trade show, and working with external agencies to bring delegates from the region to Adelaide, particularly from developing nations. A key reason for Australia to host the Congress in 2020 is to communicate the sustainability and scientific rigour with which our fisheries are run.

Australia has started the discussion. Now we must continue to speak with a global audience, and over the next three years visit and participate in World Council of Fisheries Societies meetings. This will allow us to promote the conference and source the best speakers from the international fisheries fraternity.