Evolution of quality and collaboration 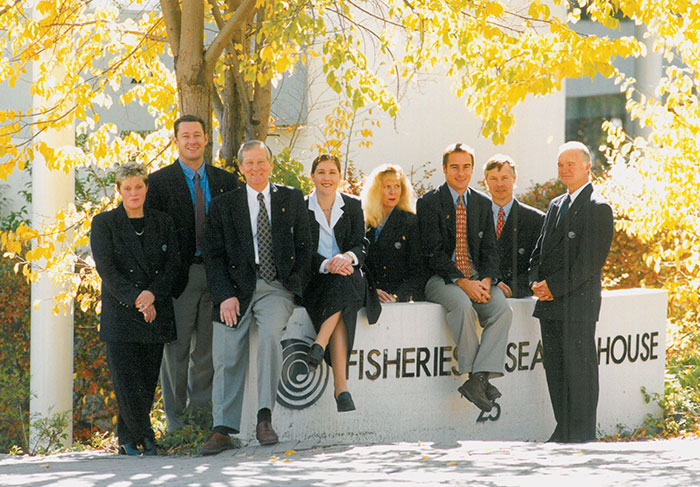 The FRDC is one of Australia’s 15 Research and Development Corporations (RDCs), a partnership between fisheries and aquaculture sectors and government that reached its 25-year milestone this year.

From its inception on 2 July 1991, the inaugural executive director, Peter Dundas-Smith, and chair, Bill Widerberg, implemented a quality management approach to all aspects of the FRDC’s business practices. This saw the FRDC become the first Research and Development Corporation to achieve third-party certification as a quality organisation.

We were the first RDC with real-time integrated accounting and project management systems. We were one of the first organisations to have an electronic application system, although we have moved from five-inch floppy disks to live access via the internet. This allowed the FRDC to ensure information entered on a project application never had to be re-entered, and that the financial management system was always able to provide detailed reports on the FRDC’s financial commitment and expenditure for stakeholder reporting.

When I first started at the FRDC we were still a relatively naive organisation in terms of our planning and income and how we did our work. We had moved from thinking of research and development as a grant to thinking of it as an investment, but we hadn’t actually worked out how you did that.

The first big change was sitting down with industry and developing a better planning horizon. What that did was to drive a more commercial focus to our research, so that people could clearly see outcomes.

There was a lot to develop around planning, prioritisation and building the FRDC business model. That was a big change that took place from around 1997 to about 2007.
Then, at some point we got too plan rich. So the next improvement was building plans across whole sectors or around thematic concepts. We looked at national issues, and drew them together across multiple sectors.

Ecological sustainable development is an example of where we pulled together a subprogram that covered all sectors, including wild-catch and aquaculture. That started to mean we were focused at a much more national level. We went from being jurisdictionally focused, to jurisdiction plus sector, and then to jurisdiction, sector and national.

The other big change that has happened since the 1990s is that initially we had a big push on what we called collaboration. But early on, the only group we pushed to collaborate was researchers. From the mid-2000s we started to push for collaboration within the industry. For example, could you make a case for abalone and rock lobster sectors to collaborate on a project in China where they are in the same market? Sure enough, we’ve been able to do this.

We have continued that collaboration trend. Getting fisheries managers to collaborate has resulted in the development of various guidelines. The Status of Australian Fish Stocks (SAFS) Report is an example of starting to get collaboration between management agencies to produce a single collaborative report.

The next change for the FRDC was diversification of income sources. When we started, we had a pretty limited funding source. It was Commonwealth government dollars and industry dollars and that was about it. Now some of our projects might have two, three or four income streams.

Back in the 1990s, it was rare to see income in a project. Now it is rare that there is not someone else investing in it. And that is quite a change in attitude. If you look back to the ’90s, it is probably fair to say that most people saw research as a cost activity. Now most people can see the investment benefit.

The next big change was operational. When we first started we had a very simple planning cycle – once a year we would fund a national call through what was called the Fisheries Research Advisory Bodies, and that was it. If you look at our investment process now, we’ve got everything from competitive research ideas right through to commissioning of research. We’ve got a much broader suite of investment mechanisms, and they all vary depending on the type of research, development and extension activities.

In the ’90s, we tended to work on pretty simple science problems. How old was the fish? How many eggs did the fish produce? Relatively simple biological-type problems. Now research has become much more complex. It is rare that a single project delivers the outcome you are looking for; often it takes multiple projects to deliver a planned outcome. So those complex problems require complex investment platforms, and they also need people to stay in the planning environment for longer than three years.

Culturally, the FRDC is going to have to change from being an investor in research to more of a service body. So in our new Research, Development and Extension Plan we talk about key infrastructure services the FRDC is going to deliver, such as Fish Names, SafeFish and the SAFS infrastructure. We are going from being a facilitator to an actual doer.

One of the big wins for the FRDC has been in building capability. There isn’t an executive officer on any of the industry councils who hasn’t done one of our leadership or capacity-development programs. That brings cultural change, and those sectors that have invested the most in people development are usually the best-performing sectors. A lot of people didn’t think that people development would produce these sorts of results, and now we are in a situation where people are demanding more of it, which is great.

You get a lot of satisfaction when something actually delivers a commercial outcome, and we have had a lot of successes. When abalone farming went over 1000 tonnes, that was great, and when the prawn farmers started to yield above 15 tonnes per hectare, some of them up to 19 to 20 tonnes, that was an enormous change. That has been fantastic, and being part of the rise of the salmon-farming industry, and the professionalisation of that sector, has been incredibly exciting. 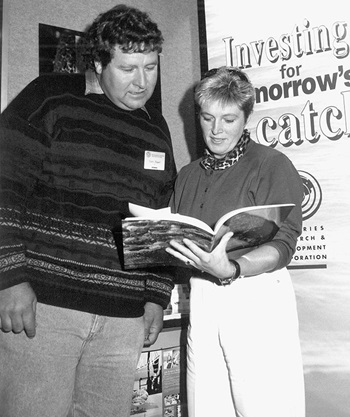 I started at the FRDC in 1992 when there were only five employees – the executive director, the business manager, office and quality manager, program manager and one project manager. I started as an office assistant. They sat me down in front of a computer, I asked what it was and was told that was how I had to work. I had never worked on a computer. At that stage, we had inherited 51 projects from the Fishing Industry Research and Development Corporation, and then invested in an additional 42 projects, bringing it to a total portfolio of 93. We now have in excess of 400 projects.

With a small staff there were always things to do and everyone did everything, even the executive director. You always felt valued, you actually felt like everything made a difference and you gained a lot of knowledge. All final reports were stored in a cupboard with a maroon ribbon around them. At one point we even charged for the final reports based on weight. Now we don’t receive hard copies and we have been evolving to a paperless office – almost. Some sayings come to mind, such as “join the dots”, “the big end of town”, “hit the ground running”, “peaks and troughs”, “think quality”, “don’t do things twice, avoid rework” – these seem to define the FRDC.

I have seen many changes over the years: three iterations of our project management systems, from keying in applications to an online system; the expansion of the FRDC (now with an Adelaide office); a small newsletter that has grown into a national magazine; two office locations; and various chairs, boards, Fisheries Research Advisory Bodies and Research Advisory Committees (so much paperwork). My reason for sticking it out for so long is loyalty, and an ever-changing environment. I have really appreciated that the FRDC has always been very supportive of family, allowing me to attend school activities or be home with sick children. I hold close to my heart all the relationships and friendships I have made with many stakeholders throughout my time at the FRDC and many ex-staff and board members.

Congratulations FRDC on 25 years. It is an honour to serve.