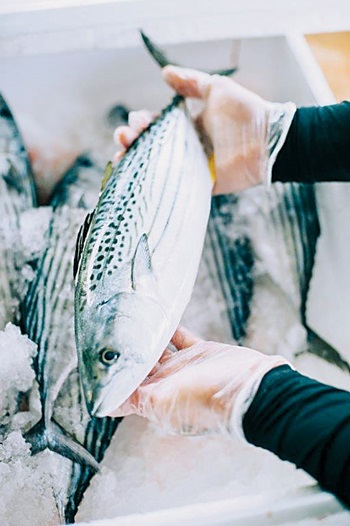 Food-service industry professionals occupy a unique place as both significant buyers of seafood and as opinion leaders. What better way to get the message across about the sustainability of our fisheries than through direct, first-hand experience – as they say, seeing is believing.

One pathway the FRDC has used to connect with the food-service sector is its long-term partnership with the Electrolux Appetite for Excellence program. The FRDC, along with
other Rural Research and Development Corporations, sponsors a regional tour that takes the competition’s national finalists to visit producers.

Having an FRDC representative on hand also gives voice to the science that underpins the fishing practices the group is exposed to.

All 2016 national finalists participated in the week-long tour, beginning on Sunday 3 July, which visited a range of producers in central New South Wales, including Wallis Lake fishers and oyster producers.

The first port of call for the 15 finalists was Wallis Lake Fishermen’s Co-operative in Tuncurry, NSW. The Wallis Lake region is home to a range of fishers, including three trawling boats (fish/prawns), seven lobster fishers, 10 boats in the Ocean Trap and Line Fishery, and 35 lake fishers (crabs, fish and prawns).

Monday morning saw the crew head out on to the lake to watch Wallis Lake Co-op chair and OceanWatch Master Fisherman Greg Golby mesh for mullet and Luderick.

He demonstrated how the net was set from his boat, creating a ring before it was hauled in by hand. The finalists all noted how passive the process was, and how labour intensive. They saw how the fisher could control the quality of fish harvested, and how quickly the fish were placed on ice. This, combined with the fact that the fish was back in the co-op within a matter of hours, guaranteed a very fresh product. 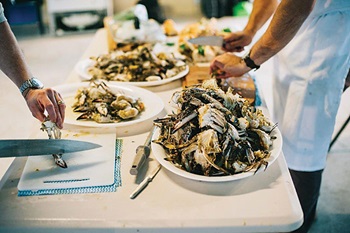 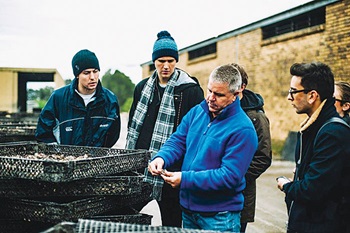 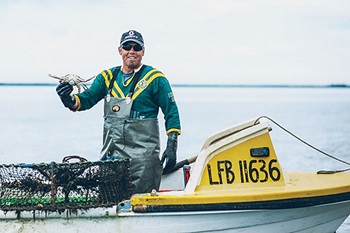 The next stop on the lake brought the group up alongside another OceanWatch Master Fisherman – Danny Elliot. He demonstrated the process to set and pull crab pots, measuring the catch to ensure it met standards for size and quality. The finalists asked many questions about the size, grading, and differences between the sex of the crabs.

As part of the tour and sponsorship, the FRDC organised an informal dinner with the seafood industry, where the finalists got to show off their skills preparing the local product.

Just like the locals, the finalists got their pick of the daily catch. In addition to the mullet, Luderick and Blue Swimmer Crabs they saw being caught earlier in the day, the chefs picked up some local bonito and flathead.

It took them only a few hours to bring together a seafood feast to feed around 60 people. They prepared dishes including oysters with nam jim sauce, bonito in a warm pickle of tarragon and garlic, whole baked Luderick, chilli Blue Swimmer Crab, and spiced barbecue flathead and Luderick fillets. They also managed to produce three desserts – the star being fire-roasted bananas with chocolate and caramelised orange sauce.

Operations manager for the Wallis Lake Fishermen’s Co-op, Suzie McEnallay, said the dinner was a great opportunity to showcase the local seafood industry to the young chefs, restaurateurs and waiters. “The tour group taking the catch from the day and turning it into an amazing seafood buffet was the highlight. The fishers, tour group and local business people also developed some interesting conversations over dinner,” she said.

“It was hard to pick the best dish of the evening – between bonito ceviche, chilli Blue Swimmer Crab, flathead and the Luderick dishes, my favourite may just be the bonito ceviche.”

The next morning, a bleak and overcast Tuesday, the group headed out to meet Richard Ellery at Graham Barclay Oysters. Barclay Oysters is a third-generation business that produces quality oysters and supplies statewide. Richard Ellery explained the process of growing an oyster from spat right through to harvest and then on to the plate.

A key part of the discussion revolved around when their oysters came into prime condition for sale. Richard Ellery highlighted that Wallis Lake oysters hit prime condition later in the year, around Christmas time and during summer. Others further south reach prime condition during winter, before spawning.

Having spent the previous day on the water, the finalists also appreciated the pristine conditions in which the lake oysters were grown.