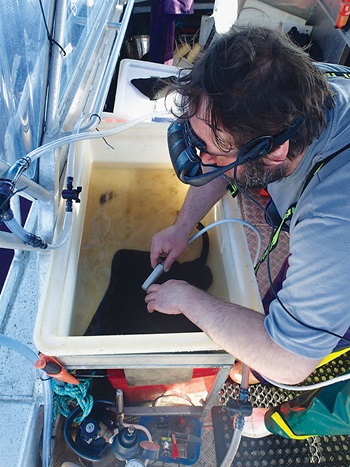 Researcher Justin Bell examines a female Maugean Skate by using a portable ultrasound to assess the size of the eggs and whether it is reproductively active.

Australia, and specifically Tasmania, is home to what is possibly the rarest skate species in the world. Officially identified in 1988, the Maugean Skate (Zearaja maugeana) has only ever been found in two locations: Bathurst Harbour and Macquarie Harbour – both on the west coast of Tasmania.

The Maugean Skate was listed on the endangered species list in 2004, under the Environmental Protection and Biodiversity Conservation Act 1999. With no reports of the species in Bathurst Harbour for several decades, it seems likely that Macquarie Harbour has become the last remaining habitat of the species.

Shared concerns about the future of the species have brought together scientists, recreational fishers, the aquaculture sector and other business and community interests in the Macquarie Harbour region to learn about the skate and help its conservation.

With such a limited distribution, little has been known about the skate until now. Jeremy Lyle, from the Institute of Marine and Antarctic Studies (IMAS), has led an FRDC-funded project to conduct the first major study into the ecology and biology of the Maugean Skate. He says it occupies a very unusual ecological niche. “It lives in brackish waters, rich in tannins where there is very little else. It is basically a deep-water species living in shallow waters.” Of the 400 skate species identified worldwide, the Maugean Skate is the only one known to inhabit brackish water.

Despite Macquarie Harbour’s remote location, the skate is competing with a growing range of human activities, including expanding aquaculture operations, tourism, and recreational fishing.

The aquaculture sector has been integral to the research project. Adam Main, of the Tasmanian Salmonid Growers Association (TSGA), says it was a priority for the industry to understand more about the Maugean Skate as Atlantic Salmon and Ocean Trout aquaculture began to expand.

“For us, this project has been a fundamental part of our members’ commitment to the community as they have expanded into Macquarie Harbour. We have been gratified to be part of a project that has expanded the knowledge about an endangered species, about which so little was known.”

For Brian Gardiner, president of the West Coast Recreation Association, looking after the skate is an important aspect of what he sees as his own and his members’ stewardship responsibilities, and is crucial to continued recreational fishing in the harbour.

The project has identified the distribution, habitat, reproductive dynamics, feeding habits and population of the Maugean Skate in Macquarie Harbour. It has also assessed the impacts of current and proposed marine farming operations on the population, including the impact of salmonid escapees, and evaluated strategies to reduce risks of bycatch and incidental mortality of the Maugean Skate due to gillnetting.

A previous FRDC-funded IMAS project, completed in 2014 and also headed by Jeremy Lyle, looked at the effect of gillnetting on different species. At that time, the Maugean Skate was found to be caught regularly in gillnets set at depths of between five and 15 metres. Although most Maugean Skate captured were in excellent condition and lively when released, a small proportion of those captured in overnight deployments were in poor condition or had died. 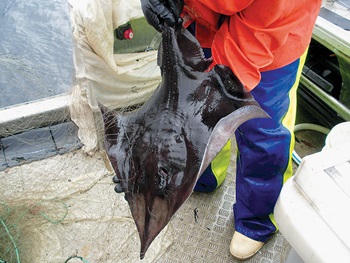 Almost 60 Maugean Skate were acoustically tagged at multiple locations. The tags emit a unique signal that is detected when the tagged skate move to within about 400 metres of an acoustic receiver. Using this technology, the behaviour of individual Maugean Skate was monitored over 12 months.

Research fishing was also conducted over 15 months to assess reproductive status and diet before releasing skate back into the water. Blood hormone levels and ultrasound examinations were used to determine reproductive condition, while stomach pumping was used to investigate diet. All skate were microchipped before being released. Population sizes were estimated using tag recapture rates.
During the monitoring, the tagged skate were detected at depths of six to 12 metres, 85 per cent of the time, and occasionally at depths greater than 55 metres.

The project concluded that Maugean Skate prefer depths with less variable salinity, temperature and oxygen content. This knowledge has been a key driver for changes to reduce the capture of skate in gillnets.

Jeremy Lyle says it was the Macquarie Harbour locals – particularly the Western Coast Recreation Association – who came up with a workable solution that was implemented over other proposals. These changes include the closure to gillnetting of most waters in the harbour deeper than five metres, and the closure of the Table Head/Liberty Point region.

He says the Table Head/Liberty Point closure is particularly significant as this area contains the highest abundance of Maugean Skate and has traditionally been a popular area for recreational gillnetters.

Brian Gardiner says this solution came out of a desire to protect the skate, in conjunction with maintaining what he sees as the valuable cultural tradition in the area.

The project also found that direct interactions between Maugean Skate and aquaculture operations was limited, as most aquaculture leases were located in deep waters outside of the preferred depth range for the species. It was also unlikely that escapees from aquaculture operations would affect the skate, as more than half of escapees die within two months of escaping their pens, 25 per cent are captured in recreational gillnets, and 20 per cent leave the harbour.

The project estimated the population of the Maugean Skate to be around 3200 individuals, although this may be an underestimate. Within their preferred habitat (predominantly five to 15 metres) they probably also have one of the smallest distributions of any elasmobranch (shark, skate or ray).

Overall, Maugean Skate spent 85 per cent of their time at depths of six to 12 metres, although they were occasionally detected from 0.6 metres to more than 55 metres. This indicates that they are not restricted to their preferred depth range.

Maugean Skate were found widely distributed throughout Macquarie Harbour and displayed a high degree of site fidelity, with home ranges generally less than 10 kilometres square. Many skate showed an affinity for the Liberty Point/Table Head region, in the central, south-western side of the harbour.

While some skate left their core range for brief periods (days to weeks), almost all returned. There was no evidence to suggest long-term movement of skate out of the estuary. This means that Macquarie Harbour’s Maugean Skate are likely to be a distinct population.

Maugean Skate were more active at night and moved into shallower water, which probably represents nocturnal foraging. Their diet was dominated by crabs and shrimp. While there was no evidence of feeding on aquaculture pellets, this cannot be ruled out due to their small home ranges and the fact that sampling was conducted some distance away from the farm lease sites.

Preliminary estimates of age suggest the species is relatively short-lived. The maximum age observed was 11 years, but they may live to about 15 years. Maximum age (and size) is a useful proxy for productivity and suggests that Maugean Skate are probably relatively productive.