Listening to the fish song 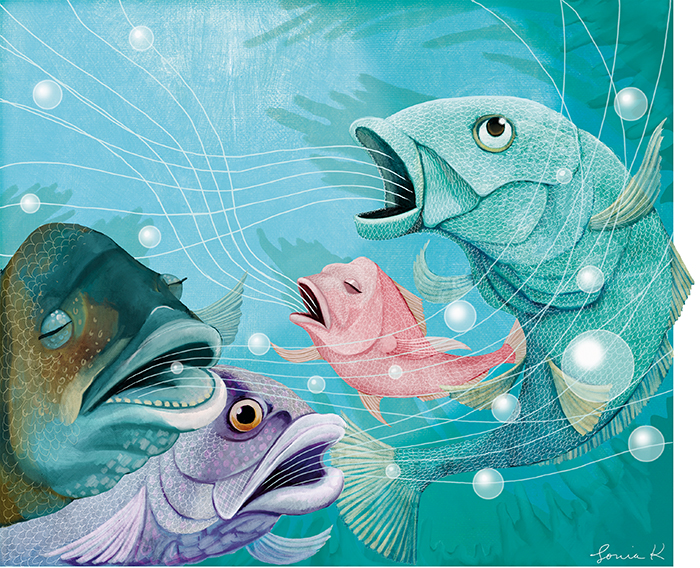 By Bianca Nogrady
We think of the underwater world as a largely silent one, where vast tracts of still blue are only occasionally punctuated by the bass glissando of whale song or the playful squeaks of dolphins, and the shoreline with only the soundtrack of a steady, rhythmic pulse of waves on rock.

But far from being a silent herd, fish have voices and they are not afraid to use them. Marine environments are awash with creature communications, from predators seeking prey, ‘wannabe parents’ seeking partners and property owners protecting their own. Some of these vocalisations would go largely unnoticed by human intruders, lost to the backdrop of reef noise, while some are so loud that divers in close proximity report them to be painful.

Sound is extremely important for underwater creatures, says Miles Parsons,from the Centre for Marine Science and Technology (CMST) at Curtin University. “You’re talking about fauna that are in a medium where their primary method of communication is through sound, because light doesn’t travel particularly far in water,” he says.

The emerging fields of bioacoustics and fisheries acoustics take advantage of this. These explore the use by fish and other marine creatures of vocalisations, using passive acoustics or active acoustics (artificial noise such as sonar).  “Active acoustics are where you’re sending out an acoustic signal and looking at the return that comes back,” Miles Parsons says.

“Passive acoustics are where you’re just listening for a signal, which from our perspective is listening to the noise that’s produced either by an animal – whether it’s a fish or a whale or dolphin – or anthropogenic noise such as seismic surveys.”Fish vocalisations are a particular area of interest because of what they can reveal about fish movements, behaviour, populations and the impact of human noise. Not all fish are vocal, but many species use sound – including several commercially significant fish species – and they produce it in a fascinating diversity of ways.

The two most common methods of producing sound are stridulation – which involves rubbing bony body parts, such as teeth, together – or by vibrating the swim bladder and using muscles around the bladder to vary the rate of those vibrations. Some fish have more control over the sound they produce than others.

The vibrating method is used by the Mulloway (Argyrosomus japonicus). Male fish are equipped with special muscles that effectively allow them to strum the swim bladder, producing sounds described by researchers as series of short grunts (“bup”), long grunts (“baaarp”) or short calls (“thup”). The males gather and chorus in a spawning ground, with the goal of seducing lots of females into the area.

Not only does the swim bladder muscle enable a diversity of sounds, but it also produces incredible volume. Miles Parsons and colleagues have been studying a population of Mulloway in the Swan River in Perth for many years. When they first looked at the source levels of the Mulloway vocalisations, they were shocked at the volume.

“But when you talk to divers, if they’re within a metre or so of a large Mulloway and it’s producing sound, it’s actually quite painful, which verifies that this is the kind of level you’re looking for.”

While the mechanisms of fish vocalisations are interesting in themselves, the noises provide a useful method for studying fish populations, such as the Mulloway found in the Swan River. In a study funded by the FRDC, researchers from Curtin University took underwater sound recordings from a region of the Swan River using hydrophones, noise recorders and data loggers placed at various levels from the surface to the river bed.

These, along with similar monitoring at sites along the Western Australian coastline, collected in excess of 1.84 terabytes of recorded data, representing 9015 hours of recordings. It is a wealth of data that the researchers are still mining, but it is already revealing new information about the habits of the Swan River’s Mulloway.

“The sound levels you have can relate to the number of calling fish that are in the water at the time, so that gives you an index of how many fish are there,” Miles Parsons says. But it is not quite as straightforward as it sounds.

“With Mulloway, you need to know whether or not it’s the males or the females that are producing sound,” he says. “If it’s just the males, that becomes easy if you know what their rough ratio of males to females is. But you also have to know whether all the males call or is it just the adults or over a certain spawning mass.”

Their analysis revealed different chorus characteristics at different sites. It also showed that peaks in chorusing activity related to tide levels, giving some insights into Mulloway spawning behaviour. The lunar cycles and seasons also influenced their vocalisation patterns. The survey also found that while one particular region had the highest numbers of chorusing Mulloway, this spawning aggregation moved around quite a bit, suggesting that attempts to assess the size of Mulloway populations would need to rely on more than one site.

“It starts to give you an index of the relative number of fish that are around in the area and when you look at that over time you can then start to compare whether or not one season has more fish in an area than another.” Delineating spawning areas for fish, particularly commercially significant species, and understanding when those spawning areas are in use is important for ensuring these areas are protected during key spawning times. Miles Parsons says this technique of passive acoustics – monitoring fish vocalisations and doing surveys – is already being used in several places for just this purpose.

The project was also able to look at how human noises affected the Mulloway. “The boats go past them and completely mask all of their sound, but that didn’t stop them from calling,” Miles Parsons says. “They still sit there and call, but it might be that it affects whether or not the female can hear it.”

The study also used fixed recordings at points along the coastline to look for evidence of vocalisations from other significant fish species, such as the West Australian Dhufish (Glaucosoma hebraicum), Snapper (Pagrus auratus) – the FRDC’s Fish Names Committee has highlighted this will change in the future to Chrysophrys – and Black Bream (Acanthopagrus butcheri). But in the case of the Snapper and Bream, the fish were keeping silent, or vocalisation just was not their style. West Australian Dhufish do produce sound, but are a lot quieter than the Mulloway.

Fish are not the only marine creatures contributing to the soundscape of the marine environment. Reefs are surprisingly noisy places, and the nature and volume of this noise can give some indication about the health of a reef; a loud reef may signal more recruitment than a quiet reef, Miles Parsons says. This is a very recent area of research and understanding the relationship between the habitat and its (potential) residents is only just beginning. Technology is a key element in passive acoustics.

“You used to only be able to go out and take these few minutes of recordings every now and again, but over the past 20 years or so, CMST and other research groups have been developing long-term recorders,” he says. “So we’ve had these systems that have been able to record for six months to a year on a schedule of a few minutes every 15 minutes for over a decade. We’re really only now able to look at changes on a ‘long-term’ scale.”

This is enabling the analysis of soundscapes of coral reef environments to create a catalogue of fish calls, which can then be used to monitor how the health of the reef responds to changing environmental factors. Miles Parsons says he would also love to set up long-term recordings along the Swan River to monitor the movement of these spawning aggregations over greater distances.

Man-made noise has long been recognised as a pollutant in the marine environment but, until recently, research into its effects on wildlife focused largely on mammals, says fish biologist Mark Meekan, principal research scientist at the Australian Institute of Marine Science (AIMS) in Perth.

As the oceans become noisier, the need to understand how this change is affecting other marine creatures has become clear. Mark Meekan has been studying how passing boat noise affects reef fish during a critical period in their lives, when the young damselfish are emerging from the plankton and settling on the reef.

“Those small fish are very vulnerable, a lot of them get eaten and they’re at a time when they really need their wits about them to learn what a predator looks like and what’s going on in the reef environment,” Mark Meekan says. Unfortunately, introducing noise such as that of two-stroke outboard motors makes things much riskier for these young fish.The AIMS research suggests that being exposed to man-made noise substantially reduces the young fish’s performance in the face of predators: put simply, they are more likely to be eaten.

"What we found is that predators were far more successful at eating these little guys in the presence of noise and we think that had to do with the fact that the fish were slower to initiate an escape response, they let the predator closer to them and this essentially tipped the scale towards the predator’s favour,” Mark Meekan says.

Interestingly, the noise of the motorboats did not seem to distract predators in the same way that it distracted their prey. If both were equally distracted, it would lessen the problem considerably but the imbalance in the impact can disturb the ecosystem.

While damselfish serve as a good model species for reef fish, Mark Meekan says there is a need to expand this research to other fish and marine species. The results could help shape interventions to reduce the impact of noise on sensitive coral reef ecosystems.

These interventions could be as simple as using four-stroke instead of two-stroke engines, as they run much more quietly.

“It’s really about finding out what the effects are and trying to do something about them that is practical and simple and a sensible way that benefits everyone.”