Seafood festivals provide an opportunity to connect with the community and help the seafood sector tell its story, from the source to the final dishes served 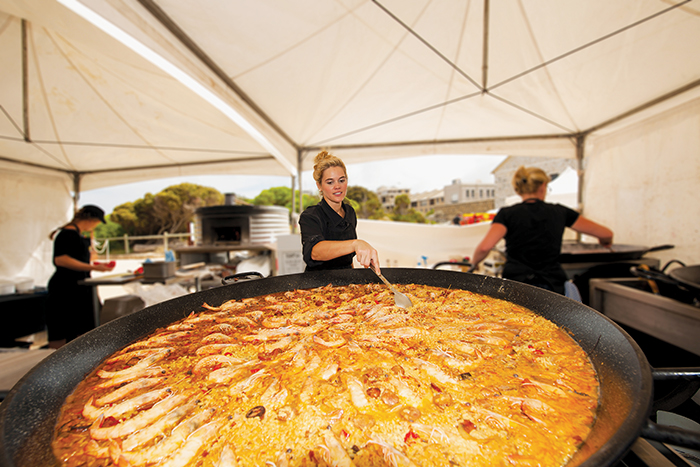 Some 20,000 seafood aficionados flocked to the Fremantle Seafood Festival in late February to celebrate Western Australia’s large and diverse seafood sector. The festival, which organisers hope to establish as a permanent fixture on Fremantle’s events calendar, has a twofold aim: seafood education and industry promotion.

“Explaining how the industry is managed, how it is sustainable and meets global Marine Stewardship Council certification, is a big part of the festival,” says 2016 festival director Peter Woods. “It gives people a greater appreciation of the size and diversity of our industry.”

Part of the festival’s goal of raising community and consumer awareness of these unique bioregions was a Fisherman’s Table Seafood Feast. Diners joined seafood chefs Josh Catalano and Peter Manifis, watching them prepare fish from the regions and then experiencing the different tastes and cooking styles. The four bioregions cover a vast area of deep-sea, coastal and estuarine habitats and species, and consequently provide a mouth-watering smorgasbord of seafoods. 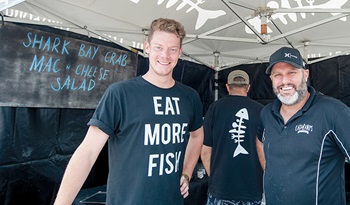 The Western Australian Fishing Industry Council (WAFIC) is a major sponsor of the festival. WAFIC’s CEO John Harrison says the event is a great opportunity to talk with people who are keen to learn more about WA fisheries, which are among the best-managed and most sustainable in the world.

“The seafood tastings cooked by celebrity chef Peter Manifis and his team from our booth throughout the festival were hugely popular, exposing participants to the fantastic quality and taste of some of the ‘unsung heroes’ or more unknown species of the WA fishing industry,” John Harrison says.

The many tasting stalls representing Perth and Fremantle seafood restaurants were complemented by a popular cooking masterclass run by Melbourne seafood chef Bart Beek.He ran eight booked-out classes over the two days. The classes took participants through the hands-on preparation of spiced crispy-skin Cone Bay Barramundi and accompanying condiments, including an avocado foam and a soy glaze (see recipe). Bart Beek, who trained at the famed Le Cordon Bleu in Paris, runs the award-winning Essence Food Studio in Melbourne.

Even for him the festival broke new ground in seafood education: “When Peter Woods first raised the masterclass idea I was thinking of five or six people … we ended up with 160.”

He concentrated on a single dish using a locally supplied fish, Barramundi, and 10 cooking stations equipped with portable induction cooktops.

“Because of the instantaneous control you have over the heat these are ideal for fish for which you want a nice crispy skin without overcooking the fillet.” Bart Beek is a passionate educator and responds enthusiastically to the questions people raise about cooking seafood. “A lot of people say they can cook steak but not fish because they are worried they will undercook it. So they treat it like steak and overcook it."

“So I explain the ‘heatwave’ factor. Heat one side hard for a few minutes (for a thick fillet such as Atlantic Salmon) and that heat will radiate through. You then only need to lightly cook the other side, whereas a lot of people will cook both sides the same.” 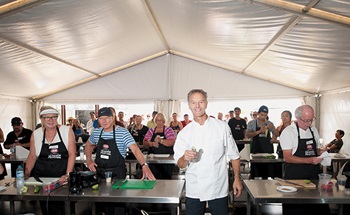 He says two of the most frequent questions relate to cooking scallops and calamari. “For scallops I put 12 in a hot pan, placing them like the hour marks on a clock face as I work my way around the pan. When I get to 12 I start turning them over. By the time I am back to 12, they are done. It’s that quick.”

For calamari rings he scores a crosshatch pattern on the inside, three millimetres deep and five millimetres apart, then places them between two wire cake racks. “The racks are placed onto a hot chargrill for 90 seconds and turned for another 90 seconds. That’s it. You cook quickly with intense heat.”

Bart Beek has been cooking since he was a young boy, helping his mum in the kitchen, but says even though he grew up in Port MacDonnell, South Australia, he did not begin appreciating seafood, especially Australian seafood, until he was a professional chef.

“There are more than 2000 species of edible seafood in Australian waters. Compared with anywhere else in the world that is an extraordinary resource.” Teaching Australian consumers about this resource and how to appreciate it in the kitchen has become his life’s work.

Peter Woods says it is clear from the enthusiasm of visitors to the Fremantle Seafood Festival, including big crowds who turned up to simply watch the masterclasses, that people are interested in seafood: “They want to know it is a sustainable industry and they want to know how best to cook the fish.”

This year was the festival’s second year, with plans underway already for an expanded program in 2017, including masterclasses extending to other fish species such as squid and prawns.

Located within the iconic Fremantle Fishing Boat Harbour, the festival had its origins more than a decade ago as an add-on to the Blessing of the Fleet – an annual event initiated in 1948 by Italian migrants. Many had emigrated to Fremantle after World War II from Molfetta near the heel of Italy, and Capo d’Orlando in Sicily, bringing this ancient European Catholic tradition to their new home fronting the Indian Ocean.

The WA industry has changed considerably since those days, but it has never lost its community presence. The Fremantle Seafood Festival, following a brief incarnation as the Sardine Festival, continues that tradition of bonding people with the industry, its customs and most importantly, its wonderful catch.

Crabs to the fore at Mandurah 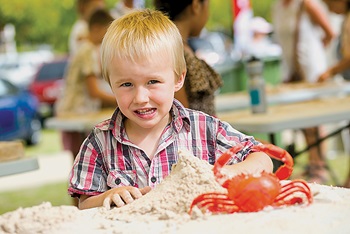 This year’s event on the weekend of 19 and 20 March was the 18th annual festival, which attracted more than 100,000 people. The festival is sponsored by Channel 7 and it has proved to be a popular day trip for visitors from Perth, offering a broad program of activities including water sports, live music and, of course, seafood.

President of the Mandurah Licensed Fishermen’s Association (MLFA), Damien Bell, has been involved in the festival for more than a decade. He says events such as this provide fishers with an opportunity to engage with the community and reach new markets, although they will only get out of it what they put in. For some fishers it might be enough to sell their product; others may want a larger role that promotes their fishery and fishing as well as their seafood.

For many years, MLFA ran its own stall at the Mandurah festival to build the profile of the Peel-Harvey Estuarine Fishery and the local product.

In addition to the traditional Blue Swimmer Crab the region is famous for, known locally as “blue mannas”, MLFA also trialled local Sea Mullet with festival-goers – a species that was in the past considered a bait fish. Served in tempura batter and fried by staff from the local award-winning restaurant Redmanna Waterfront Restaurant, Damien Bell says the response from those who tried it was very positive.

In recent years, local fishers have not had their own stall; the WA Department of Fisheries has instead operated a booth to promote sustainable management and field questions about the fishery. This year the Marine Stewardship Council (MSC) also attended to promote sustainability certification, which is underway for the Peel-Harvey Estuarine Fishery.

By the time of the 2017 Mandurah Crab Fest, Damien Bell says the Peel-Harvey Estuary should have received its MSC sustainability certification, and he expected local fishers would again take a stand in order to promote the achievement. But for the past two years, he has attended the festival in an unofficial role and provided feedback to the festival organisers.

He says the event has become so big that there is no way local fishers can supply all the crabs required. However, it is essential that the quality of seafood – and the way it is prepared – is maintained. Otherwise it could do more harm than good and turn people off the seafood the event is trying to promote.

The importance of the local fishery is such a well-recognised and integral part of the Mandurah community that the festival also promotes the South West Catchments Council’s ongoing ‘Home River Ocean’ water-quality program. Its ‘Save the Crabs, Then Eat Them’ campaign focuses on reducing nutrient run-off from garden fertilisers into the Peel-Harvey Estuary, in order to protect crab populations for future harvest. 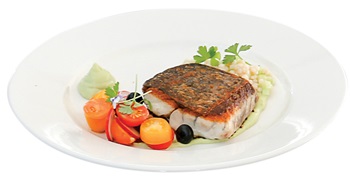 Stir continuously while on the heat for five minutes or until fragrant.

Remove to a mortar and pestle.

Grind until fine, then add in the remaining ingredients.

When cool, place into an airtight container and store until required.

Preheat a heavy-based non-stick frypan for two minutes on ‘sear’ level using an induction cooker and add in the olive oil.

Season the fish and place skin-side down and hold down for 1.5 minutes using a palette knife to maintain total contact of the skin onto the pan’s surface.

Allow to cook for nine minutes, until the skin turns golden and crisp.

Turn over and cook the other side for three minutes, until just cooked.

Place the bottom side onto a plate sprinkled with salt flakes and the spice mix.

Place all the ingredients into a blender and process until combined.

Transfer to a container.

This beautiful summer dish is presented dusted with a spice mix, served on avocado with a touch of soy sesame glaze. Bart Beek suggests it be accompanied by a lemon couscous and tomato
summer salad, scented with nasturtiums and a sherry walnut vinaigrette.

For a full calendar of seafood events visit:
FishFiles