By Gio Braidotti
More than 90 per cent of Australia’s rock lobsters are exported to China and as one of Australia’s leading suppliers, the Geraldton Fishermen’s Co-operative (GFC) has developed a broad strategy to strengthen its position in this important market.

GFC represents about 60 per cent of processed Western Rock Lobster (Panulirus cygnus), which is Australia’s most valuable single-species fishery, with an export value of more than $320 million a year and an annual catch of about 6000 tonnes.

With the China–Australia Free Trade Agreement now signed and significant tariff reduction coming into effect for rock lobsters and other species, there are compelling reasons not only to ensure chain of custody but also to build a strong brand recognition for Australian product in China.

GFC’s general manager of marketing and business development Matt Rutter says the co-operative’s members, who are all fishers or licence holders, expect the business to explore opportunities to further develop the China market. They also want to leverage scale in order to maximise returns and reduce risk related to the current trade routes.

In order to do this, GFC has secured a bonded warehouse for seafood storage at Baiyun Airport, Guangzhou, which opened on 8 January 2016 and is now receiving product. 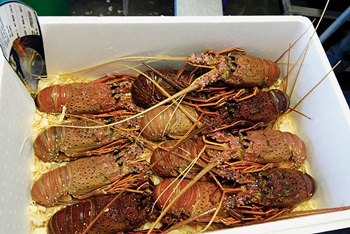 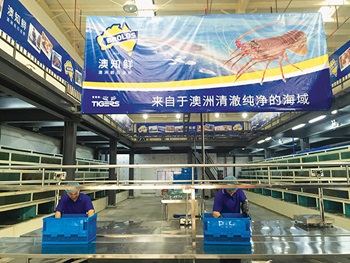 We believe these relatively modest strategic investments position our company at the forefront of the rapidly evolving China market,” he says.

“GFC is both confident in, and committed to, the longevity and sustainability of the Western Rock Lobster Fishery. That confidence underpins our marketing strategy. Fishery research and management, including by the FRDC, have contributed to that process.”

Sustainability of the fishery is closely monitored and managed by the Western Australian Department of Fisheries and it has also been continuously certified as sustainable by the Marine Stewardship Council since 2000, when it was the first fishery to achieve this certification.

Eventually, GFC will be able to ship live product from its new Welshpool facility in Perth directly into Baiyun Airport, landing in pristine condition, ready for sale and distribution anywhere in China. The critical time spent out of water will be less than half that of the current route into China. Baiyun Airport is within four hours’ flying time of every city in China.

At its new secure bonded warehouse at Guangzhou, GFC can hold live and frozen product under bond, pre-duty and pre-customs clearance, for storage and distribution within China or for trans-shipment to another country. Duties are only payable once the product is moved out of bond for distribution or sale within China.

In support of this facility, GFC has registereda foreign-invested commercial enterprise (FICE) in Guangzhou and rented an office.

A FICE is a limited liability entity that does not require the involvement of a Chinese investor or partner. It will enable GFC to trade (buy and sell) within China. Setting up a FICE requires the establishment of a physical office in China.

“The office may in future be staffed for the purposes of conducting market research, identifying new market opportunities, providing a higher level of service and relationship management for existing and new clients, and monitoring our warehousing, sales and distribution activities on the ground.”

GFC intends to hold live and frozen product in the warehouse and is working with Tigers China, a global logistics and transportation company based in Hong Kong.

The bonded warehouse’s main features include:

The decision to invest in a China-based facility allows GFC to access additional airspace in order to service existing clients better during peak demand periods. Another benefit is the ability to develop an alternative trade route as insurance against potential border closures and a base from which to explore the market and new trade opportunities.

Guangzhou was selected because it is China’s traditional distribution point for perishable goods. It is China’s third largest city and home to nearly 30 million people.