An artist’s impression of what a seasteading community might look like, part of a vision to make greater use of the world’s marine resources.
Image: DeltaSync/seasteading

Artificial reefs for recreational fishing have been making a splash around Australia for many years, but new research is investigating the potential for man-made offshore reefs to increase the commercial productivity of Tasmania’s fisheries. The prime candidates for this new real estate are high-value fisheries species such as rock lobsters and abalone.

Leading the research for the Institute for Marine and Antarctic Studies (IMAS) at the University of Tasmania is Stewart Frusher, who says that, globally, offshore aquaculture is still in its infancy.

While Europe and northern America focus on fish species such as salmon and seabass, he believes Australia has an opportunity to become a frontrunner in innovative offshore marine production systems focused on high-value and sustainable reef species.

“Tasmania already has a considerable ‘first-mover’ advantage,” he says. “The University of Tasmania is the only institution globally that can reliably culture juvenile lobsters to pilot-scale numbers. And Australia already has an international reputation for high-quality export seafood, especially in rock lobster and abalone. This is an opportunity to build on that reputation.”

Demographic projections indicate the world’s population will increase to nine billion by 2050. While this will require a 30 per cent increase in food production overall, key seafood markets for Australia are expected to be found among the increasing number of wealthy consumers in South-East Asia who will be better able to afford higher-quality food.

However, environmental impacts on the natural production systems for Southern Rock Lobster and abalone have resulted in declines in catches in recent years, Stewart Frusher says. Artificial reefs, stocked by cultured animals, offer an alternative system that is less affected by environmental impacts and can increase Australia’s export supply of these valuable species.

In February 2015 two artificial reefs were deployed in Tasmania’s River Derwent as a first-stage proof-of-concept. After 10 months of ‘conditioning’ allowing algae and other marine organisms to accumulate on the reefs, a pilot project to seed the reef with juvenile Southern Rock Lobsters was undertaken in December 2015.

The rock lobsters were aged between 12 and 24 months and had been tagged. They were collected as part of a previous project investigating the triggers for puerulus (late-larval stage) settlement, and then raised at IMAS pending their return to the water as part of the reef trial.

The artificial reefs were designed and built by Southern Blue Reef, based in Victoria, which is also funding the trial. Almost three years in the making, the concrete construction has a footprint of seven square metres on the ocean floor, a total surface area of 110 square metres and weighs 17 tonnes.

There are two designs. One is four storeys high with a basic cantilever design and is the cheapest possible construction option. The second reef, also with four storeys, incorporates a series of different-sized chambers and entrances.

“This first project will look at whether the rock lobsters will stay on the artificial reefs, and secondly whether there is a preference for either reef, or any particular part of the reefs. For instance, the reefs are about 2.3 metres high, and it could be that the rock lobsters prefer the lower levels.”

The rock lobster population on the artificial reefs will be assessed in May 2016. “We’ll decide then whether to remove the rock lobsters or continue monitoring,” Stewart Frusher says.

Executive director of Southern Blue Reef Greg Page says the project is a labour of love for him, underpinned by his belief that engineering can help oceans to provide more food. “Reefs are the most productive part of the ocean and our aim is to help the oceans become more productive by creating additional reef habitat,” he says. “Ideally, production from the reefs would help to pay for their construction.”

Australia’s marine domain covers more territory than its terrestrial domain, and is the third-largest exclusive economic zone (EEZ) in the world. However, fisheries production in Australia is relatively low, at less than three kilograms per kilometre of coastline, or just over 0.07 kilograms per square kilometre of continental shelf.

“Given the size of the Australian EEZ, if only a minor part of it could be realised for seafood production, Australia could shift from a minor to major seafood-producing country with the largest market on our doorstep,” Stewart Frusher says. 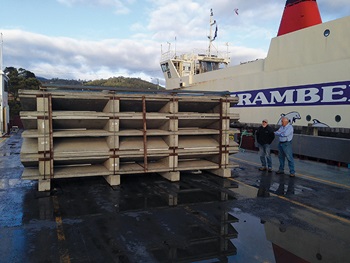 The ‘basic’ model designed by Southern Blue Reef, before installation at the Derwent River research site. 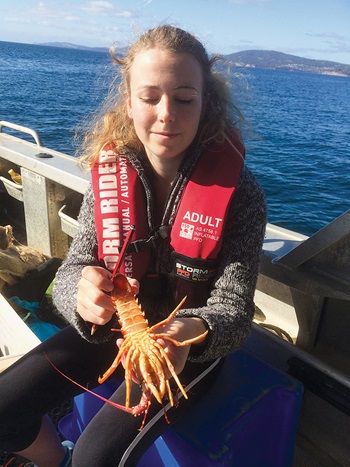 A researcher tags a Southern Rock Lobster prior to release onto the new artificial reefs being trialled in Tasmania.
Photos: IMAS

For Stewart Frusher, the long-term vision involves offshore “floating-reefs” for marine production, in conjunction with renewable energy systems that also use the offshore environment.

Several countries in Asia (Japan, South Korea and China) have established commercial production from artificial reefs in inshore coastal regions. However, coastal regions in Australia are already subject to competition for a diverse range of uses and suffer from the effects of human interactions, including urban development and pollution.

“Tasmania is located away from extreme events, such as cyclones and hurricanes, and the Tasman Sea, between Australian and New Zealand, is relatively protected,” he says. “It is also at the confluence of warm nutrient-poor waters from the East Australian Current and the cool nutrient-rich waters of the Southern Ocean.”

Lower trophic-level species, such as rock lobster and abalone, would also be less reliant than other species on supplementary feeds, such as fishmeal, and could be integrated as part of a multi-trophic system that includes mussels and seaweeds.

Productive offshore reefs would require a permanent human presence to maintain facilities, provide appropriate animal husbandry and to continue R&D. This links to ideas being mooted internationally including “seasteading” and rigs to reef proposals. Seasteading is an international movement that involves the creation of floating cities, while the rigs-to-reef concept has been developed by researchers at the University of Technology Sydney to redevelop decommissioned oil rigs as new benthic habitat.

“The multisector approach, including marine production, biodiversity conservation, marine tourism and renewable energy, provides a more holistic approach that could transform the way we use our marine domain into the future.”

He admits it may all seem a bit futuristic, but discussions are already underway with a group of researchers at the Australian Maritime College who are investigating wave and swell energy.
“The college also works with the providers of offshore platforms for the oil and gas industry, and we hope to bring those people together.

“We see this as a series of proof-of-concept projects that will lead to the development of off-shore reefs, and we’ve already taken the first steps.”