To market, to market 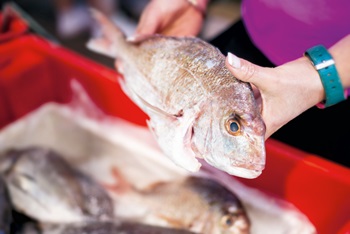 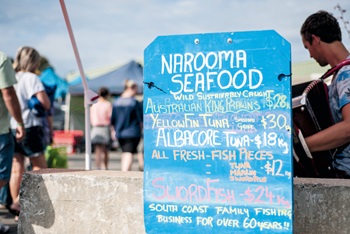 Dealing directly with the public is one of the main reasons that Hayley Abbott loves attending farmers’ markets in Moruya, New South Wales, and Canberra to sell the catch from her family’s fishing business, Narooma Seafood Direct.

It is a business that dates back to 1949, when Desmond Creighton first started fishing on the NSW south coast. He is now nearly 90 years old and still involved in the business, but it is his daughter and son-in-law, Vicki and John Abbott, and their children, Hayley, Todd and Ryan, who run the business today.

Depending on the weather, they fish several times a week and sell their catch to wholesalers in Sydney and Melbourne, as well as exporting to Japan and the US via agents. They also attend three farmers’ markets every week, which Hayley Abbott says are an important part of the marketing mix and help to keep their boats in the water.

They own two boats, a pelagic longliner and a smaller fishing boat they use when fishing with hand lines. “Dad and the boys run the boats while Mum and I take care of cutting and selling the fish,” she says. “We work seven days a week and long hours, but the returns are much better than selling all our catch to wholesalers.”

Despite the family tradition, Hayley Abbott had not planned on a fishing future; she travelled to the US to study sports management and business administration. However, not long after returning home she found herself with a filleting knife in her hand and then helping to run the farmers’ market stalls with her mum. She has been doing it for two years now and loves it.

The Abbotts aim to bring in catch by Monday lunchtime so they can prepare the fish for the Moruya market on Tuesday. For the two Canberra markets on Saturday and Sunday the boats return by Thursday lunchtime.

The weekend markets involve packing six pallets of fresh fish into a refrigerated truck and an overnight stay in Canberra. What they do not sell is frozen, smoked or made into fish cakes to be sold at the next market. 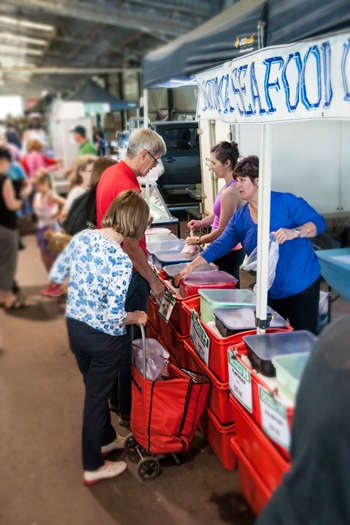 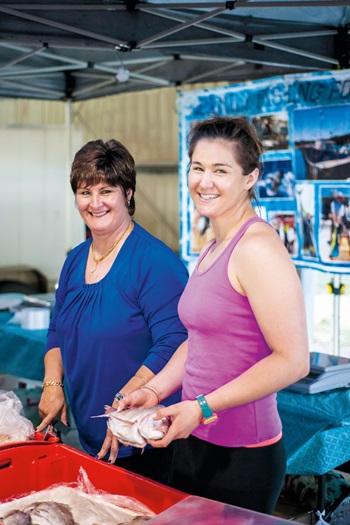 Hayley Abbott says the relationship with the customers is a source of real satisfaction and it helps to keep her motivated. “It’s very rewarding when customers say things like ‘My family never ate fish, but they now eat your fish’.”

It is not all compliments and smiles though. The Abbotts’ catch includes Southern Bluefin Tuna (SBT). While SBT populations are now recovering, many members of the public know it as an overfished species. The Abbotts explain to customers how the stock is now being sustainably managed and catches are within the limits set by the fishery managers to allow the SBT population to recover from past depletion.

Hayley Abbott says longlines also have a bad reputation with the public but, once again, she takes the chance to explain the advantages of this catching method. “Most people are very interested to hear the facts and learn more about fishing practices and regulations. It’s a good opportunity to educate the public,” she says.

Personal interaction with customers has also provided a boost for another NSW fisher, known simply as Aaron, who tested a fortnightly farmers’ market at New Brighton, NSW, for several months.

Hayley Egan, a research officer from Southern Cross University, assisted Aaron at the markets as a friend. She says while well-known fish such as Snapper and Flathead made it easy to attract customers, it was not so easy when the week’s catch included mostly lesser-known species such as Leatherjacket.

But she says the interaction with the public was particularly rewarding for Aaron, who received praise for his product and plenty of questions about how to prepare it. “At first he didn’t know how to take these compliments,” she says. “But as he got more comfortable he admitted that talking directly to customers really improved his pride in his work.”

As part of their marketing they developed information stickers used in the fish packaging that included contact details for the fisher along with information about the origin of the fish. The stickers proved a hit with customers.

Hayley Egan says although the variability of supply for the high-demand fish ultimately meant the markets were not viable for Aaron, the effort did win him a host of regular customers who are just as happy to buy fish fresh off his boat at Brunswick Heads as they were to buy at the market.

As a long-time market stallholder, Tracy Hill, co-owner of Coorong Wild Seafood in South Australia, has refined her sales strategy and is maintaining strong links with customers while diversifying into education and tourism.

For 15 years, Tracy Hill and her family sold their catch at various farmers’ markets in their region, but found that travelling time and the expectation of cheap products really cut into their earnings. The logistics of selling a product that needed refrigeration complicated matters further and added to the cost.

“Over the past couple of years we’ve had more and more people contacting us about selling direct at our door,” she says. “But this was not time-effective either, unless we got big orders. When people do come here they want to chat, which can be hard if you are trying to get all your fish processed for the day. We needed to cover the cost of our time.”

To do that they started offering tours of their facility featuring filleting demonstrations and tastings. They also offer seafood lunches for groups, which allows them to charge more.

Currently they average about one group visit each month, mainly through word-of-mouth promotion. But they are considering an expansion of their premises to include a room for presentations, a commercial kitchen for cooking classes and refrigerated displays to sell their own and other local products.

“Our ‘cellar door’ will be a sustainable seafood centre, also partnering with other producers to include other varieties of seafood and different products such as olive oil, sauces and seasonings. We will be promoting the region as well as our business,” Tracy Hill says. She has approached the local council’s tourism officer, as well as Regional Development Australia, seeking a grant to turn this vision into a reality.

In larger urban centres such as Melbourne and Sydney, buying direct from a local fisher and understanding their fishing techniques and the sustainability of their catch can be a greater challenge. In Sydney, Jules Crocker of Joto Fresh Fish in Banksmeadow is helping to bridge this gap for his customers.

He has been selling fish to restaurants for 17 years and now runs his own Saturday fish market where he retails fish from all over Australia and New Zealand, with an eye to top quality and sustainability.

Although not a direct seller, Jules Crocker offers a unique service to his customers, who can be sure all his product has sustainability credentials, is high quality and affordably priced. Many of the fishers he buys from also sell to major supermarket chains, but it is the way he handles and markets the fish at Joto that makes the difference.

Jules Crocker makes sure he only sells product that has been independently assessed to be sustainable, for example by the Marine Stewardship Council. If a particular species does not hold an accreditation, it is checked against the FRDC’s Status of Key Australian Fish Stocks to ensure it is rated green on that scale.

“We don’t have a wide range of fish every day, we only sell what’s in season and fresh at that time.” he says. “For most of our customers the superior quality of our product is the main drawcard, with its sustainability being a nice bonus.”