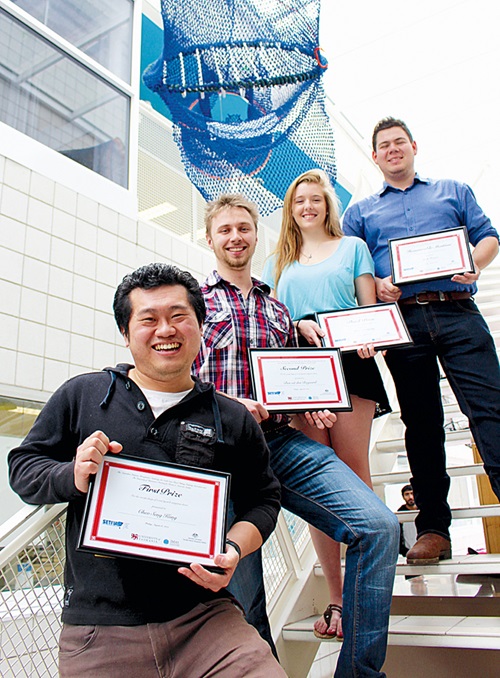 It was a light-bulb moment for Tommy Cheo as he debated the best way to power his proposed seal deterrent, the Nagging Siren: why not let the waves do the work?

It is a concept that has won the favour of judges for this year’s Seal Thing competition at the Institute for Marine and Antarctic Studies (IMAS), a contest for innovative thinking to reduce the interactions between fishing vessels and seals.

Already familiar with the use of sound to deter marine mammals from the trawler nets, Tommy Cheo says he was inspired by hand-cranked fire sirens when it came to finding a power source for his winning Nagging Siren design.

“Electricity and water are not a good combination, and then I realised I could make the waves crank the siren,” he says.

The Australian Fisheries Management Authority and the South East Trawl Fishing Industry Association (SETFIA) sponsor the competition as part of the Responsible Fishing unit of study offered through the Australian Maritime College at the IMAS campus in Launceston, Tasmania.

So far only a concept, the Nagging Siren is a mechanical device that would be towed behind a boat or attached to fishing gear. When dragged through the water it would emit an irritating noise to deter seals from entering the area of the fishing operations.

Competition judges, which included commercial fishers from SETFIA, said Tommy Cheo’s entry was a simple, easily constructed device that, if developed, would likely see high acceptance among industry due to the ‘set-and-forget’ nature of the design.

Senator Richard Colbeck visited IMAS to announce the winners in August as Parliamentary Secretary to the Minister for Agriculture at the time. “It is great to see such innovation and enthusiasm from students to design ‘real’ solutions for challenges faced by Australia’s trawl fisheries,” he said.

“Innovation is important as we continue to work together with industry and other fishery stakeholders to ensure Australia’s fisheries management practices remain among the very best in the world.”
SETFIA’s CEO Simon Boag says operators in the South East Trawl Fishery have worked with scientists over many years and that the competition helped to support the next generation of researchers.

Second place in the competition went to Ben uit den Bogaard for his entry SealYaLater – a grid of flexible electrodes that carry a small direct current (DC) across the mouth of the net.

The source of the current would be provided by specially designed battery units fitted to the head rope of the trawl. The mild fields of DC would cause an uncomfortable sensation and deter the seals from entering the net.

Judges said this was a novel idea worth investigating and could be further developed and potentially commercialised. The idea of using electric barrier nets had been shown to work in other applications.

Tana McCarthy was awarded third place for the Illuminator, a system of lights and reflectors designed to aid seals to orientate themselves in the net and increase their ability to escape.

Seals voluntarily swim into nets as it is easier for them to catch fish in there, but then may struggle to exit. Illuminated and flashing panels of the net would increase the probability of seals finding their way out of the mouth of the net and also through an escape hatch (the escape hatch is already a proven methodology).

Judges said this system of lights and reflectors to help seals escape the net was novel and could be put into practice, warranting further investigation. If successful, it was likely to have high uptake within industry.

An honourable mention was also awarded to Jack Hauser for his entry Seal Mask, a system of canisters containing chemical irritants and dyes that would be released around the boat and the net. Once released, this cloud of substances is designed to mask the fishing operation, confusing seal senses and deterring them from entering the mouth of the net.

The ingredients used in Seal Mask would be natural products not harmful to seals.

Judges said this was a thoroughly researched entry of a very high standard and was an innovative idea. However, they agreed that the masking effect was likely to work only in a small area immediately around the release point of the irritant, which seals could circumvent. They also suggested it was also possible that seals may become accustomed to the deterrent.