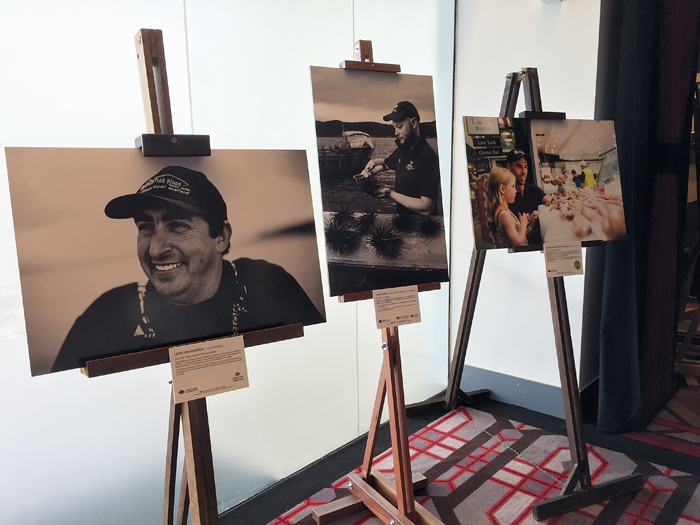 Part of the collection in the ‘United by Pride’ exhibition developed by the 2015 National Seafood Industry Leadership Program participants, on show at the Seafood Directions conference in Perth.
Photo: Catherine Norwood

‘United by pride’ is the theme of the touring photographic exhibition that highlights the human face of fisheries and is an initiative of the 2015 National Seafood Industry Leadership Program (NSILP).

The exhibition was featured as part of the industry’s national conference, Seafood Directions, held in Perth in October, and plans to visit several other Australian cities.

It is one of several initiatives to come from the NSILP participants this year. Others featured point-of-sale information for consumers and a fisheries education and careers strategy.

In 2015 the vision and mission were as follows.

VISION: To celebrate our story of proudly and responsibly harvested Australian seafood.
MISSION: United, we tell the Australian seafood story to increase community awareness of its sustainability, quality and diversity.

Focusing on ‘Pride’, one project group initiated a survey of seafood businesses and individuals, which generated more than 70 profiles that describe what the respondents love about their work. There were also hundreds of photos submitted. 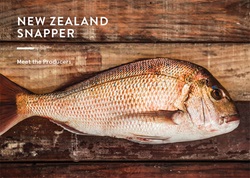 From these submissions, 26 profiles and accompanying photos were selected to create the exhibition, which was supported by the Australian Department of Agriculture.

NSILP participant Julian Harrington says the group was encouraged by the high level of response to the questionnaire it sent out, seeking firsthand stories from members of the Australian seafood sector.

He says the profiles have also been adapted for use in social media, including a smartphone app that is being developed by the Tasmanian Seafood Industry Council (TSIC).

The app is based on a popular Tasmanian Seafood Trail brochure TSIC previously produced and is now looking to move to an electronic format. The app allows travellers to find information about fishers, fisheries and fish-related food outlets based on location, and to be alerted to relevant local information as they travel.

The profile of seafood industry members produced as part of the ‘Pride’ initiative will be incorporated into the app, which also includes details of local commercial and recreational fisheries, Indigenous heritage and reviews of fish shops and restaurants.

A second project group developed point-of-sale promotional material, giving consumers information to connect the fish they have bought with the fishers and fisheries that have provided the catch.

The Spencer Gulf and West Coast Prawn Fisherman’s Association assisted with the design of a postcard featuring its product for retail buyers, and a business card for restaurant diners.

The business card, which featured a QR code and web links to online information, was delivered to diners ordering prawns, either when their meal was delivered to their table or when the meal was paid for. The snapper postcards, funded by Southern Cross Fishing, were trialled for five days through the Sydney Fresh Seafood Group.

Veronica Papacosta says although the initial trials were short, the feedback was overwhelmingly positive. There was also an increase in activity on the web pages listed on the cards, such as the FRDC’s FishFiles, which was attributed directly to the project.

She says that in retail outlets once shoppers had the postcards, they were keen to see more about other species as well. The group plans to expand the trial to other species and provide an analysis of return on investment to determine the value of the promotional material to industry.

The third project group focused on an education initiative to raise the profile of fisheries in the general public. It developed a concept for collectable Australian seafood cards for supermarkets featuring different fish species, and fishing techniques. Discussions are underway with both Coles and Woolworths about the possibility of taking part.

The group also analysed available information about fisheries jobs and careers, identifying a need for a more national approach to establish clearer career pathways and to link relevant jobs in an easily searchable way. It also plans to establish a presence on LinkedIn for the NSILP program.

Although the 2015 NSILP participants officially graduated in September, all of the project groups have developed a plan of action and committed to pursuing their initiatives further in the coming year. This year’s graduates are:

The NSILP program is part of the FRDC’s people development portfolio, with gold sponsorship from Sydney Fish Market.

Expressions of interest for the 2016 National Seafood Industry Leadership Program (NSILP) are now open. It will involve three residential sessions from 19 to 21 April in Darwin, from 26 to 28 July in Sydney and from 1 to 3 November in Canberra, as well as an ongoing project throughout the course of the program.

NSILP is the only national leadership program specifically developed for the seafood industry. It was designed in consultation with people from the seafood industry and with their specific needs in mind. More than 200 people of all ages and representing all industry sectors have graduated from the program, including processors, fishers, extension officers, exporters, importers, marketers, scientists, managers, deckhands, and Indigenous and recreational fishers.

For more information or to apply contact Jill Briggs at Rural Training Initiatives, 0409 455 710.