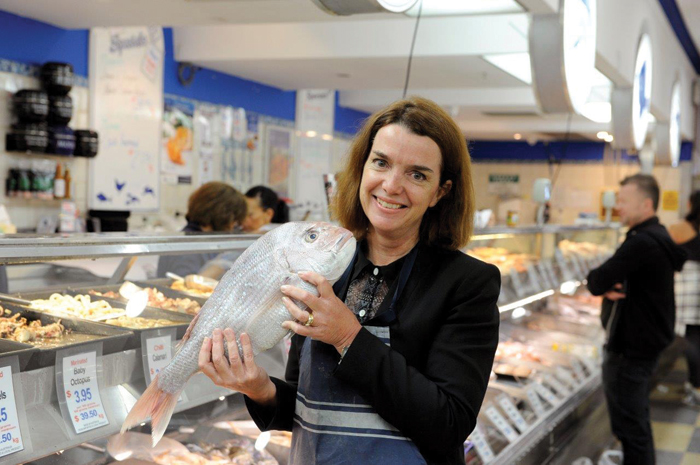 Her first major fisheries-related event as Assistant Minister for Agriculture and Water Resources was the official opening of the  national Seafood Directions conference in Perth in October.

While Senator Ruston does not have a direct background in the industry, she is no stranger to primary industries.

Speaking at the conference, Senator Ruston said that she was, at heart, a country girl, having been born and raised on a horticulture property. “I still own and operate a floriculture business – Ruston Roses – that has all the challenges, and hopefully the rewards, that face us all in the primary industry sector,” she said.

Senator Ruston maintains her electorate office in her home town of Renmark, on the SA end of the Murray River, which allows her to stay in touch with the rural sector. While she does not have as much time these days she said she still likes to occasionally cast a line from a ‘tinnie’ on the river.

However, she noted that “compared to the previous minister, Senator Richard Colbeck, who had a lifelong knowledge of fisheries, I am a bit of a blank canvas. I have an untainted and open mind when it comes to taking Australia’s amazing fishing and aquaculture forward.”

Senator Ruston assured the industry that she would not be an interventionist minister and has no intention of imposing anything that was not required by regulation or legislation. She said she strongly believed governments should only do what the private sector could not, would not and should not do.

“Fundamentally, and in practical application, I believe that industry representatives are the best placed to make decisions about their own industry. I’d like to concentrate on creating the best possible environment in which you can operate – an environment relieved of unnecessary red tape, one that provides easy access to markets and resources, and one that recognises how fantastic our fisheries really are.”

“Let me paint a picture of where I see the industry and how we as a government can assist in facilitating the outcomes you seek for your future. I believe we have a great story to tell all Australians.

“Even in the few short weeks since taking the role, the contribution that the seafood industry provides to the nation has become very evident. The fact that Australia’s seafood sector is forecast to reach a value of $2.9 billion in 2015-16 is case in point.

“What’s more, Australian seafood is a premium product that ranks among the world’s best. But the work and dedication that underpins sustainable Australian fisheries is frankly far less appreciated outside the industry than it should be.”

Senator Ruston said the establishment of a single peak body was an important step that would allow industry to effectively speak with one voice, highlighting the good work that had been done and responding to future demands.

To help develop a commercial peak body for the seafood industry, the government provided $500,000 in May 2015 to the National Seafood Industry Alliance.

She said that in terms of progressing good policy outcomes, any industry that could come to government speaking with one voice was likely to be far more successful in achieving its outcomes. “Coming to government with a heap of different opinions will mean you’re unlikely to get any outcome, or worse the government may choose the ones which invariably no one really wants.”

“Cutting red tape is at the heart of this government’s mission to build a strong and prosperous economy and has been an ongoing focus for this portfolio over many years, and believe me this is very, very close to my heart,” Senator Ruston said.

“Our aim is to provide the best possible settings to ensure sustainable use of fisheries resources, while supporting the fishing industry and reducing red tape. All of this work is designed to ensure that your industry is able to respond to market demand in the most agile, innovative and effective way possible.

“However, there are many other challenges that must be overcome in order to realise that success, and they are challenges that both government and industry must embrace.

“A strong policy foundation alone will not be enough. Neither is it enough to simply be good at what you do, to produce a premium product for global markets, and to do that efficiently, sustainably and responsibly.

“The harsh reality in today’s media environment – which is far broader than news media alone – is that popular opinion and an understanding of the real values of the Australian seafood industry will be central to your future success.

“This is because the legitimacy of any industry is only as strong as the community sentiment that supports it. We all know that modern industries face the challenge of social licence, but you could certainly make the case for seafood to be a textbook example of this challenge,” Senator Ruston said.

“Frankly, in light of the sheer volume of rigorous science that underpins Australian fisheries management, it’s difficult not to be left somewhat speechless at times by some of the anti-fishing campaigns.”

She said these kinds of campaigns were symptomatic of a much broader issue that challenged not only the science that underpinned the management of Australian fisheries, but the legitimacy of commercial fishing in the eyes of the public.

“It is a battle for the hearts and minds of Australian seafood consumers. To win this battle, the seafood industry must have a clear and united voice. In the absence of that voice, the loudest voice will prevail, regardless of the facts.

“In short,” Senator Ruston said, “a strong and united industry voice is the defining challenge for the modern Australian seafood industry.”

She said she would enthusiastically continue to support the industry through the next phase and was looking forward to working with the whole seafood and aquaculture sectors to create a vibrant future for Australian fisheries and aquaculture.