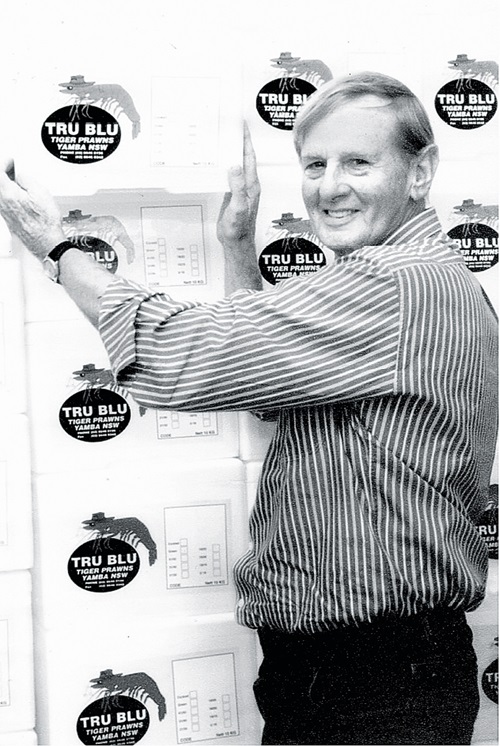 The success of the Australian prawn farming industry owes much to the entrepreneurial spirit and drive of Frank Roberts, who harvested the country’s first commercial crop from prawn ponds on his converted cane farm at Yamba, New South Wales, in 1984.

The business he began more than 30 years ago continues to operate as Tru Blu Prawn Farms, and the industry he helped to pioneer is today worth more than $70 million nationally.

Taking on prawn farming was a high-risk venture – capital-intensive with hazards that ranged from cold snaps or disease, to hungry cormorants and human poachers.

Although Frank Roberts was known as something of a gambler, when he made a decision he stuck by it, be it right or wrong, and he had decided that prawn farming was the industry for him.

It did not matter that everyone said it would not work, or that there was no long line of experienced farmers to learn from. More than once his crops were wiped out and he faced financial ruin, but he pressed on, ultimately becoming recognised as a prawn farming authority.

A longtime member of the Australian Prawn Farmers Association, Frank Roberts helped to lead the way for others, sharing his hard-won expertise. Always the innovator, this included trialling the export of live Tiger Prawns (Marsupenaeus japonicus) to Japan, which ultimately proved unviable.

Many others have taken up prawn farming since Frank Roberts launched his new venture in 1983, and the industry has attracted significant government-supported research to overcome the challenges. With improved genetics and production processes, the industry he helped to found has become one of the most productive and sustainable prawn-farming systems in the world.