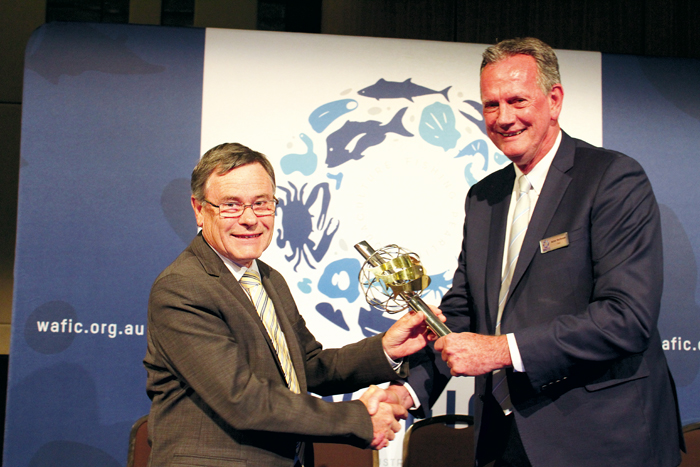 The 2015 Seafood Directions conference held in Perth in October has drawn the industry more strongly towards a single, focused course of action for the future. More than 300 delegates attended the biennial conference, which this year had the theme ‘Selling our story’.

While delegates heard about several international and local initiatives designed to promote sustainable seafood, the presentation that resonated most was from Joshua Stoll, co-founder of the US-based Walking Fish co-operative, whose conference attendance was sponsored by the FRDC.

He outlined a local marketing initiative that has helped to improve the viability of small-scale fishers in North Carolina, with a model that has since spread throughout the US and Canada.

He said local and direct marketing was a tremendous opportunity for fishers to sell their story. But more than just a marketing ploy, it was a livelihood strategy that provided a broader opportunity to build community capacity.

“When you live the story, the story sells itself,” he said.

Joshua Stoll says the model allows community members to invest in fishers and their fisheries, and to engage in new conversations about sustainability and conservation. As consumers, there are opportunities to try unfamiliar fish species and to make fish a regular part of their diet.

For fishers, it has increased returns by more than 30 per cent. It has also encouraged greater communication and cooperation among fishers, and with management agencies and consumers.
The conference was officially opened by Assistant Minister for Agriculture and Water Senator Anne Ruston who told delegates the seafood industry needed to drive its own strategy and sell its own message.

“The legitimacy of any industry is only as strong as the community sentiment that supports it. The battle is for the hearts and minds of the Australian seafood consumers. To win this battle the seafood industry must have a clear and united voice,” she said. 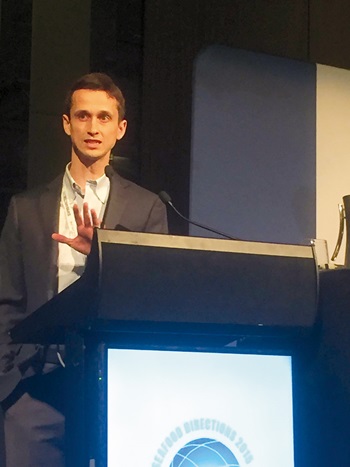 “When you live the story, the story sells itself.” – Joshua Stoll, co-founder of the US-based Walking Fish Co-operative
Photo: WAFIC

She said that the industry also needed a united voice if it was to effectively deal with government, and to help the government and government agencies create the best possible environment in which the industry could operate.

Local success stories featured in many presentations, as well as works in progress and familiar challenges. Several speakers highlighted efforts to assess and certify the sustainability of fisheries, with a growing emphasis on social sustainability, in addition to environmental sustainability.

Chief executive of the Marine Stewardship Council (MSC) Rupert Howes outlined how the MSC certification program had gained momentum and international recognition in the 15 years since it was launched. Certification has often been viewed as a marketing tool that could help fisheries attract a premium, or as an insurance policy to help protect the reputation of a fishery.

However, Rupert Howes said the fundamental aim of the program remained to improve the sustainability of fisheries around the world by identifying processes that could be improved and encouraging change.

Western Australia reported on the progress of its initiative to assist all of its fisheries towards MSC certification. (The Exmouth Gulf and Shark Bay prawn fisheries both received accreditation in the lead-up to the conference.)

However, Kim Walshe, manager of the WA Department of Fisheries certification program, reported that full certification would be a difficult process for many of the state’s small-scale fisheries. More than half of WA’s fisheries fell into this category, he said, with 10 or fewer licence holders, and an annual value of less than $1 million.

Small-scale fisheries and the MSC were also central to the Project Inshore initiative developed by the UK-based fishing industry authority Seafish, which was outlined by the FRDC-sponsored keynote speaker Tom Pickerell, the technical director at Seafish.

Tom Pickerell said while many suppliers had committed to sustainable purchasing policies, it was difficult for many of Britain’s smaller, data-poor inshore fisheries to demonstrate sustainability, and they were losing access to markets because of this.

Seafish had partnered with the MSC and many other government, industry, producer and supplier agencies to map inshore fisheries – within six nautical miles of the coast. The mapping identified 450 different species and gear combinations, and allowed Project Inshore to prioritise fisheries for the development of management plans and an MSC pre-assessment.

Tom Pickerell said this established a baseline for the performance of these fisheries, which would allow them to demonstrate sustainable practices, even if they did not proceed to full MSC certification.

He said the involvement of suppliers in Project Inshore was important in that it allowed them to confidently purchase seafood from these small-scale fisheries by identifying the fisheries’ alignment with sustainable practices.

In another initiative, Seafish has developed the Risk Assessment for Sourcing Seafood (RASS) tool for wild-harvest seafood species, which is available through the Seafish website.

RASS combines fisheries data from other sources and develops a score from 1 (very low) to 5 (very high) for the potential “reputational risk” to a business based on four criteria: stock status, management, bycatch and habit.

He said RASS did not provide an amalgamated score or a ‘buy’ or ‘don’t buy’ recommendation. “Rather than you having to align with our philosophy of what is good and bad, this tool allows the buyer of seafood to comply with their own corporate social responsibility commitments,” Tom Pickerell said.

Niklas Wehner, from the Secretariat of the Global Sustainable Seafood Initiative (GSSI), agreed with the approach of the Seafish RASS program, which allowed users to select the level of performance they were comfortable with. In his presentation he said the newly released GSSI benchmarking tool worked in a similar way.

It provided a baseline to assess how different fisheries accreditation systems performed, allowing users to compare their programs with the benchmark.

Interactions between the fishing community and resources sector were the theme of several presentations, including from Bertie Armstrong of the Scottish Fishermen’s Federation. He said that in Scotland the resources sector had significantly infringed on traditional fishing grounds over the past 50 years, causing considerable conflict between the two sectors.

But rather than seeking compensation for lost resources, the federation had identified an opportunity to work with the resources sector. It established a commercial division, providing commercial services that generate income for fishers and for the federation itself.

Bertie Armstrong said the interaction between the two sectors on a commercial arrangement had improved the basis of communication between them and understanding of how each operated.

In other presentations, Katherine Winchester from the Northern Territory Seafood Council championed country-of-origin labelling for seafood. She said the development of a national marketing campaign would lose its impact without the support from regulation requiring the hospitality industry to identify where its fish came from.

Janet Howieson, from Curtin University’s Centre of Excellence for Science, Seafood and Health, and WA fisher Peter Jecks also outlined their efforts to streamline the development and marketing of new products. However, Peter Jecks said restrictions in distribution channels were undermining the process of product development.

A small number of wholesale distributors created a bottleneck in the system, he said. Even when these companies had agreed to list new products in their inventory, they were reluctant to deal with small quantities. Peter Jecks called for a series of national seafood hubs that could effectively centralise small quantities of product for cost-effective national distribution.

This would also more closely link seafood producers with end users, without the need for wholesale distributors as intermediaries of ‘approved’ inventory.

The FRDC’s executive director, Patrick Hone, provided a concluding summary for the conference saying the overall message was positive. There was plenty of evidence of the passion and pride that fishers have for their industry.

He said the conference also identified opportunities to engage better with the rest of the world. Fisheries sectors internationally were facing similar challenges, operating in a “parallel universe” and Australian fisheries could learn more from greater interaction at an international level.

There was also a clear message that fisheries needed to be a stronger part of local communities. “It goes beyond the point where you catch the fish. You have to reconnect and innovate and be part of that community. We need to reconnect and build pride and trust in the local product,” Patrick Hone said.

“This is all about making sure we have a viable, positive industry that our children want to go into, whether they are scientists, fishers or managers. We want an industry that people feel proud to be part of.”

He said there was a lot of positive activity within the industry, and the challenge now was to direct that towards a single, coordinated course of action, where players recognised their own roles as part of the larger story.