Winner of the New Scientist Eureka Prize for Science Photography was Gary Cranitch, from Queensland Museum, with an image titled ‘Soft Coral’.

Aileen Elliot from Murdoch University took second place with her photo of a Thorny Headed Worm taken during a chance encounter with the parasite while doing diagnostic work as part of an FRDC-funded project.

QX disease is a perennial problem for Sydney Rock Oyster growers, with mortality rates of more than 90 per cent during serious outbreaks. The first major outbreak of the disease occurred in northern New South Wales and southern Queensland estuaries in 1974-75.

Later outbreaks have devastated whole estuaries, killing millions of oysters practically overnight and forcing many growers to leave the industry. In NSW, the oyster industry is estimated to directly employ more than 1500 people; when businesses close it can have a significant impact on local communities.

David Raftos says while QX disease does not affect every oyster-producing estuary, it can be a major impediment to production in those estuaries it does affect. His research has focused on identifying the genes responsible for conferring resistance to QX disease.

He says that in 1990 the NSW Department of Primary Industries, with the assistance of the FRDC, introduced a selective breeding program for Sydney Rock Oysters that has helped to improve QX survival rates.

“What we are trying to do is to use our understanding of the genetics of disease resistance to improve survival rates even more. There are several genes that contribute to the survival of oysters in the face of QX disease and we have undertaken our first experimental breeding trial using parents that carry those genes.”

He says the initial results suggest a potential improvement in survival rates of 30 per cent for oysters selected on the basis of the newly identified resistance traits. “There is still a lot of work to verify the findings, but these sorts of results in a single generation would be a dramatic improvement, if they hold up.”

Another program under his supervision is the ‘priming’ of the immune response in Pacific Oysters (Crassostrea gigas) to enhance resistance to Pacific Oyster Mortality Syndrome (POMS) in their progeny.

David Raftos says the POMS project is still at the fundamental research stage, and is being undertaken by research fellow Tim Green, who has also worked in France where POMS is a major problem for oyster growers.

He says molecules from the virus are injected into oysters and this primes their immune system to respond to the actual virus. Early findings indicate that the primed oysters have a greater resistance to later exposure to POMS. New laboratory trials will also analyse the resistance in progeny of the primed oysters to POMS. 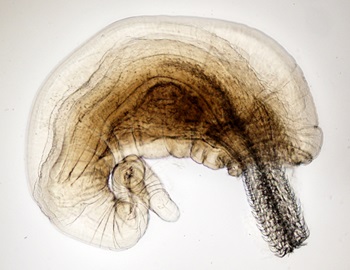 Aileen Elliot is a parasitology technician at Murdoch University in Western Australia who discovered the subject of her image while undertaking some diagnostic work as part of a freshwater fish health survey funded by the FRDC.

She says the worm popped out from one of several cysts removed from an Eel Tailed Catfish (Tandanus tropicanus) caught in the Barron River, Cairns, and sent to her for ide

ntification.“Seeing amazing life forms, such as this Thorny Headed Worm (phylum Acanthocephala), has the power to turn a mundane day in the lab into one of sheer brilliance,” she says.

“Through this image and others like it I get to share my modern-day Darwinian moments of discovery with others and hope to excite and inspire the next generation of budding parasitologists.”

Her images are part of the teaching resources for veterinary, animal science and biomedical students, and are also part of Murdoch University’s in-house parasite museum.