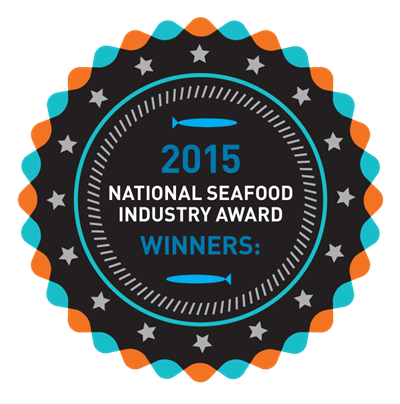 The largest-ever seafood industry awards night provided a gala conclusion to the successful 2015 Seafood Direction conference in Perth, with well over 400 guests attending the event at the Crown Perth convention centre to celebrate the industry’s leaders.

Chair of the Seafood Directions conference committee Arno Verboon said the standard of entries for the national awards was excellent, making it difficult for the judging panel of five. However, Huon Aquaculture was a stand-out for its ongoing commitment to innovation and improvement in its production practices and product quality, and to promotion of the seafood industry in general.

As pioneers of the Australian Atlantic Salmon industry, Huon Aquaculture’s founders and owners Peter and Frances Bender started their company in 1986. From one staff member and one pen of fish, the business has grown to become Australia’s premium producer of Atlantic Salmon, with 550 employees producing 17,000 tonnes of fish a year.

Since 2013 the company has introduced major changes to its operations, making the business a leader in global best practice in sea-cage design, occupational health and safety, feeding and animal husbandry technologies and online sustainability reporting.

Bringing the catch to customers, New South Wales wholesaler and retailer De Costi Seafoods was named as the Best Large Business for its constant product innovation and pursuit of excellence, based on the principles of providing a diverse range of quality, sustainably produced seafood, with outstanding customer service.

Wholesaler Central Seafoods in Western Australia won the Best Small Business Award. Established in 2011, the wholesale fish business is a relative newcomer, but is well supported by local industry. Its use of high-profile, branded fridge and freezer cabinets in retail outlets, clear labelling, convenient serving sizes and packaging combined with online marketing has contributed to a rapid growth in sales.

The Best Promotion awardee, Love Australian Prawns campaign, successfully united prawn farmers and wild-catch fishers in the first national campaign run across an entire seafood category. Now in its third year, the campaign has increased awareness of Australian prawns, leading to increased prices and an increased profile for prawn fishers and farmers across the county.

In Perth, chef Peter Manifis and co-owner Anna Watts go further afield to source the very best seafood from around Australia for their Incontro Restaurant, which won the Best Restaurant Award. This includes difficult-to-source, seasonal seafood, with up to 11 species on the menu at any one time. 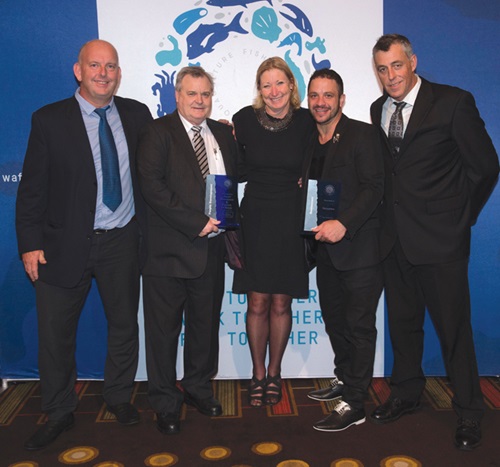 Often dealing direct with fishers, their criteria include sustainability, quality and care in handling along the entire supply chain.

The project was led by Janet Howieson, of Curtin University’s Centre of Excellence for Science, Seafood and Health, and Patrick O’Brien at the West Coast Institute of Training, and addressed an identified gap in the seafood training for certified chefs and trained apprentice chefs in the selection, care and preparation of a diverse range of seafood.

Northern Territory fisher Bill Passey, of Australia Bay Seafoods, was named Seafood Industry Ambassador for his contribution over 50 years to the development of WA’s rocklobster fishery, and three NT fisheries: drop line and trap; finfish trawl; and demersal trawl. This includes his development of the semi-demersal trawl net, the Wendy net and bycatch reduction devices, which have become the mandated industry standards to ensure the sustainability of trawl fishing in the north.

A collaboration between the Northern Prawn Fishery and the refrigeration specialist consultancy The Expert Group won the National Research, Development and Extension Award.

The refrigerant currently in use is being phased out internationally. This Australian Seafood Cooperative Research Centre project developed and tested new high-efficiency refrigeration designs to help trawlers select a replacement refrigerant capable of meeting the fishery’s needs, which are among the most demanding refrigeration requirements in the world (see FISH September 2015).

The Environment Award was presented jointly to two clean-up campaigns, the Darwin Harbour Clean-Up and the South West Tasmanian Debris Cleanup team, led by rocklobster fisher Dave Wyatt and environmental consultant Matt Dell. This award recognises contributions to the protection and rehabilitation of aquatic environments, and efforts to reduce adverse impacts of the seafood industry on the environment.

The Darwin Harbour Clean-Up has been running since 2010 as a work-day clean-up involving many businesses and agencies that work on the water on a daily basis, rather than volunteers. More than 17 tonnes of rubbish has been collected from the harbour in the six annual clean-ups.

The Tasmanian event has been running since 1999 as a week-long clean-up of remote beaches on Tasmania’s south-west coastline, which are generally only accessible by boat. In 2014 more than 47,000 items of rubbish were collected by the 20 volunteers involved.

Terry Adams, WA
Terry Adams (deceased) discovered Greenlip Abalone in commercial quantities in the Augusta region of Western Australia, established a professional abalone fishery in the area and laid the foundations for abalone aquaculture in Flinders.

He was also active in salmon, tuna, rocklobster, snapper, shark and scallop fisheries at a time when societal attitudes to the use of marine resources challenged the fishing industry.

He provided leadership through local and industry representative bodies, including the Western Australian Fishing Industry Council, to respond positively to these challenges, and supported management that combined sustainable fish stocks and responsible harvesting as a basis for profitable enterprises. He was a committed practical, conservationist who made a significant contribution to the conservation estate in WA.

John Cole, WA
Based in the small fishing town of Dongara in Western Australia, John Cole has been actively involved in the fishing industry for more than 50 years, taking on leadership roles at a local, state and national level. These ranged from the Dongara Professional Fishermen’s Association to the chair of the Western Australia Fishing Industry Council.

John Cole was also heavily involved in the consultation process that helped to establish the FRDC and the Australian Fisheries Management Authority in the 1990s. In 1990 John was awarded membership in the Order of Australia (General Division) AM for services to the fishing industry.

He also helped to initiate the process that led to the formation of the Western Rock Lobster Council, serving as chair in 2009-10, and continuing as a director today.

Peter Dundas-Smith, NSW
Peter Dundas-Smith has shown leadership and dedication to the future of the Australian seafood industry through his numerous and varied roles over the past 22 years.

He has also been a member of numerous advisory bodies related to the fishing industry and the science community. He continues to advocate for his longstanding vision for the industry: united under a single entity charged with the responsibility for contributing to the economic, environmental and social sustainability of the seafood industry.