Australian perspectives and memories on FOA code of conduct

In the 1980s several of Australia’s leading fisheries were near the point of collapse – Southern Bluefin Tuna, Eastern Gemfish, and Orange Roughy among them – sparking a major reform of fisheries management in Australia (and internationally).

Geoff Gorrie, who was head of the Australian Fisheries Service within the Australian Department of Primary Industry and Energy at the time, says many steps have since been taken to redress these fisheries declines. 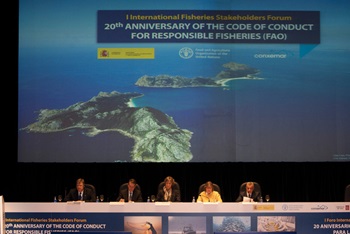 Participants in the Ministerial Round Table on Blue Growth, held as part of the first International Fisheries Stakeholder Forum in Spain in October 2015, marked the 20th anniversary of the Food and Agriculture Organization’s Code of Conduct for Responsible Fisheries.
Photo: FAO

This included Australia introducing new Commonwealth legislation as part of a nationwide fisheries management reform in the early 1990s. Geoff Gorrie says it was the first legislation in the world based on the principles of ecologically sustainable development. The reforms also established the Australian Fisheries Management Authority (AFMA) as a single, focused agency to oversee management of Commonwealth fisheries.

This early response to fisheries declines meant Australia had relevant experience to contribute to the development of the Food and Agriculture Organization of the United Nations’ (FAO) Code of Conduct for Responsible Fisheries, which celebrated its 20th anniversary this year.

Australia’s reforms also included the introduction of transferable quotas, in line with total allowable catches. Over-capacity in the Northern Prawn Fishery was identified, which later led to industry and government-funded buyback initiatives. Management advisory committees were also established to more closely involve the fishing industry and other stakeholders in fisheries management.

AFMA is one of the leading agencies implementing the FAO Code in Australia, and the executive manger of AFMA’s fisheries management branch, Nick Rayns, says it takes the Code seriously.

The principles are built into national policies and legislation, with management targets set to meet or better the Code’s performance outcomes.

The FAO Code uses maximum sustainable yield as a target for fishing effort – a default to preserve 40 per cent of a fish stock’s biomass.

But AFMA often takes an even more conservative approach, using maximum economic yield, preserving 48 to 50 per cent of a stock’s biomass.

“Our aim is not to catch as many fish as we can, but to maximise the value of the fishery for Australian society as a whole,” Nick Rayns says.

Good information on the status of fish stocks is essential to achieving this, but the required research has not happened overnight. In the 1990s Australia was commercially fishing 80 or 90 different stocks in Commonwealth waters without a real understanding of the status of most of those stocks, Nick Rayns says.

“Since then we have slowly but surely worked through almost 100 fish stocks and have good information on almost all of those to the point where they can be independently assessed,” he says. This involved a huge amount of work and effort by government and industry, with up to $10 million a year spent on research.

“It has put us in the position where we have some of the best-managed and best-understood fisheries in the world. And it has only been possible in partnership with many people and organisations, including CSIRO, the FRDC, the fishing industry and other government agencies.”

Nick Rayns says while Australia meets and exceeds the requirements of the FAO Code there is still further work to do, including efforts to reduce interactions with protected species. In July this year electronic monitoring, a system using tamper-proof onboard video cameras and sensors, became mandatory in three Commonwealth fisheries: the Western and Eastern Tuna Fisheries, and the Commonwealth Gillnet, Hook and Trap Fishery. The system will monitor catches and also interactions with protected species to verify industry logbooks.

With a longstanding involvement in the management of fisheries research, most recently as chair of the Australian Seafood Cooperative Research Centre, Peter Dundas-Smith agrees that Australia has performed well against many of the FAO Code’s principles.

He says principles with an environmental focus, which have been taken up by fisheries managers as their core business are managed very well. But there remain gaps when it came to those principles with a post-harvest focus.

“There are still a small handful of principles largely relating to the product, its quality and nutritional value, marketing and trade that we don’t do that well, as an industry. Fisheries management would see this as not their bag, but industry is not good at picking up these sorts of things either, and it is hard to get investment in these areas,” Peter Dundas-Smith says.

Sustainability certification is one of the market trends to emerge in global fisheries during the past decade, allowing fisheries to align themselves with the objectives of the FAO Code. Certification programs use the technical eco-labelling guidelines developed to supplement the FAO Code, as well as the Code itself as the foundation for certification.

A project to investigate what might be involved in developing an Australian Standard for responsible fisheries management is already underway. Partners in the project include AFMA, CSIRO and the FRDC. This aligns with work being also done to develop a fisheries science Standard.

Sevaly Sen, who is the lead researcher working on the project, says demonstrating that fisheries are responsibly managed is an ongoing issue. Working with Sydney Fish Market, she has evaluated the Responsible Fisheries Management (RFM) scheme – which is being used in Iceland and Alaska and other parts of the US – as a potential fit for New South Wales fisheries, which are the major source of seafood sold through Sydney Fish Market.

She says her research found that current third-party certification schemes, be it Marine Stewardship Council or RFM, work well for data-rich fisheries.

However, it is difficult for small-scale and data-poor fisheries to meet their requirements, and many Australian inshore fisheries fall into this category.The search for an alternative method to independently verify that fisheries are responsibly managed continues.

It is not just an issue for Australia, Sevaly Sen says. More than 80 per cent of fisheries (by volume) around the world are not third-party certified. However, that does not mean they are all unsustainable or irresponsibly managed.

The challenge is to identify ways to provide credible, low-cost and independent verification that these fisheries are responsibly managed.

She says these data-limited fisheries may need something that is fit for purpose, not a watered-down version of something that already exists to assess larger fisheries. “It’s a different world they operate in.

And many of these fisheries may never have the level of data we would like them to have, although technology to collect data is getting cheaper and will help.

“Going forward, we need to look at how to ensure that small-scale fisheries are not disadvantaged in the market and that these fisheries can defend their sustainability credentials when access is under threat.

The FAO Code is important because it is a consensual document, and has been a guiding light. But we have to make sure it is interpreted and applied in a way that is appropriate to small-scale fisheries,” she says.