A stomach for history 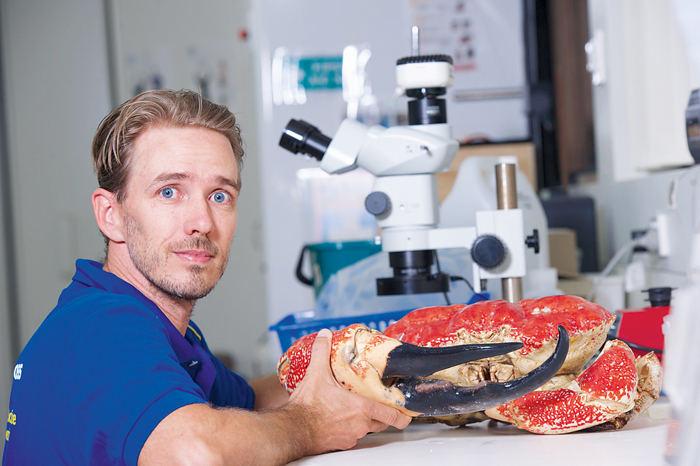 Crustaceans are a notoriously difficult-to-age animal group. Because they grow by moulting, it was always presumed that their hard parts could not contain any chronological growth record. However, researchers are challenging this assumption and making advances towards solving the longstanding problem of crustacean age determination.

Accurate age information is valuable for fisheries management because it provides the basis for important productivity, growth and longevity calculations.

In 2011, researchers from the Southern Cross University (SCU) Marine Ecology Research Centre (MERC) hypothesised that gastric ossicles might hold the key to solving the ageing problem.

The research team, led by Jesse Leland and Daniel Bucher (MERC) and Jason Coughran (Sheridan College, Perth), applied traditional direct fish-ageing methods to the gastric ossicles of crustaceans and reported the presence of growth marks that could equate to chronological age. 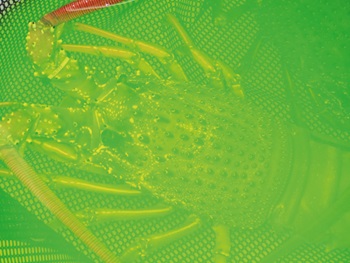 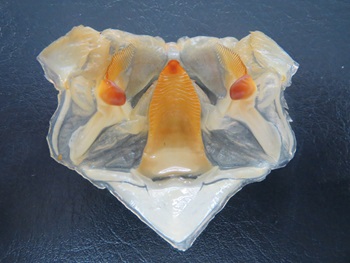 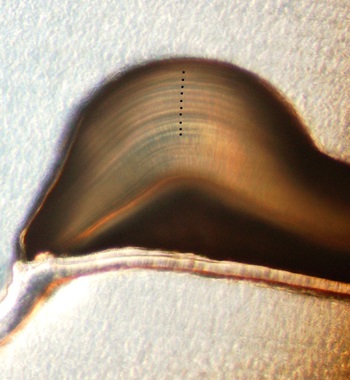 Rock lobsters and crabs have gastric ossicles – bone-like structures with teeth – in their stomachs for grinding food. The innovative ageing method involves cross-sectioning ossicles and counting growth marks that are deposited within them.

The idea came while researchers were discussing the use of ossicles in freshwater crayfish taxonomy. They reasoned that any calcified structure could contain growth marks and were pleasantly surprised to find that the ossicles did.

However, before ossicular growth marks can be used to accurately determine age, researchers must provide species-specific validation of how regularly they are deposited.

In 2013, the MERC research team began a small-scale validation study using a relatively short-lived and well-studied freshwater species, Redclaw, to assess the periodicity of ossicular growth marks. This study was funded through the FRDC-sponsored 2013 Department of Agriculture, Fisheries and Forestry’s Science and Innovation Award.

Recently the findings were published in the open-access journal PLOS ONE in the article ‘Direct age determination of a subtropical freshwater crayfish (Redclaw, Cherax quadricarinatus) using ossicular growth marks’. The Redclaw study clearly demonstrated for the first time that crustacean ossicles retain a record of events that occurred during the animal’s life.

This opens the way for future age-validation studies, showing that formal accuracy assessments are possible. The study presented strong evidence that ossicular growth marks are deposited annually in Redclaw, but called for further research to provide a definitive validation.

In the past, the ages of crabs and rock lobsters could only be estimated from indirect methods such as tag-and-recapture. Such methods can indicate approximate age – plus or minus a few years – but their accuracy is somewhat limited, particularly for long-lived species.

Marine ecologist Daniel Bucher says the study is an important turning point for the fisheries industry since the ability to determine the age of harvested animals is central to assessing whether fishing levels are sustainable.

“Several research groups around the world are taking up our method, with each new publication really increasing the existing knowledge base,” Daniel Bucher says. “This makes for an exciting time in a new research field.

“The Redclaw study is also the first published work to demonstrate effectiveness using a subtropical freshwater species, which extends the applicability to many other Australian regions.”

Freshwater ecologist Jason Coughran says the findings are also a welcome breakthrough for conservation efforts. “Around the world, freshwater crustaceans are increasingly being recognised as a highly imperilled group of animals,” he says.

“Research on these animals has been hindered by a lack of accurate age information. Tagging studies indicate that some freshwater crustaceans are very long-lived, perhaps 40 years or more. The potential to definitively establish longevity now promises to reshape the broader work on protecting these species.”

The ultimate aim is to use the method for age-based stock assessments within major Australian fisheries, but while we now know that it can work there is still further research needed to explain the processes and mechanisms involved.

The ageing method is currently being applied to the Western, Eastern, Southern and Tropical Rock Lobsters and to Giant, Crystal and Mud Crabs as part of a two-year national project funded by the FRDC in 2014.

More than 400 specimens have been collected from tropical, subtropical and temperate regions in Australia for the project, which will produce the world’s first direct age and growth models for the long-lived Western and Eastern Rock Lobsters.

To assess growth mark periodicity, some rock lobsters and crabs were stained with a fluorescent dye called calcein. After 18 months, researchers will check how many growth marks were deposited during that time. If the growth marks are annual then only a single mark should be deposited each year.

Another validation technique that is being applied is the analysis of ossicular composition using laser ablation. Laser ablation analysis can identify cyclical changes in the ossicle composition, which reflect changes in seasonal temperature (for example, summer to winter). This can be compared with the number of visible growth marks. Hopefully, this will provide further insight into the periodicity of ossicular growth marks in Australian crustaceans.

Due to the fundamental importance of age information for sustainable fisheries management, the FRDC project has received strong support from industry groups including the Western Rock Lobster Council and NSW lobster industry.

Other government institutions such as CSIRO Marine and Atmospheric Research are also supportive of the project.

The preliminary results are positive. Researchers have identified a strong relationship between size and the number of ossicular growth marks for six of the seven species, with estimated ages being broadly consistent with existing age and longevity information.

The laser ablation analysis component was recently completed, while the validation grow-out is ongoing. There is considerable excitement in Australia and elsewhere about the usefulness of direct ageing methods, but a definitive periodicity validation is essential before extending it further.

The building of the scientific knowledge base required for routine validation of finfish took almost a century. Such prior knowledge is advantageous and will hopefully facilitate a comparatively rapid development for crustacean ageing, but there are still challenges to overcome before this longstanding problem is solved.

To further age-related innovation, MERC researchers will convene for a crustacean ageing workshop at SCU in 2016 as part of the FRDC project. Fisheries scientists and collaborators from around the country are expected to attend.