Wine month revellers get a taste for oysters 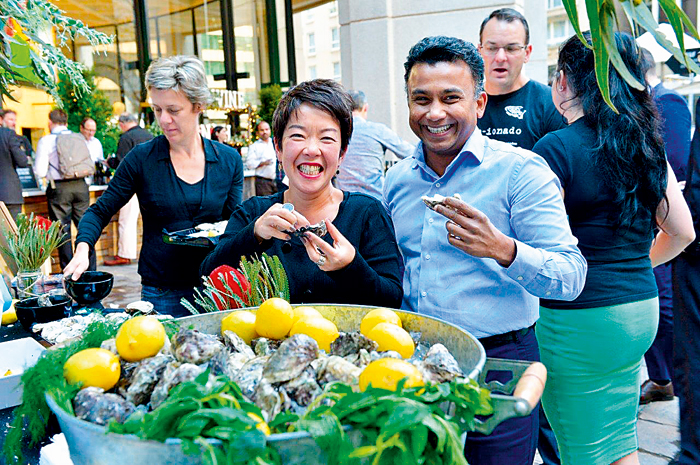 It is the first week of May and Australia Square in Sydney’s CBD is bustling with activity; glasses clinking as they are unpacked, wines are unboxed and hessian bags brimming with fresh oysters hauled in, ready for the two-day launch of Aussie Wine Month on 6 and 7 May.

The oysters are a mixture of Native Oysters, Sydney Rock Oysters and Pacific Oysters, from a select number of growers on the New South Wales coast. Severe storms and flooding in the lead-up to the event reduced the number of growers represented at the event, but more than 280 dozen oysters were still sourced to showcase a variety of species and regional variations.

The FRDC’s manager of communications, trade and marketing, Peter Horvat, says the pop-up cellar door event run by Wine Australia was a great opportunity for the seafood industry to benefit from the media attention and awareness generated by Wine Australia’s Aussie Wine Month.

The 2015 event was the second time the FRDC has coordinated the promotion of seafood at the Sydney launch of Aussie Wine Month. In 2014 prawns and Atlantic Salmon were the feature seafoods. 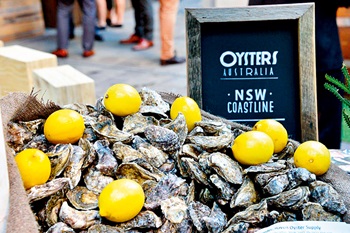 Last year a dozen TAFE students spent many hours peeling the 100 kilograms of prawns provided in preparation for the event. This year Joe Zappia and Les Maisi from Sydney City Oysters were on hand to help coordinate the delivery of live oysters direct from the growers and to shuck them on the spot – more than 3300 in all – for customers.

Joe Zappia says shucking the oysters fresh and serving them unrinsed, with the full flavour of the oyster’s juices, was a point of difference for consumers, many of whom had only experienced oysters pre-opened and rinsed.

They were also able to compare the different regional and species flavours, from the creamy Merimbula Sydney Rock Oysters, to the full-flavoured native flat oysters from the Clyde River (which were only opened for serious oyster lovers).

At the same time, customers were asked questions about their interest in opening their own oysters so that they could experience ultimate oyster tasting for themselves – freshly shucked and unrinsed in the shell.

About 1500 people attended the two-day Aussie Wine Month launch, most of whom were aged 25 to 45 years and who worked in and around Australia Square.

Peter Horvat says the significant media coverage of the event was a positive outcome, reaching more than four million readers through print media and another 140,000 people via Facebook and Twitter.

Oysters Australia used the event to add to its consumer research in the 25 to 45-year-old city worker demographic. Oysters Australia executive officer Rachel King says the industry wants to increase the number of people who can open their own oysters to enjoy a premium eating experience.

Customers eating oysters surveyed at the Wine Month launch were asked if they ate oysters at home and if they could open the oysters themselves.

The survey found that: