The heightened profile of seismic activity in Australian waters is generating new science about potential effects, answering some questions and dispelling some misconceptions

There has been a recent deluge of requests seeking comment from fishers about proposed seismic surveys in Australia’s petroleum hot spots. While this suggests that offshore activity is on the rise and has generated increased concern about the potential effects on fisheries, the reverse is in fact true. 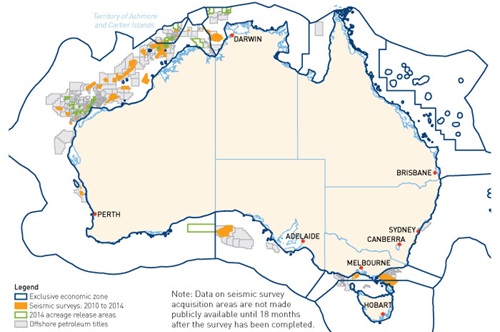 Matt Smith, from the National Offshore Petroleum Safety and Environmental Management Authority (NOPSEMA), says the number of surveys has decreased in the past three years.

What has increased is the level of consultation now required between the petroleum industry and other marine stakeholders, including fishers.

This follows changes to legislation in February 2014 that also made NOPSEMA the sole environmental regulator of offshore oil and gas operations in Commonwealth waters.

Matt Smith says while the new consultation requirements involve more effort for all those involved, they also provide more protection for fisheries against the potential effects of petroleum-related activities.

There are considerable concerns about the impact of surveys that involve the use of air guns, which discharge high-pressure air into the water every few seconds while criss-crossing the oceanic survey area.

The process then uses the pressure waves reflected back from the seafloor to create an image of the rock layers below the seabed and to reveal any potential oil or gas reserves.

In recent years exploration has expanded to include potential sites for carbon sequestration, particularly in the Gippsland basin off Victoria’s south-eastern coast.

Canadian research has documented evidence of physical damage to fish directly in the path of the high-pressure air gun blasts, but there has been little research on the longer-term impact on fish or on the effects of the survey process on invertebrate species.

Prior to environmental streamlining in February 2014, Matt Smith says fishers may only have been consulted on some seismic surveys.

Prior to environmental streamlining both the Environment Protection and Biodiversity Conservation Act 1999 (EPBC Act) and the Offshore Petroleum and Greenhouse Gas Storage Act 2006 applied.

But the focus of the EPBC Act on threatened, endangered and protected species did not necessarily extend the same level of consultation or protection to commercial fisheries, he says.

As an example of the increased protection provided by the new arrangements regulated by NOPSEMA, Matt Smith points to applications for seismic surveys off Eighty Mile Beach in Western Australia.

Four different applications were received for ‘speculative’ surveys off Eighty Mile Beach south of Broome, from the 30-metre seabed contour to the 200-metre contour. The area of the proposed surveys extended from about 40 kilometres offshore to almost 200 kilometres.

The adjacent inshore area is home to the only commercial wild pearl oyster fishery of its kind in the world, and it underpins Australia’s high-value pearl industry.

The Pearl Producers Association (PPA) was concerned about the pearl oyster broodstock spawned in areas out to the 100-metre contour and possibly beyond. Any potential damage to the broodstock and the spawning process would jeopardise the future of the industry.

Matt Smith says that under the pre-February 2014 public consultation arrangements, it is possible that the PPA may have only received notification of the survey going ahead rather than being consulted on the proposed seismic activity, which is now part of the mandated consultation process.

While the PPA had strong anecdotal evidence from reputable scientists that spawning was occurring beyond the areas of the pearl beds, there was no published science to support their case. At the same time, there was also no definitive evidence to support the applicants’ position that the oysters would not be affected.

With a substantial modification to the proposed surveys to address the PPA concerns, the survey applications were accepted by NOPSEMA.

The PPA remains concerned about the potential effects of seismic surveys on the pearl oyster population and has called for research to provide definitive scientific information on its ecological effects.

The pearl oyster case highlights two of the seismic-related issues that FRDC-funded projects underway are already working to address. One is managing the consultation processes, the paperwork and closer relationships between the petroleum industry and fisheries. The other is the gap in the science about the effects of seismic surveys.

Jayson Semmens at the Institute for Marine and Antarctic Studies is leading the project to investigate the effects of seismic surveys on Southern Rock Lobsters and scallops.

The project was initiated by the Scallop Fishermen’s Association of Tasmania following concerns about a decline in scallop beds in the Gippsland Basin and Bass Strait.

Partners in the project include Curtin University, Origin Energy and the Victorian Department of Environment, Land, Water and Planning, which operates the national CarbonNet (carbon sequestration) project for the Australian Government.

Jayson Semmens says the three-year project is analysing both the immediate effects of air gun blasts on scallops and rock lobster and longer-term physiological effects, using both laboratory and field tests.

In the case of rock lobsters, this includes the effects on offspring, as berried female lobsters are included in the experiments. Both rock lobsters and scallops are placed, in containment, on the seafloor and are subjected to air gun blasts. Blood tests are part of the work to measure physiological responses, while video is used to document behavioural responses.

Meanwhile, working with Seafood Industry Victoria, researcher Ian Knuckey has been investigating ways to optimise the communication and operational processes of seismic surveys for the fishing industry and the oil and gas industry.

The paperwork is one issue that can seem overwhelming, he says.

Fishers can come home from extended time at sea to find a mass of notifications from several different players, who may all seem to be proposing something similar.

“Simply keeping track of all the different stages of multiple operations is a challenge for fishers,” he says. “On the other side of the equation, oil and gas companies are just as flummoxed by the extent of the engagement they now have to undertake and the number of players they need to notify.”

He says interviews with stakeholders have also shown that the different sectors do not really understand the operational requirements and constraints of the other. This includes the potential impact on an individual business, fishing in a specific area, and on an industry sector basis.

There is also little consideration of the cumulative effects of multiple seismic operations. “Fishers may be able to contend with the impacts of a single seismic operation by modifying their activities, but there may be limited ability to do this in response to multiple operations conducted in a relatively small area in a short period of time,” he says.

Proposals to improve the engagement process include an annual regional stakeholder meeting and website to centralise and share relevant information between the industries, roundtable discussions on overarching policy and processes, as well as one-on-one industry discussions.

Ian Knuckey says several new protocols have been developed to help guide improved relations between the fishing and the petroleum industries, although these are yet to be tested.
Both of these FRDC-funded projects are expected to be completed this year.

The National Offshore Petroleum Safety and Environmental Management Authority (NOPSEMA) provides a notification service for applications related to seismic survey at its website.

Customised notification services for new submissions or changes to status in existing submissions can be made through NOPSEMA’s search tool.

This service is designed to ensure that anyone potentially affected by survey activity has the opportunity to comment, even if they may have been missed from the official notification list.

Several presentations at this year’s industry conference Seafood Directions in Perth from 25 to 27 October will feature the relationship between the fishing and the petroleum industries.