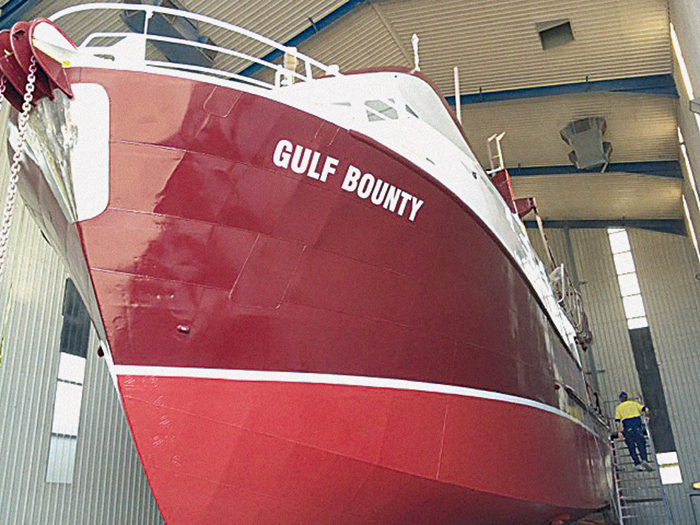 When the Gulf Bounty headed out into the Gulf of Carpentaria in April for the start of the 2015 Banana Prawn season, the refurbished trawler provided a test case for what seems destined to be a new era in the fishery.

The new refrigeration technology on board has increased processing speeds, increased freezer capacity, and keeps prawns in the best possible condition from the moment of harvest. It is a custom design and a demonstration of what is possible as the industry faces the challenge of finding new, environmentally acceptable refrigerants to keep freezers working safely and efficiently in difficult conditions.

For more than 40 years hydrochlorofluoro-carbon-22 (HCFC-22), or R-22 as it is widely known, has been the refrigerant responsible for keeping the catch in prime condition. But as a major ozone-depleting gas, R-22 has, for the most part, been phased out of refrigeration systems around the world in accordance with the 1987 Montreal Protocol to reduce the use of ozone-depleting gases. 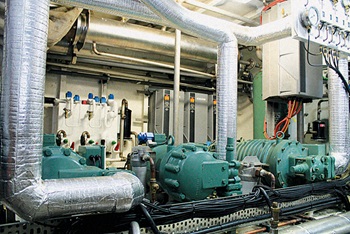 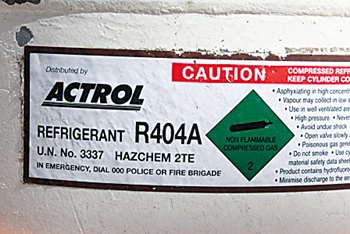 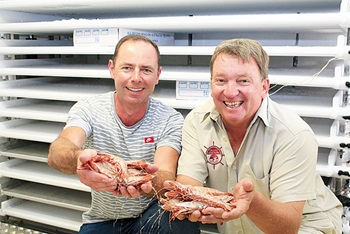 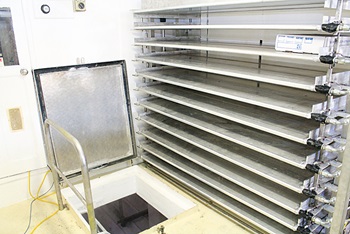 “They operate in the constrained space of a relatively small vessel, under heavy load, in high ambient temperatures,” he says. “The refrigeration is uniquely designed to snap freeze up to six tonnes of product at 28°C, down to –18°C in eight to 12 hours, with an on board holding capacity of 30 to 40 tonnes of prawns."

“This is all done on a moving vessel, subject to heavy vibration and exposed to corrosive salt spray and water,” he says.

Other complications in the Northern Prawn Fishery include long distances between fishing grounds and ports, and the limited ability of vessel engineers to maintain complex refrigeration systems in the event of breakdown.

Few gases come anywhere close to the performance of R-22 in these conditions. The most obvious choices are either toxic (ammonia) or explosive (propane); neither are a good fit on fishing vessels where refrigeration units share space with the main engine and generators, and the vessel is at sea for weeks at a time and a long way from help.

CEO of Austral Fisheries David Carter says the industry has been “stuck” for several years with no clear way forward on the refrigeration issue. R-22, while it is an ozone-depleting gas, has a mid-range global-warming potential.

The most likely alternative gases are not ozone depleting, but have high global-warming potential. The introduction of a carbon tax under the previous Australian Government made these gases extremely expensive, based on their potential carbon dioxide (CO2) emissions. A change in government policy has removed the carbon tax and put several alternatives back on the table, including R-404A and R-507A.

While their CO2 potential makes them a priority for phase out, possibly within the next decade, Peter Brodribb says the phase-out process will still take some time. These gases should continue to be available for the operational life span of a refrigeration system – 10 to 15 years – and provide scope for emerging alternatives to be explored and tested in existing R-404A systems. The refrigeration and safety performance of these gases most closely compare to R-22.

Refrigeration systems are expensive, $500,000 or more, and represent a major capital investment. Given that the systems on most vessels in the Northern Prawn Fishery fleet are at, or beyond, their design life, the move to new fitted vessels and new refrigeration systems will be a major generational change for the industry, David Carter says.

But it is a change they cannot afford to get wrong.

This is why Peter Brodribb and many others in the prawn industry are watching closely the performance results of the Gulf Bounty as the test case for a new refrigeration system, developed as a result of industry-led research into potential options.

The project was led by the Australian Seafood Cooperative Research Centre (Seafood CRC), following an FRDC-funded assessment of options to replace R-22.

Both the assessment of options and the design of the new refrigerant prototype fitted in the Gulf Bounty were undertaken by the Expert Group, along with operational benchmarks and design specifications for the new system.

The FRDC, Australian Council of Prawn Fisheries and the Western Australian Fishing Industry Council have also supported the project.

The Gulf Bounty was selected for refurbishment as the demonstration model through a competitive process. Its refrigeration systems were completely replaced, with two new freezers and a water-cooling system now using the refrigerant R-404A.

Managing director Mike O’Brien is enthusiastic about the new technologies incorporated within the refrigeration systems, as well as the performance of R-404A.

It has almost doubled the processing capacity of the Gulf Bounty, from four tonnes a day to more than seven tonnes. In the first few weeks of the season the Gulf Bounty was able to harvest and process 30 tonnes of Banana Prawns.

To accommodate the new gas, the refrigeration system had to be reconfigured to ensure the compressors, pumps and evaporators all worked efficiently under the harsh marine conditions. This has reduced the amount of refrigerant the system actually needs. It also includes the latest in automatic controls, computer monitoring, leak detection and remote fault diagnosis for vessels at sea.

A stand-alone chilled water system helps to reduce the ambient temperature of the prawns from 28°C to 30°C down to 2°C while they wait in hoppers to be processed.

Using a separate compressor for the chilled water system means it does not draw power from the freezers, and cooling the prawns first improves the efficiency of the freezers.

Mike O’Brien says the increased automation is also a great advantage, particularly given difficulties finding staff with the relevant engineering and refrigeration skills. “The automation makes it easier to operate, and the remote observation systems allow land-based contractors to ring into the boat’s system if there’s a problem, to help diagnose and fix it,” he says.

Tropic Ocean Prawns put more than $200,000 of its own money into the refurbishment of the Gulf Bounty. Along with funds provided through the Seafood CRC the total project cost was $675,000.
“Our local contractors, particularly Casco Refrigeration, also put in a lot of extra time to make sure it was all running smoothly,” Mike O’Brien says.

He plans to bring the rest of the company’s vessels up to the standard of the Gulf Bounty as quickly as possible, but recognises that some in the Northern Prawn Fishery fleet will want to stay with R-22, at least for the time being.

R-22 will become increasingly difficult to obtain in the coming years as no further imports into Australia are permitted. There is an estimated 9000 tonnes in the country in existing air conditioning and refrigeration systems that can be reclaimed and recycled as those systems are retired.

But at a cost of up to $160 per kilogram, re-gassing a boat could cost as much as $40,000. Preventing leaks will be crucial for those trying to extend the life of their existing systems.

Meanwhile, A Raptis & Sons Pty Ltd, based in Brisbane, is investigating the potential of a different gas as an R-22 replacement – R-438A. CEO Arthur Raptis says the trawler Arnhem Pearl will trial the new gas for the 2015 Tiger Prawn season.

He says while R-438A is more expensive per kilogram than R-404A, it is not as expensive to convert the existing refrigeration to accommodate the new gas. Concerns about longevity of R-404A have also led the company to investigate other options.

“The installation of the new gas has been relatively simple with some minor seal changes, and we expect R-438A will get cheaper as more people begin using it. It also has a better environmental footprint than R-404A.” He says trials on the Arnhem Pearl will test its performance during the next prawning season, with a particular focus on the snap freezers.

(Top) The refitted plant room on board the Gulf Bounty uses R-404A as its refrigerant, replacing R-22.
(Centre) Peter Brodribb from the Expert Group and Mike O’Brien on the Gulf Bounty, with prawns snap frozen in the new freezer system that uses R-404A.
(Bottom) The Gulf Bounty’s new snap freezer.

The industry-led project to design a standard-setting refrigeration system for the Northern Prawn Fishery using the new generation of refrigerants has won the 2015 Queensland Seafood Industry Award for research, development and extension.

Northern Prawn Fishery Industry CEO Annie Jarrett says it is great recognition for the benefits of research within the broader industry. The project is now a contender for the National Seafood Industry Awards to be announced at the biennial industry conference Seafood Directions in Perth in October.

She says the project generated groundbreaking technology, with a prototype design that meets the specific needs of the Northern Prawn Fishery, although this can be easily adapted to other tropical fishing vessels.

“The project aimed to develop a new technical standard and evaporator design, which will be owned by the industry and made available to other vessel operators and refrigeration contractors.”

Project partners including the FRDC and the Northern Prawn Fishery will make reports and manuals of the R-404A refrigeration prototype available to the broader industry over the next couple of months.