A decade of excellence in culinary connections

For consumers and chefs, connecting with primary producers is a growing trend, powered by media and TV shows such as MasterChef. But the FRDC has already been involved in taking chefs and hospitality staff to visit fishers and farmers for more than a decade, through the Appetite for Excellence program. 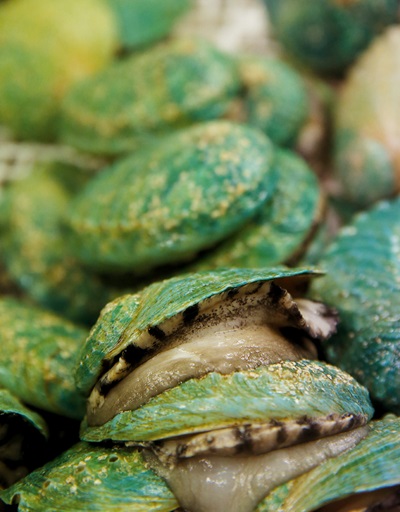 The program was created by chef Luke Mangan and his business partner Lucy Allon to encourage chefs and hospitality staff to stay in the industry. The FRDC was one of the founding product sponsors in the first year and took the bold step to have finalists visit fishers in a nominated region.

The concept was simple: take some of the best young chefs and show them how seafood was caught or grown and explain how science and best practice underpins Australia’s seafood and primary industries.

“When we asked on behalf of the chefs, we didn’t really expect the regional tour program to go very far,” says the FRDC’s manager of communications, trade and marketing, Peter Horvat. “But after discussions with other rural R&D corporations, the FRDC had three partners for the first tour in Tasmania – Horticulture Innovation Australia, Meat and Livestock Australia and Wine Australia.”

Now an annual event, over the course of a week-long tour, finalists in the Appetite for Excellence program visit four or five primary sectors to learn about where the produce comes from, firsthand. Other partners have included Dairy Australia and Australian Pork.

In the past decade, the regional tour program has visited many seafood companies including crab and fin fishers in Carnarvon (Western Australia), tuna, kingfish, mussel and oyster producers and processors in Port Lincoln and Adelaide (South Australia). 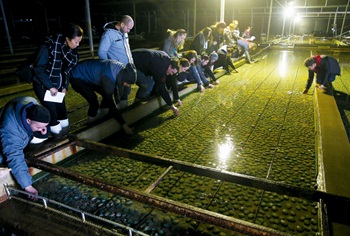 After visiting the Jade Tiger Abalone farm in Portarlington, Victoria, to learn about the production process and to taste test the abalone, the Appetite for Excellence finalists were keen to learn where they could get hold of more product to use in their restaurants.

There were abalone farms, fishers and processors in Geelong (Victoria), and commercial co-operatives and long liners in Bermagui (New South Wales).

This year the finalists toured Victoria starting in the Ballarat gold fields and moving south to Geelong where seafood visits focused on fishing in Port Phillip Bay with the Jenkins family and the Jade Tiger Abalone farm. 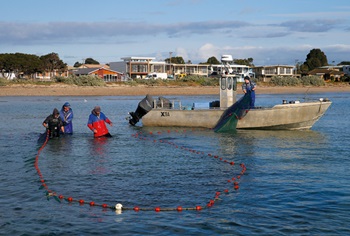 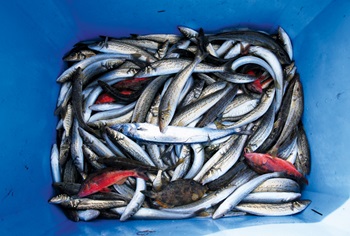 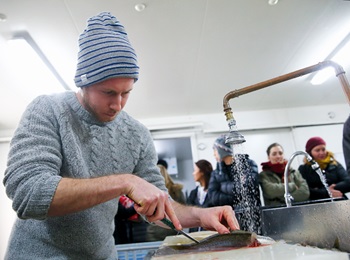 The tour participants were able to closely observe shallow water haul seine fishing, a low-impact harvesting technique used in Port Phillip Bay to catch many popular species such as King George Whiting. They were also able to compare their own fish filleting technique against that of the professional filleters, who process the catch for Jenkins and Son.
Photos: Don Arnold

After a 7am start at Queenscliff marina, the group spent three hours on Port Phillip Bay with the crew from Jenkins and Son, who demonstrated how shallow water haul seining works. This is a low-impact method of harvesting that allows the catch to be sorted in the net before it is brought out of the water.

The Jenkins family has been operating in Port Phillip Bay for five generations. The key species they target include King George Whiting, Snapper, Flathead, Red Mullet and squid.

Tour participants were able to observe the fishing from only metres away – on board the Geelong-based Eco Tours boat. Fishing on the day produced a good haul of about 200 kilograms of King George Whiting. The FRDC’s Josh Fielding says the group members were able to see that the fish not targeted were released in a healthy condition.

Johnathon Davey agrees it was a great opportunity to show some of the hospitality industry’s best young people how sustainable the practice of haul seining is. “They were all able to see how the seafood they use does come from an environmentally friendly commercial fishing industry. It’s an industry where the operators are custodians of the environment,” he says.

Donna, Peter and Ben Jenkins opened their shop in Portarlington, allowing the group to witness how seafood was processed, highlighting the deft skills of professional fish filleting. Several of the young chefs tried their hand to improve their skills.

Peter Jenkins and Johnathon Davey gave an outline of the issues the Port Phillip Bay fishery is facing in relation to the Victorian Government’s election commitment to close the bay to commercial fishing.

Members of the tour were keen to understand the issue and to learn how they could help in this case or with similar issues around Australia.

“It would great to have the opportunity to provide a similar experience to future groups of not only chefs but also other young leaders,” Jonathon Davey says. “It could be a good case study to inform the National Seafood Industry Leadership Program, and the experience it provided and how it could be incorporated into other programs.”

Continuing the tour, the finalists spent the afternoon visiting the Craig Mostyn Group’s Jade Tiger Abalone farm, also at Portarlington. Managing director Anton Krsinich was the host for the afternoon and gave an overview of the operation from spawning and spat production right along the supply chain to processing, canning, packaging and exporting.

This land-based facility is the largest abalone farm in Australia and produces a selectively bred abalone with a distinctive jade colour.

At the end of the tour the group was treated to a tasting of abalone in a few different forms – canned and fresh. For many in the group this was the first time they had tried abalone and they were not disappointed.

As with the tour provided by Jenkins and Son in the morning, participants were keen to know where they could secure supplies from Jade Tiger Abalone.

“It was clear that participants loved being able to hear the stories of the fisheries, and to understand the background of the seafood they work with,” Josh Fielding says.

After 10 years of involvement in Appetite for Excellence the FRDC has helped to educate almost 200 leading hospitality professionals, and has built long-lasting partnerships and a network of good people who continue to use the FRDC as a resource for information on the seafood industry.