For the past three years, scientists have spent thousands of hours trying to catch and better understand these riverine and estuarine shark species and sawfish (which are technically rays, close relatives of sharks).

This research has been carried out through the National Environmental Research Program’s (NERP) Marine Biodiversity HubandNorthern Australian Hub. 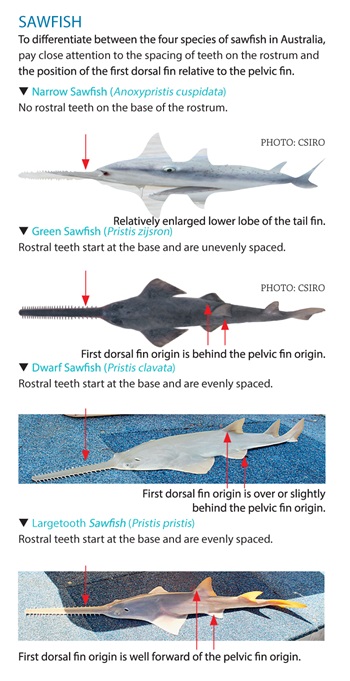 Surveys and tagging have focused on the Alligator Rivers region of Kakadu National Park, in the Northern Territory, and the Adelaide River, east of Darwin. Remoteness, wild monsoonal weather and high densities of estuarine crocodiles have challenged researchers who have been recording relevant information, taking DNA samples and tagging animals.

Peter Kyne from Charles Darwin University, who is leading the NERP project, says close to 600 river sharks and 70 sawfish have been caught, tagged and released back into the Van Diemen Gulf’s major river systems.

“Until now, very little has been known about the population size and status of sawfish, Speartooth and Northern River Sharks. This has made effective management difficult,” Peter Kyne says.

DNA samples are being used to build a better picture of population structure, sizes and trends, while acoustic tags are used to monitor species’ movements and habitat use in and between rivers and estuaries.

Mark Bravington, from project partner CSIRO, is leading the application of novel genetic techniques – close-kin mark-recapture – to determine population sizes and trends.
“If we find a lot of closely related individuals, such as half-siblings, it tells us that there are not many breeding adults and the population must be fairly small,” Mark Bravington says.

“Another thing we look for is whether sharks from one river system move to adjacent rivers to breed, or whether each river contains a separate population of sharks with little movement in-between.

“This has important management implications – for example, if each river carries its own unique population, then conservation plans also need to be individualised.”

The research has already delivered promising results. For example, until recently, the Northern River Shark was considered one of the rarest sharks in the world. But to date, the team has caught more than 350 individuals and now knows the Alligator Rivers region supports the most significant known population of this endangered species in the world.

In August 2014, the researchers also recorded a Speartooth Shark for the first time in the Wildman River and have documented new locations of Northern River Sharks.

A preliminary population estimate for the Speartooth Shark in northern Australia, based on the close-kin mark-recapture approach, will be available later in 2015.

“Thanks to improvements in genetics, we can now find half-siblings as well as parent–offspring pairs, which means we can work with a much wider range of species in the future.”

Peter Kyne says monitoring will help to determine whether existing management strategies are effective and what plans might be required to ensure the survival of these species. “As the desire to develop northern Australia grows, we must keep biodiversity values at the forefront of these discussions,” he says.

River sharks and sawfish continue to come under threat from habitat degradation and are at risk of becoming bycatch in commercial and recreational fishing. The long-toothed rostrum of sawfish makes them particularly vulnerable to entanglement in fishing nets.

“This isn’t intentional,” Peter Kyne says. “But they do become caught in nets in commercial fisheries that are targeting fish such as Barramundi, which occupy the same habitat.”

While this research will help form the building blocks of future conservation strategies, providing information to local communities, commercial fishers and recreational fishers is also seen as crucial to protect these
vulnerable species.

The project ‘Supporting Management of Listed and Rare Species’ runs until mid-2015. It has been a joint initiative between the Marine Biodiversity Hub and the Northern Australia Hub of NERP, and is a partnership between CSIRO, the NT Department of Primary Industry and Fisheries and Charles Darwin University. Additional support is provided by Kakadu National Park.

Commercial fishers who incidentally interact with river sharks and sawfishes as bycatch are required to record these interactions in a logbook. Researchers are also keen to receive reports of any encounters, including information about the location of the sighting or capture, the date, size and photographs to better understand the population dynamics of these species. These species do look similar in many ways – but they have several distinctive identifying features.

Fishers or community members who experience a close encounter with one of Australia’s sawfish or river shark species are meeting with some of the rarest inhabitants of our northern waterways.

Such an encounter is not without its dangers, as the species are all well-equipped with features designed to inflict injury, as the researchers involved in efforts to tag and monitor these species can attest.

However, Pristis sawfish and river sharks are protected species under the Commonwealth Environment Protection and Biodiversity Conservation Act 1999, as well as state/territory fisheries or conservation legislation (see Table 1), and are required to be released when accidentally caught.

Simple measures can help the survival of animals accidently caught, while reducing the risk of injury to fishers. These measure are outlined in the publication Protocols for surveying and tagging sawfishes and river sharks, produced as part of the National Environmental Research Program (NERP) project, available on the NERP website.

“These are potentially dangerous species,” researcher Peter Kyne says. “No one wants to come into contact with the sharp rostrum of a sawfish or the mouth of a shark, so a firm grip should be kept on the animals at all times.”

Measures to improve the survival of released animals include limiting the time they are handled and exposed to the sun, removing fishing line and hooks wherever possible and placing them into the water for release rather than throwing them.

Report a sighting to: peter.kyne@cdu.edu.au