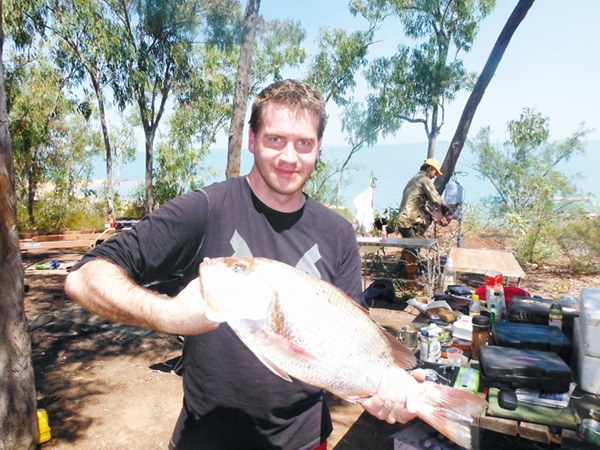 Matt Osborne at the Baniyala campground with a Golden Snapper during his Northern Territory regional visit.
Photo: NT Fisheries

For Matt Osborne, a member of the Kaurna and the Narungga people of South Australia, the ocean is very much a part of his cultural heritage. This includes learning and practising customary fishing techniques that target many different species.

Some of the species highly prized for cultural significance are also well-recognised commercial species – for instance, abalone and Southern Rock Lobster. Others, such as the Dusky Morwong, have little value to either commercial or recreational fishers.

Matt Osborne also knows, as do many other Indigenous Australians, what it is like to be restricted or legally prevented from carrying out the traditional practices of his people.

He says this is beginning to change slowly, with many jurisdictions around Australia now providing for and protecting Indigenous access to fisheries. However, there remains a gap in many cases between legislation and initiatives on the ground.

It is a gap Matt Osborne hopes he can help to address by supporting efforts to encourage greater Aboriginal and Torres Strait Islander participation in fisheries – not only in preserving traditional fishing practices and cultural knowledge but also in commercial and recreational fishing and fisheries management.

Working with Rural Solutions SA, the service-delivery arm of Primary Industries and Regions South Australia, he has been involved in several projects aimed at expanding Indigenous participation. This includes a feasibility study for abalone aquaculture as an Aboriginal business initiative.

In the past two years, Matt Osborne has built his skills and expanded his networks through the National Seafood Industry Leadership Program (NSILP). He also received an FRDC-sponsored Indigenous Development Scholarship, which has allowed him to learn more about Indigenous initiatives in fisheries management, commercial operations and traditional practices in other parts of the country.

Matt Osborne says NSILP provided him with a broader understanding of the fishing industry as a whole, and where Aboriginal fishing could be more supported.

“The program brought together participants from a lot of different industry sectors. We didn’t necessarily know a lot about the aspirations of the different sectors when we started. To be able to provide an Aboriginal perspective in that forum was good, and it would be good to see more of that – to be recognised as important stakeholders in the fishing industry.”

The Indigenous Development Scholarship allowed him to travel to the Northern Territory, Queensland, Western Australia and the Torres Strait Islands, speaking with both fisheries managers and Indigenous community representatives.

During a NT visit, Matt Osborne was particularly impressed with the involvement of Yirralka rangers in both fisheries management and compliance. The rangers help manage the Laynhapuy Indigenous Protected Area, which covers 4500 square kilometres of coastal vegetation, heathlands, mangroves, flood plains and wetlands.

“It was good to see how traditional owners were respected and supported to take charge and provide advice about what is happening in the area, and where the commercial fishers are,” he says.

As well as being authorised to conduct compliance activities, such as checking for commercial crabbing equipment, he says Indigenous people had a substantial influence in defining compliance operations to manage and protect their Sea Country.

It provides a good example of a mutual benefits approach to Indigenous fisheries, he says. Indigenous knowledge and participation assist government agencies to manage the long-term sustainability of the fisheries for the benefit of the entire community.

Matt Osborne is now a member of the FRDC’s Indigenous Reference Group, which works to define fisheries-related aspirations of Indigenous Australians and relevant research, development and extension activities needed to support these. With a Bachelor of Science in marine biology, he also brings experience in the practical delivery of government policy and projects.

In addressing the gaps between legislated rights and policy, he has already been involved in testing fisheries’ social objectives and indicators with the Narungga community of SA and the SA Sea Ranger forum.

Representing the Indigenous Reference Group, he also presented at a national ecosystem-based fisheries management (EBFM) workshop in 2014. He says while EBFM is seen as a best-practice management framework, it often fails to incorporate the objectives of Indigenous communities.

For example, maximum economic yield and allocation are often used as proxies for social objectives. But customary fishing is not recognised for economic gain, and economic objectives do not recognise the social value of cultural practices.

Matt Osborne says the FRDC’s investment in Indigenous research provides strong recognition of the significance of the sector.

“I believe it will lead to further changes to fisheries management and Indigenous participation across Australia,” he says. “Other sectors of the fishing community will also benefit from recognition of Indigenous fisheries through improved decisions and a true triple-bottom-line approach that meaningfully incorporates all users.”