By Gio Braidotti
Global seafood demand is on a dramatic growth trajectory and it is creating unprecedented opportunities for aquaculture, particularly for companies that can solve issues around quality, environmental sustainability and the increasing cost of feed.

In Australia, the publicly listed company Seafarms Group has anticipated the market dynamics and responded with an ambitious aquaculture plan – Project Sea Dragon – that could catapult Australia into the world’s top-10 producers of the planet’s second most popular prawn species – the Black Tiger Prawn (Penaeus monodon).

“This will be an export-oriented business based on a global scale, with an integrated production system,” Chris Mitchell says. “That means operating our own hatcheries, broodstock facilities, grow-out ponds, feed mills, power stations, and processing, storage and export facilities.”

The plan for production starts with 10,000 tonnes of prawns annually from a 1000-hectare operation base in the Northern Territory, with the first prawns projected to enter ponds in 2018.

From that base, the company intends to expand to 10,000 hectares producing 100,000 tonnes a year. This is on par with total prawn production by Brazil or Bangladesh (Figure 1). 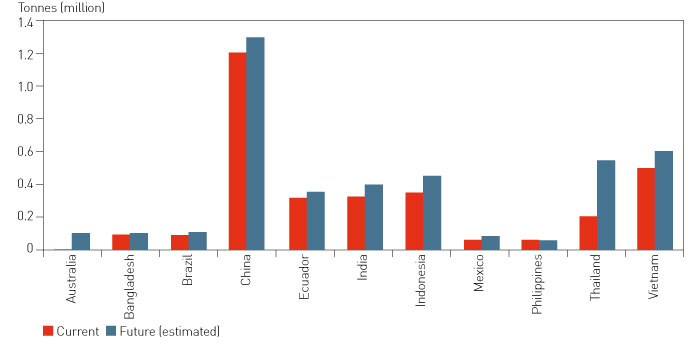 The scale of Project Sea Dragon was described to ABC Rural News by the NT Minister for Primary Industry and Fisheries, Willem Westra van Holthe, as “mind-boggling” but achievable, given recent changes to the NT Pastoral Lands Act.

These seek to encourage diversification of the NT’s pastoral leases.

This is precisely what Seafarms will achieve as the company plans to convert part of a cattle station, Legune Station, to an aquaculture operation. The site is located on the Western Australia/NT border, near Kununurra, inland from the intertidal zone but with access to estuarine water.

The company is in the early stages of a 21-month process to obtain approvals for the development. This includes input from Indigenous landholders, an environmental impact study and obtaining a land tenure agreement with the NT Government.

In parallel, Seafarms is undertaking a feasibility study that allows it to rigorously analyse and finalise plans for the development’s design, engineering and budget.

“This is not a government development, but we will talk to them about public infrastructure as the project will produce economic activity in the region, including the creation of 1600 ongoing jobs and a lot of flow-on employment,” Chris Mitchell says.

The aquaculture operation system has been piloted and improved at Seafarms’ existing prawn ponds in Queensland, which currently produce about a quarter of Australia’s total pond production of Banana Prawns and Black Tiger Prawns (about 1000 tonnes in 2014 and increasing to 1500 tonnes once production is in full swing).

These are marketed in Australia as Crystal Bay Prawns. An international management team was recruited to scale up operations for Project Sea Dragon.

“We have done a lot of preparation and analysis so that when we are ready for the larger project we have systems and processes in place,” Chris Mitchell says. “We also have a vested interest in R&D. Our position is that we can improve with science, particularly in the areas of breeding, improved feed and intelligent IT systems.”

Seafarms is the commercial partner within the Australian Research Council Hub for Advanced Prawn Breeding along with James Cook University, CSIRO and the University of Sydney.

“Our research partners are using modern genetic technology to map the entire genome of the Black Tiger Prawn,” Chris Mitchell says. “We can use that knowledge to refine breeding values and then accelerate breeding cycles with the use of genotypic selection.”

The company also has an overarching agreement with CSIRO related to improving aquaculture feed and R&D opportunities more generally. Notably, CSIRO is the key research organisation involved in developing novel aquaculture feed technologies (such as NovacqTM, see 'Giant potential for prawn farming') that can cheaply and sustainably make feeds that are essential to aquaculture’s growth into the future.