Transporting live fish across Australia and the world has never been an easy task, but Australian innovation is now transforming the live fish trade. Traditionally, fingerlings and fish have been kept alive by packing them in water-filled plastic bags, placed into polystyrene boxes for transport.

The longer the journey, the more water is required to provide enough dissolved oxygen gas for the fish for the duration of the trip. For longer trips, including international flights, this can involve transporting more water than fish. 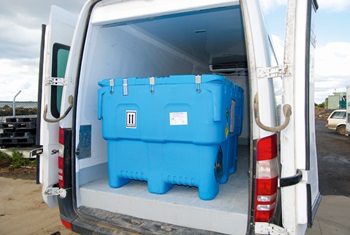 Large numbers of fish can be moved in a single container, which uses a constant ow of pressurised oxygen to the keep them alive and healthy during the trip.

In the late 1990s, Melbourne-based engineer John Curtain re-imagined this process: What if you could continuously add oxygen gas to the water throughout the journey?

Today he is managing director of FishPac, which provides the world’s only approved live seafood system that uses added oxygen gas to sustain the seafood being transported by both land and air. The system will keep up to 500 kilograms of fish alive for 25 hours or more.

The FishPac StacPac system uses cylinders of up to 4100 litres of pressurised oxygen gas. Given the sensitivities of aircraft operators and pressurised gas, gaining air freight approval from the Civil Aviation Safety Authority (CASA) and the International Air Transport Authority has been a major achievement and has taken many years of close consultation, testing and review.

In the FishPac system, the oxygen gas flows through a purpose-designed, patented and approved regulator at approximately three litres per minute into a StacPac bin, which looks like a large blue plastic spa.

FishPac general manager Gavin Hodgins says the system was adopted very quickly for Coral Trout and grouper from Cairns and Brisbane, with the first commercial shipments starting in mid-2000.

“Since that time, FishPac has had an exceptional success rate without a single mechanical failure and constant delivery of grouper to Hong Kong and Los Angeles with a zero to one per cent mortality,” Gavin Hodgins says.

The FishPac containers are continuously re-used, unlike the polystyrene boxes commonly used for live fish transport, which are easily damaged and often leak. Polystyrene can be difficult to dispose of and if the foam is burnt releases toxic fumes.

Max Cullen of Queensland-based fish and seafood exporter Omni Export says that the FishPac StacPac system is a boon for aquaculture. “Not only does it deliver better quality and healthier fish but using the new system also reduces manpower.

“I think the fish mortality rate was as high as 10 per cent before the StacPac system was introduced.”

CASA assisted with the product development to facilitate Australia’s aquaculture trade. CASA approval is required for the carriage and consignment of operational oxygenation systems for transporting live aquatic animals and this involves a series of tests including a stack test, tilt test, drop test, temperature test, and oxygen quantity and flow tests.

CASA was successful in having the International Civil Aviation Organization Technical Instructions for the Safe Transport of Dangerous Goods by Air amended in 1999 for a rule change to allow the air transportation of live aquatic animals using compressed oxygen gas. This has allowed the legal transport of oxygenation systems such as the FishPac system.

Gavin Hodgins says FishPac offers substantial benefits for live fish freight. “Not only are we providing a better-quality product at the port of destination, which results in happier customers, we have increased payloads versus old systems by more than 35 per cent on average, while reducing mortality and wastage.”