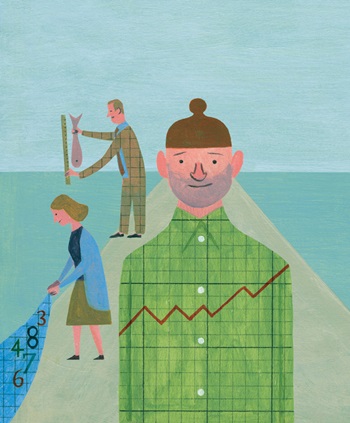 Maximising the returns from Australia’s fisheries for the nation is far more than a matter of maintaining the biological sustainability of fish stocks. But for fisheries managers with a background in biological sciences, it can be difficult to know how to go about the new management paradigm of “fisheries bio-economics”.

Bio-economics is essentially the process of combining biological information about fisheries with economic information in order to make management decisions. For example: how will changing the legal size limit of a fish affect the sustainability of the species, and how will it affect the productivity and profitability of fishers?

Providing new economic perspectives and skills was the aim of a workshop for fisheries managers held in Queenscliff, Victoria, in February. The workshop was coordinated by the University of Tasmania (UTAS), which has several researchers working on economics-related projects.

The workshop drew together managers and researchers from all Australian states and New Zealand to discuss common economic management strategies, such as quotas, and the use of economic indicators, which range from employment figures to the cost of going fishing and the beach price for fish.

Among the presenters was Caleb Gardner, from the Institute for Marine and Antarctic Studies (IMAS) at UTAS, who has undertaken several economic assessments including an analysis of potential benefits from the relocation of Southern Rock Lobsters in the Tasmanian fishery.

He said while fisheries management in Australia was initially based on the rationale of providing food for domestic markets, exports now provide the greatest value for Australian fisheries.

“As managers of a commonly owned resource, we need to make sure that commercial industries can operate as productively as possible, while also protecting the sustainability of the resource and benefits to other users.

“Fisheries managers need to step up to maximise community benefits and create economic opportunities for local communities, for the states and for the nation. Creating economic benefits is already enshrined in fisheries legislation in all jurisdictions and we need to get smarter about how we do this.”

UTAS research scientist Tim Emery conducted a national survey of fisheries managers prior to the Queenscliff workshop. He found that more than 60 per cent of managers had a background in biological sciences and limited working knowledge of fisheries economics methods and concepts.

However, more than 80 per cent of respondents said they were expected to be familiar with economic theory; more than 70 per cent agreed that education and training in bio-economics was necessary to improve their management capabilities.

However, about 75 per cent reported opposition from the commercial fisheries sector to measures designed to improve economic yield and cited resistance to revolutionary change, scepticism and suspicion about future financial wellbeing.

At the workshop Tim Emery reported on the survey findings, which included that only half of Australian fisheries organisations actually collected and used economic data.

Caleb Gardner also outlined some of the responsibilities of fisheries managers at the workshop, saying that while many decisions in Australian fisheries were driven by biological information, managers were also required to generate and sustain triple-bottom-line benefits. This means they must consider ecological, economic and social sustainability from fish-capture stage to market.

“The focus in Australia is largely on preventing fishery collapse, which is necessary, but is only one aspect of management of a fishery. Economic methods are useful in situations where choices need to be made and this is broader than just commercial profitability,” he said.

“The economic benefits are not solely related to commercial fisheries, and managers need to keep other stakeholders in mind.

The case for quota

The workshop discussed quota-managed fisheries as one potential economic management strategy – one which is designed to maximise the economic yield or value of the fishery. The economic theory behind quota fisheries holds that by giving fishers quota units, it encourages them to make decisions that improve the economic performance of fisheries.

IMAS PhD candidate Rafael León reported on his analysis of decision-making in quota-managed fisheries, finding that the operational reality often contradicted the economic theory. The theory suggests, in part, that in quota systems the aims of industry and government – sustainable stocks and maximum returns – will align.

One expected result of this is that setting the total allowable catch becomes a more harmonious process because the economic incentives of maintaining long-term economic yield and a sustainable fishery encourage quota owners to voluntarily reduce their take in response to declines in abundance or catch rate.

However, Rafael León said his study of Australian and New Zealand fisheries quota owners showed that they did not necessarily demonstrate stewardship in this way, and failed to reduce their take in response to periods of declining stock abundance. There was often continued pressure from industry to maintain the highest possible quota, so that setting a “profit-maximising and conservative total allowable catch” did not always occur in quota-managed fisheries.

“Many people believe that providing quota owners with an economic incentive to set conservative catches means economic targets will be easy to achieve. But in practice, many of the fisheries [studied] failed to target higher economic yield despite being managed under quota,” he said.

Rafael León said several factors explained this behaviour, the most pervasive being a poor understanding of the rationale of individual transferable quota systems.

“More needs to be done to increase economic yield beyond just providing quota ownership, for example using bio-economic analyses and economic targets.” This could mean setting a catch rate that correlates with maximum economic yield as the target catch rate for the fishery.

Adding to Rafael León’s presentation, Caleb Gardner said, legally, quota owners hold usage rights, not property rights. “Unlike farming, the oceans are a community resource and the legislation is clear, across jurisdictions, that the government’s role is more than just sustainability. In some cases this is explicit,” he told the workshop.

He said it had often been difficult for fisheries managers to argue with industry to increase long-term profitability – as opposed to maintaining biological sustainability. There were often conflicting views between fisheries managers and industry on issues such as setting total catch or size limits.

In the past, this has meant that managers might not challenge industry in this arena, which had resulted in missed opportunities for the wider community.

“We have to ask what economic benefits we want from the fishery and whether this is about maximising economic benefit across all [sectors] or whether that conflicts with sustainability benefits. We have to confront the issue of winners, losers and trade-offs. Being clear about who we want to benefit is important for selecting performance indicators and targets for the fishery.”

He said that to manage stocks for the benefit of consumers suggested targeting maximum sustainable yield and food production (more fish and cheaper prices).

Emily Ogier, a fisheries social sciences researcher at IMAS, also reported at the workshop on her research into public policy drivers and how public values influence management objectives for marine resources.

She said economic approaches and theory could help to allocate access between commercial, recreational and conservational uses. They could make the trade-offs between sectors clear, as well as measuring the success (or otherwise) of the management objectives and the trade-offs.

Optimising economic benefits to the broader Australian community was a widely held objective for most Australian fisheries, and this required management for a broad set of economic interests including, but not limited to, the viability of the commercial seafood industry.

“Other economic objectives include maximising the use and benefits from the fishery, encompassing recreational and Indigenous fisheries,” Emily Ogier said. The links between legislation, policy and management decisions needed to be clearer and more explicit, and bio-economic analysis and targets could help with this, she said.

The workshop also discussed the development of harvest strategies, which most Australian fisheries are now using. In its simplest form, a harvest strategy provides a framework to ensure that fishery managers, fishers and key stakeholders agree on how they will respond to various fishery conditions, both good and bad, before those conditions occur.

New National Guidelines to Develop Fishery Harvest Strategies, released in 2014 and backed by the FRDC, have set a clear direction and a consistent, more harmonised approach to harvest strategy development that can be applied across all fisheries management jurisdictions.

Caleb Gardner helped to develop the guidelines and told the workshop that harvest strategies would substantially increase the number of specific targets managers set for their fisheries management, including economic targets, which typically include objectives such as increasing maximum economic yield.

The new guidelines are voluntary, but are supported by the Australian Fisheries Management Forum as a best-practice approach to fisheries management decision-making. The guidelines provide increased certainty and transparency in harvest strategies.

This, in turn, is expected to foster trust between stakeholders, allowing fishery managers and fishers to operate with greater confidence, and support more objective, efficient and proactive decision-making.

The former chief economist for the New Zealand Ministry of Fisheries, Ralph Townsend, was among the presenters at the recent bio-economics workshop held in Queenscliff, Victoria. He spoke about New Zealand’s experiences with recreational and commercial fishing resources sharing.

Now Dean of the College of Liberal Arts of Winona State University in the US, Ralph Townsend said economics had successfully established trade-offs in New Zealand’s fisheries, such as between different species in a multi-species commercial fishery and also with recreational fisheries.

Caleb Gardner, from the Institute for Marine and Antarctic Studies at the University of Tasmania, said the same approach could be applied in Australia. “By using economic data to measure the value of fish caught for the commercial sector and using tools to put a dollar value on enjoyment, fisheries managers can compare recreational with commercial values,” he said.

He said contingent valuation methods had been easily incorporated into existing recreational surveys, asking recreational fishers how much they were prepared to pay for an extra day fishing then equating that with other recreational activities.

“We can use that information to set bag limits that maximise the enjoyment rather than the profit of the recreational fishery,” he said.

“Objectives for the recreational and commercial fisheries are different but both can be examined economically.”

National Guidelines to Develop Fishery Harvest Strategies is available on the FRDC website.