Back from the brink

It takes a rare combination of factors for a restocking program to work and be successful including long-term commitment and breeding know-how; popular appeal also helps 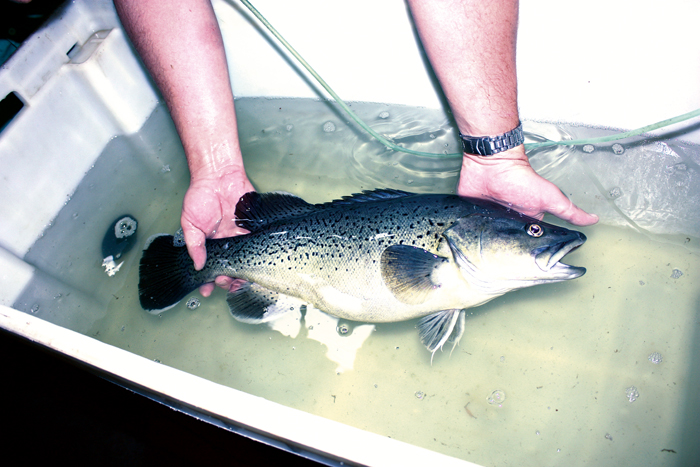 The tale of the Trout Cod (Maccullochella macquariensis), a native of the southern Murray–Darling Basin, is one that highlights the potential of fish culture and restocking to conserve and rebuild populations of threatened species.

Once a popular recreational fish, by the 1970s it had been in severe decline for decades; there was only a single naturally occurring population remaining – between Yarrawonga and Echuca, on the Murray River.

These days the endangered and protected Trout Cod can be found in numerous rivers in New South Wales, the Australian Capital Territory and Victoria. This recovery is largely due to an extensive and ongoing conservation restocking program. Since the mid-1980s more than 1.5 million cultured Trout Cod have been released in NSW, ACT and Victoria combined.

Despite the small, remnant population that broodstock were captured from, the releases of hatchery-reared fingerlings have not negatively affected the genetics of the wild population and Trout Cod is widely considered one of Australia’s greatest successes in conservation restocking.

As principal research scientist with NSW Fisheries for more than 30 years, Stuart Rowland (now retired) saw firsthand just how dire the situation had become for Trout Cod and other large-bodied native species in Australia.

In response to the general decline of native fish, the NSW Department of Fisheries began research in the 1970s to develop hatchery techniques for these few key species, to re-establish their stocks, increase their abundance and distribution and provide for recreational fisheries. Stuart Rowland led the initial research at the Narrandera Fisheries Centre and then later at the Grafton Primary Industries Institute.
After 30 years of conservation restocking, many of these large-bodied native species have returned to their former distribution and established self-sustaining populations.

“We found that most stockings were really successful and have basically brought those key threatened species back from the brink of extinction,” Stuart Rowland says. 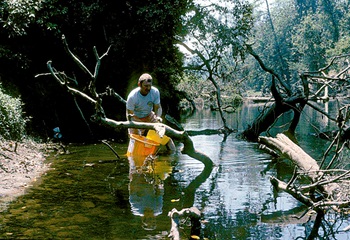 While these programs have been successful, other programs have not had the same results. Every failure and success has helped to improve future programs, with more rigorous breeding protocols and new technologies to help address critical issues such as genetic and domestication effects of hatchery programs.

In 2004, NSW Fisheries introduced a Hatchery Quality Assurance Program (HQAP) to set the standard for responsible conservation restocking practices and address such issues.

Guidelines for breeding programs seek to maintain the genetic identity of stocked populations, maximise genetic diversity and minimise inbreeding in cultured fish. A failure to do so can reduce survival and fitness, and the ability of the cultured (and ultimately wild) populations to adapt to changing environments.

‘Domestication effects’, such as failure to recognise the need to seek refuge from predators or preference for artificial foods, are now prevented by introducing simulated predators in the hatchery and using live prey diets.

Stuart Rowland says Australia has a great track record in conserving threatened species and our practices are world-class.

“The HQAP set a standard for both government and commercial hatcheries that was based on years of research and practical experience.”

On average, his team requires three to five years to close a species life cycle, from wild broodstock collection to hatchery production of juveniles. He argues we need to start this process for our vulnerable species sooner rather than later.

“It would be far better to do the hatchery groundwork now and either save them from being listed, or if they do get listed we’ve already got a really good production system in place before they disappear from the wild.”

He says that the population continued to decline during the five or so years it took to investigate the biology, genetics and threats to the species (key elements critics say need to be established prior to stocking). By the time his team was allowed to collect broodstock to commence a breeding program in 2006 it was very difficult to find any.

“That project highlighted the detriment of doing nothing aside from monitoring the decline of a species,” Craig Lawrence says. “So if you have a declining population and you do nothing but monitor it, because you are too cautious to take any action such as commencing a conservation restocking program, you will probably lose it anyway.”

“Conservation stockings in NSW are ideally undertaken for three to five consecutive years in a particular river or location with the aim of establishing breeding, self-maintaining populations; stocking then ceases and the recovery is monitored,” Stuart Rowland says. “Whereas stock enhancement involves regular stocking into environments where the species does not breed and/or recruit successfully, like in impoundments.”

Conservation restocking is only one tool in a larger toolkit of management options; it is not a cure-all for threatened fish stocks. While returning fish to an area is an important early step, addressing the causes of decline is still necessary for recovery.

However, in emphasising the importance of the initial conservation stockings Stuart Rowland makes the point that undertaking initiatives such as fishing management including severe restrictions, habitat restoration and general environmental improvements are of limited value if the target species is absent or no longer present in sufficient numbers to breed.

Best hatchery practices for conservation restocking help to optimise success, but there are still hurdles outside the hatchery process to be overcome. Unlike Trout Cod, not all threatened fishes have the benefit of being high-profile, former recreational species with enough community and political momentum to support 30-year-long restocking programs.

Another factor contributing to the lack of success of some programs is the small scale of releases and the short-term nature of programs designed, for example, to overcome immediate threats such as drought.

Mark Lintermans, from the University of Canberra, is widely published on the subject of native fish conservation and says the lack of resources for restocking in Australia is a major impediment to success with some species.

“Governments or agencies generally work on political or funding time frames rather than ecological ones,” he says. “That lack of ability to sustain long-term programs is a real problem. The scale of the reintroductions is often too small, and by that I mean both the number of fish we release and the number of years we release them for.”

There are few facilities with even fewer resources capable of undertaking captive breeding for conservation, Mark Lintermans says. This limits the ability to produce the numbers necessary for successful restocking.

“You need to ensure that at least some of your stockings encounter favourable environmental conditions. There are good years and bad years in a river and if you only stock for a couple of years then the chances are you might have stocked in two bad years.”

Situations where projects have been successful, such as Trout Cod stocking in the Ovens River in Victoria, have been long term. The 10-year project found released populations were dominated by only a few strong year classes that had encountered favourable conditions and survived to breed.

“When it comes to species recovery, it is a very long road we’re on here and there are no quick fixes,” Mark Lintermans says.