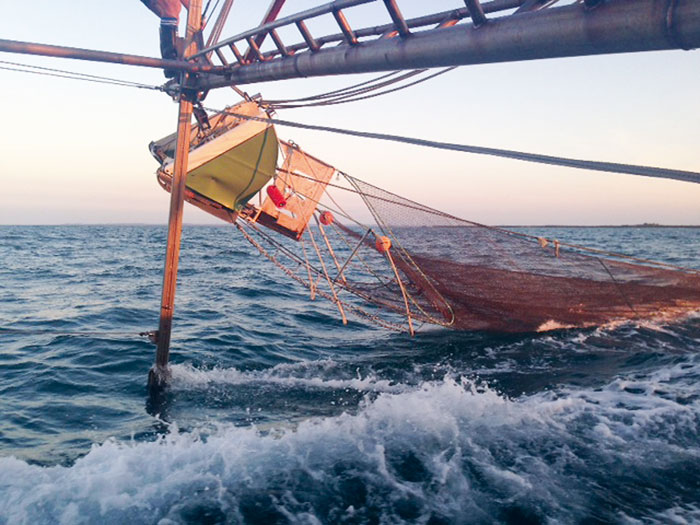 By Nicole Baxter
Prawn fishers around Australia are expected to benefit from research to improve the fuel efficiency of trawling operations, helping them to better withstand the long-term fluctuations in diesel prices.

Cheslav Balash, a research fellow from the Australian Maritime College (AMC) at the University of Tasmania, says fuel accounts for up to 50 per cent of prawn fishers’ operating costs.

His co-researcher and former prawn fisher David Sterling, of Sterling Trawl Gear Services, estimates small trawlers use about 500 litres of fuel a night. Larger trawlers, such as those used in Australia’s Northern Prawn Fishery, can burn upwards of 2000 litres a night.

According to David Sterling, prawn trawlers use 60 to 70 per cent of their onboard fuel actively fishing. To reduce fuel use, fishers need to reduce the drag of their gear as it moves through the water so trawling can be done without having to push the throttle as hard.

In one laboratory-based trial they compared the drag potential of four commercially available nets with standard 24-ply polyethylene (PE). The results of the trial, done in the AMC’s flume (test) tank, showed that high strength nets made from thinner twine result in less drag (Table 1).

Sea trials were then done to test the performance of five different nets over five days using a 15-metre commercial trawler with a twin rig configuration. Five trawls were made with each net type: 24-ply PE, Hampidjan Dynex, Ultracross Dyneema, Euroline Premium Plus and Spectra.

During the test trawls one of three different sized kilfoil trawl boards, also called otter boards, was selected randomly for each trawl.

The best fuel-saving performance, as identified by reduced drag for a given speed and net spread, was 22 per cent, using the Ultracross Dyneema and Spectra nets, matched with the smallest-sized trawl boards. This result was driven by the reduction in twine diameter from 1.7 millimetres for 24-ply PE nets to 1.2 millimetres for the high strength materials.

The engineering and catch performance of a conventional single net configuration (Florida flyer) and the ‘W’ trawl configuration was compared using a 3.56-metre headline length trawl in the AMC’s flume tank (Figure 1), and also at sea. Results showed the use of the ‘W’ trawls in a single or twin-rig configuration reduced drag by about 20 per cent compared to the standard trawl.

They have also compared these results against a trial comparing quad and twin rig configurations with standard trawl configurations, which was conducted by NSW Department of Primary Industries researcher Matt Broadhurst.

From this they estimate that ‘W’ trawls in a twin-rig configuration could reduce drag by 11 per cent compared to a quad rig with standard trawls (Figure 2). There could also be a cost saving because fewer codends and the associated turtle excluder and bycatch reduction devices would be needed.

In the initial sea trials there was little difference in catch between the standard and ‘W’ trawl configurations. However, in the latest trials at Moreton Bay in Queensland with full-size commercial trawls, the fuel savings were offset by a 20 per cent fall in the prawn catch when using the ‘W’ trawl configuration.

Matt Broadhurst and David Sterling plan to test an enhanced version of the ‘W’ trawl in 2015 during sea trials off the coast of Yamba, 60 kilometres north of Grafton, NSW, in a triple-rig configuration.

One benefit of thinner, high strength nets is the opportunity to use smaller trawl boards that are easier to tow, as less spreading force is needed to open the mouth of the nets, and less weight is required to keep the nets at the required operational depth.

A conventional or standard prawn trawl board is a long device set at a high angle of attack (35 to 42 degrees to the direction of travel) to spread the trawl open as it moves along the seabed.

David Sterling has designed a new type of trawl board – the batwing otter board – to spread prawn nets with less seabed contact and less towing resistance. While reducing fuel use, the first trials with the new design also reduced catches by up to 12 per cent, compared to standard otter boards. But a revised batwing design used in further trials has maintained catch rates while reducing fuel use.

“When the batwing otter board is combined with the ‘W’ trawl, drag is reduced by about 30 per cent compared to a standard trawl and otter board system,” Cheslav Balash says. “However, further research and refinement of the design is required to ensure we catch as many prawns as standard trawling systems.” 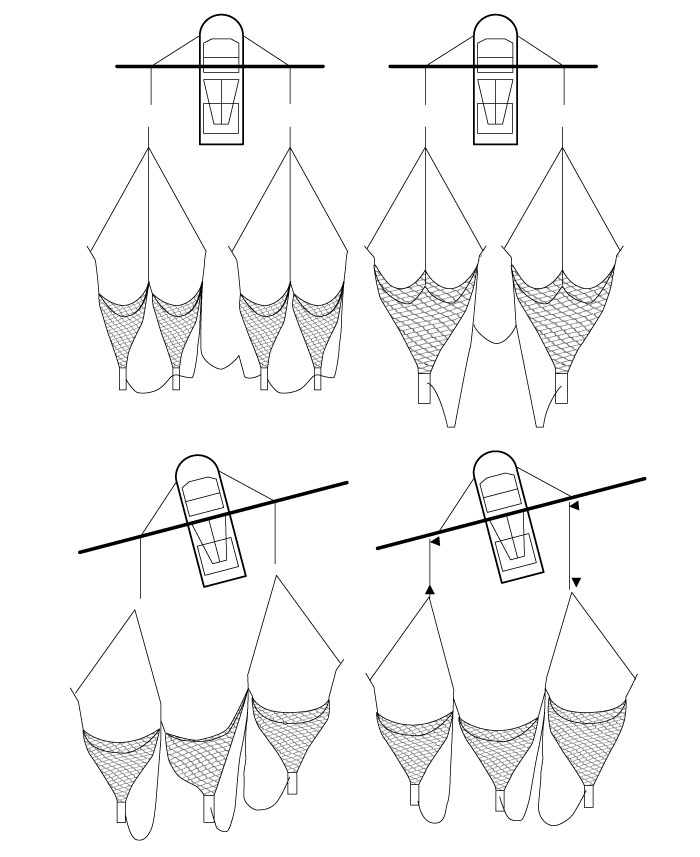 The Australian Maritime College is also investigating alternative steering mechanisms to reduce fuel use. When a prawn trawler is exposed to winds, the rudder is used to keep the trawler on course, but this increases the effort required to move forward.

A preliminary modelling study has been completed, looking at the merits of controlling tow point location, allowing the trawling gear to square itself, rather than applying the rudder to ensure a prawn trawler stays on course (Figure 3).

Cheslav Balash says given the promising results of the initial study, the next step is to study a physical model in the flume tank, to fully develop an estimate of how much fuel can be saved, and produce a concept design for a practical technology to implement the scheme on a trawler.

Aside from applying technological innovations when they become available, David Sterling says there are some steps fishers can take now to improve fuel efficiency. Fitting fuel flow meters to check how much diesel is actually being used is a worthwhile starting point.

“The amount of energy required to push a boat through the water grows exponentially with speed so a simple way to reduce fuel consumption is to travel slowly to fishing grounds.”

Incentives for skippers to reduce fuel use can also be effective, and can help align the skipper’s priorities with the owner’s or manager’s. “When I managed skippers, instead of paying them 18 per cent of the gross catch, I’d pay 23 per cent of the difference between the gross catch and half the fuel,” David Sterling says. 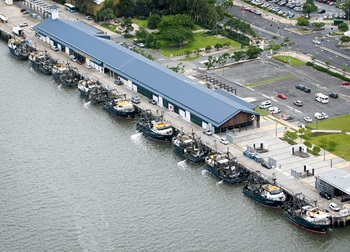 Austral Fisheries operates 10 of the 52 trawlers working in Australia’s Northern Prawn Fishery (NPF) and has improved the fuel efficiency of its fleet through a combination of finer nets and quad-rig trawl configurations.

The company had tested twin, quad and tongue nets in the 2005-06 Tiger Prawn season and found the greatest fuel-efficiency gains from quad gear, although these had been banned from the fishery in 1987.

In 2007, after the Australian Government funded the Structural Adjustment Package (SAP) and different gear types were allowed in the NPF, Austral Fisheries changed immediately to quad gear.

“We had already started using low-drag netting with our twin nets at that stage,” says Austral’s general manager Andy Prendergast. “We reduced the net drag by 27 per cent by going from a 2.1-millimetre material down to a 1.7-millimetre low-drag net sourced from India.”

Educating skippers to be conservative with fuel management, especially in the top end range of the main engine performance, has also helped improve efficiency.

However, Andy Prendergast says the major contributor to the improved fuel-catch ratio is the SAP, which bought out 18 boats in 2007, leaving 52 operating in the fishery today. Prawn stocks have been recovering and boats have been catching more prawns per boat every time they go fishing,he says.