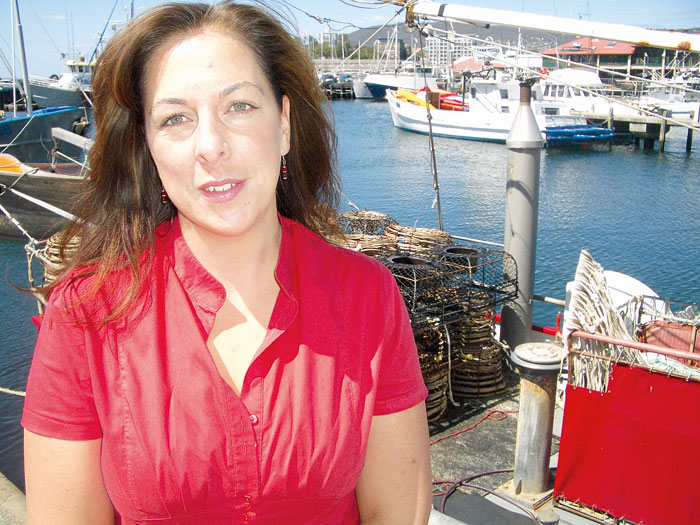 As a child, marine ecologist Gretta Pecl enjoyed an annual family holiday in the Victorian coastal community of Torquay, but that was the extent of her exposure to the ocean; even seafood was a rare inclusion on the menu.

While her mother may have been paranoid about sharks and stingers and the other unknown dangers lurking in the deep, for Gretta Pecl, it sparked the desire to learn more about those unknowns. “Just how bad could it be?” she asked.

She quickly discovered that “brilliant” was a more apt description of the underwater world. As a young researcher, she spent a great deal of time out on the water. At least three months each year diving and fishing in Coles Bay or around Maria Island off the east coast of Tasmania – and all in the name of work – seemed an ideal way to spend summer.

These days, her ‘diving into the unknown’ is more metaphorical. But sharing both the hunt for new information and the findings of the hunt is equally satisfying. She sees working with stakeholders and local communities as crucial to the success of her research, particularly when it comes to evaluating the potential impact of climate change.

In February 2016, she will convene an international conference, ‘Species on the Move’, looking at the changing patterns of wildlife across the globe – both on land and in the oceans – as a result of climate change.

The information on what is happening to wildlife is not the sole domain of scientists, Gretta Pecl says. The picture is incomplete if it does not incorporate the experiences and knowledge from relevant industry and community groups, such as commercial and recreational fishers.

From the local Tasmanian Bridgewater Anglers Club, to internationally renowned scientists, all experiences can contribute to the larger picture.

“Even someone who only goes fishing a few times a year, but who returns to the same place year after year comes to know what is normal, and to recognise changes,” she says.

Tapping into that information is essential to helping to make the best, most informed management decisions possible, and in identifying priorities for research, she says.  But having ‘lay’ information accepted as legitimate data by the scientific community has proved an ongoing challenge.

Based at the Institute for Marine and Antarctic Studies in Hobart, where she is an associate professor and the deputy associate dean of research, Gretta Pecl is also the force behind Redmap – the citizen-science-based range extension database and mapping project.

The idea for Redmap, she says, emerged from a failed research proposal. As a marine ecologist she was keen to study how the snapper that were beginning to venture south into Tasmanian waters fitted into the local environment. What were they eating, were they breeding, and what impact did they have on local fish species?

But the official response to her proposal was that “there was no evidence of snapper in Tasmania”. This was despite reports of snapper catches from commercial and recreational fishers, which had been the impetus for the proposal. “I felt that the fishers’ reports were being disregarded because they weren’t in a recognised scientific format,” Gretta Pecl says.

She had been won over by the value of community input following her experiences with Tasmania’s rocklobster fishers. This was as part of a 2008 interdisciplinary investigation into the vulnerability of a Tasmanian east-coast rocklobster fishery to climate change.

Whether or not the fishers believed in climate change, they contributed detailed information about the changes they had observed in the fishery during the previous decade. Gretta Pecl says they provided a wealth of new information, identifying changes of which researchers were not even aware.

“I realised then that while we need our traditional structures and scientific information, we also need the knowledge that is inherent in industry, in stakeholders to make a complete picture,” she says.

Gathering that information from stakeholders is what the Redmap project is all about. “I wanted to provide a place where observations from fishers and divers could be counted and become part of the scientific record. It also provides a place others can go to, to validate their own experiences that ‘it’s not just me’,” she says.

At the same time, Redmap addresses what Gretta Pecl sees as one of the major challenges facing Australia in terms of identifying changes in the distribution of marine species – the lack of data. And climate change is only one contributing factor.

“Compared with many other countries around the world we are data poor in terms of historical information about our fisheries. We also have more than 55,000 kilometres of coastline to monitor, so we need to get creative,” she says. “I see Redmap as a small part of that.”

Redmap began in 2009 as a Tasmanian mapping project, providing a web portal through which community members could submit photographs and reports of any unusual catch. The species in each report is then verified by scientists.

In 2012 it became a national program, with support from 20 different scientific institutes and 80 scientists on the verification panel to support community reporting. Redmap observations continue to suggest a largely southward extension in the range of various marine species, providing an early indication of what species might be doing, and identifying potential research priorities.

Data from the project has featured in a number of international publications, including the prestigious Global Environmental Change.

While journal articles provide international scientific validity, the number of presentations and newsletters featuring Redmap initiated by the fishing community is evidence of stakeholder acceptance of the project’s value. “There is a real sense of community ownership,” Gretta Pecl says.

“This is a gratifying outcome for the researcher, who recognises that many in the fishing industry have been sceptical about climate change in the past, although I strongly suspect that has largely changed now.”

The importance of community acceptance and involvement in the science was also an insight that emerged from her past work with fishers. “We can do the best science in the world, but if that science isn’t accepted as legitimate by the industry, then our work is essentially irrelevant.”

She says engagement and communication with stakeholders is a personally satisfying part of her role. However, she is also keen to return to some ‘pure ecology’ – the kind of work that launched her career, looking at the life history and environmental interactions of species.

Her early work focused on the life cycle of Northern Calamari (Sepioteuthis lessoniana) and Southern Calamari (S. australis), initially in Queensland, where she completed her Bachelor of Science and PhD at James Cook University, and then in Tasmania, where she began working with the University of Tasmania in 1999.

She cut back on her field research and laboratory work while her children were young – she and husband Jason have two daughters, aged 8 and 9. In 2015 she hopes to get back out onto the water and into the laboratory with an interdisciplinary project, funded by the Australian Research Council, to identify why some fish species are extending their range, but others from the same region are not.

Gretta Pecl is also part of an international team working on a global change research project funded by the Belmont Forum, to assess the coastal food security issues and vulnerability of communities in Africa (including Madagascar), Brazil and India.

This builds on similar vulnerability assessments undertaken for the east coast of Australia, and particularly the east coast of Tasmania, where ocean warming is occurring at three to four times the rate of overall ocean warming. Gretta Pecl says this is as a result of changes to the East Australian Current over the past 40 years, which have brought more warm waters further south.

She says the sites for the Belmont project, including Australia, are all in the top 10 per cent for rates of ocean warming – climate change hotspots – although they are not the only places where climate changes are significant.

“We’re fortunate in Australia that we don’t have a critical dependence on seafood for food security. But there are extensive changes taking place in the ecosystem and we can use our understanding of what is happening here to help other regions where food security is a more critical issue.”

She is keen to encourage more debate about the opportunities and challenges for fisheries and fisheries science in 10, 20, even 100 years time, outside the bounds of the strict formal scientific reporting format. The international Species on the Move conference in 2016 will be one such opportunity to do this.

As the newly appointed editor-in-chief of the journal Reviews in Fish Biology and Fisheries, Gretta Pecl has also initiated a ‘Future Seas’ series of articles, providing space for science-based speculation and personal opinion. Through this kind of discussion she hopes to see creative solutions emerging to help the fisheries sector overcome the challenges it is facing.

“In a period of rapid change, there are multiple impacts on marine ecosystems. We also have more demand for seafood globally. We need to find out how our ecosystems are changing, so that we can make better decisions into the future, to maximise sustainable production,” Gretta Pecl says.