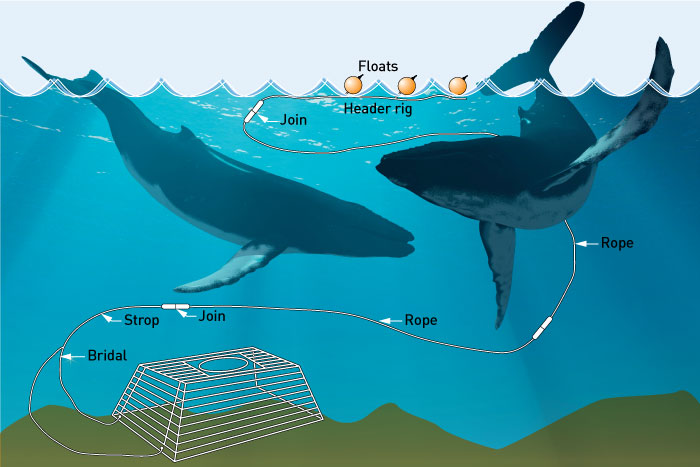 The quota system with a year-round fishing season has allowed fishers to spread the catch throughout the year. In doing so, higher beach prices have been maintained. Fishers now fish to demand and catch the amount and sizes that will deliver the best profit. It has also contributed to a healthier rocklobster population.

But the year-round fishing has also coincided with an increase in the number of whales getting caught in rocklobster fishing gear.

In 2013, there were 18 reported entanglements in lobster gear, well above the long-term average of whale entanglements for this fishery, which until then was between zero and four (average 1.72) per year.

Entanglements can lead to injury or death of the animal (although no deaths have been recorded as being caused by rocklobster gear), sometimes many hundreds of kilometres from the initial site of the entanglement.

Whales are a protected species under Australian legislation and the West Coast Rock Lobster Managed Fishery is acutely aware of the need to reduce the number of entanglements.

The industry is working collaboratively with researchers, as part of an FRDC-funded project, to trial measures including modifications to fishing gear, technologies such as audio pingers and
acoustic or anode remote release systems.

Project leader Jason How explains: “Whales move through our coast from May to November. The old rocklobster season ended in June, by which point there was not a lot of fishing occurring, with low catch rates and poor weather conditions. So the bulk of [whale] migration occurred when no one was out fishing.”

However, he says the change to the season length cannot be the only reason for the increase in entanglements.

“We are also seeing more entanglements in the ‘old’ part of the season, that is, earlier than expected. The season change may have meant subtle changes to fishers’ behaviour and we are trying to pinpoint what these are,” he says.

Jason How suspects that differences in the timing of entanglements between years may be the result of changes in timing of whale migrations, which have seen whales arriving on the west coast later than in other years, or weather conditions that may exacerbate entanglements. He says the FRDC is funding further research to evaluate the impact of these issues.

“We want to make contact with other scientists undertaking work on the modification of fishing practices to reduce whale entanglements,” he says.

“We have been encouraged by the assistance from industry. While it would be good to have more feedback from fishers, several have taken time and considerable effort to test the new gear and undertake a number of surveys. Industry is working strongly with government to find a solution to whale entanglements for the good of both the industry and the whales.”

With increased awareness of the issue there has already been a decline in whale entanglements in commercial rocklobster gear this year; seven incidents were recorded between January and
October 2014.

To examine the dynamics of Humpback Whale migration along the Western Australian coast, researchers use information from two sources: the cetacean stranding database (which monitors dolphins and porpoises as well as whales), and the commercial whale-watching database. Both are managed by the WA Department of Parks and Wildlife, the state’s lead agency for whales.

This includes commercial operators and members of the public, who will be able to report sighting of various whale species via the app.

More accurate, up-to-date information about when and where whales are travelling may allow fishers to choose alternative locations to set their pots.