A fascination with the forces that allow pests and pathogens to flourish, threatening our aquatic industries, drives Marty Deveney’s research into better biosecurity measures 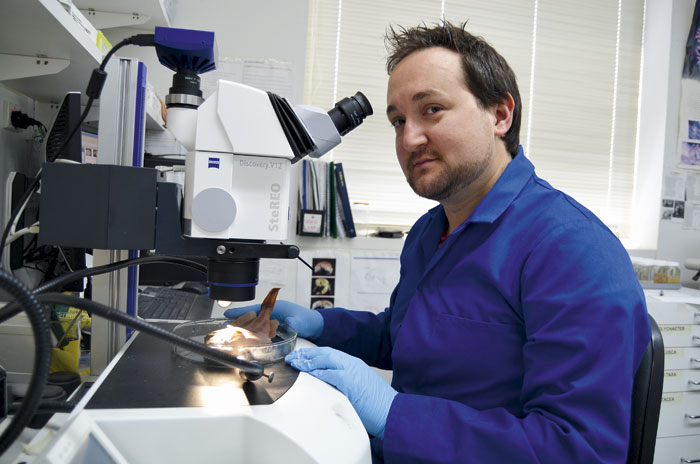 The blood, sweat and tears we spill, along with various other bodily fluids, are among the major sources of disease transfer between humans. And the closer you pack people together, the faster and more frequently this fluid-based transfer occurs. Think influenza, the common cold and, most recently, Ebola.

But what happens when your whole environment is liquid? How much faster does disease progress then and how do you stop it?

While human biomedicine may have been the first point of serious study for Marty Deveney, it is the vast extent of the “unknowns” in aquatic environments that has held his attention for the past 15 years.

“You have to manage diseases in animals that live in these environments in a substantially different way,” he says.

Working as an aquatic biosecurity specialist at Marine Innovation South Australia (MISA), Marty Deveney says disease management is clearly crucial to the success of aquaculture – the “new frontier” of farming around the world.

While land-based farming systems have been established for thousands of years, many aquatic systems are still in their initial phases of development. Aquatic animal health knowledge is decades behind terrestrial agriculture in many ways.

“It’s an exciting field of research – there are a lot of things still to find out in terms of knowledge and science. For the same reason it can also be difficult, because the knowledge base can be
quite slim.”

He says abalone is a case in point when it comes to unknowns. This large, univalve gastropod has an ancient lineage, but information about how the species’ immune system works is limited, particularly compared with mammalian immunology.

“We are aware it has an immune system, but in terms of the practicalities of how it works we are still almost entirely ignorant. When abalone farming first started in Australia we had virtually no idea about what diseases could affect it."

There are about 70 fish and seafood species farmed in Australia. Most are native species, but all come with their own entourage of parasites and pathogens. The challenge for aquaculture is to expand production while also putting in place systems to protect the industry from disease outbreaks.

Marty Deveney says he first became interested in the links between aquatic systems and food production while still at secondary school, after undertaking work experience with the Department of Zoology at the University of Queensland. He began his studies at the same university with a focus on human biomedicine, but soon changed to marine biology and parasitology.

This was followed by a PhD, spent largely on Heron Island in the Great Barrier Reef, investigating the biology of parasites that commonly affect reef fish such as Coral Trout, Queensland Groper (Epinephelus lanceolatus) and Flowery Rockcod (Epinephelus fuscoguttatus) – all candidates for aquaculture.

After graduating and completing a short stint with the University of Queensland, he moved into a marine regulatory and policy position with the Department of Primary Industries and Regions
South Australia (PIRSA) in 2001.

“One of the fundamental differences between terrestrial animal husbandry and aquaculture in Australia is that farms are generally freehold land owned by farmers, but aquatic farms operate on a lease of a publicly owned resource. There is greater and more immediate connectivity with the broader environment than on land,” he says.

“There is a strong desire and a responsibility to maximise returns – not just for profit, but to make best use of a common resource. Setting the framework for this is crucial,” he says.

While at PIRSA he helped to develop an integrated aquatic biosecurity system for SA. This recognises that the risks from fisheries, aquaculture and the overall marine environment are interconnected and need to be considered as a whole, rather than as affecting separate industries or sectors. Risks across all aquatic sectors were prioritised and resources were allocated to the issues requiring the greatest mitigation.

In 2007, he returned to research, working for the South Australian Research and Development Institute (SARDI). His biosecurity role with SARDI is to lead the MISA Marine Biosecurity Node, where he can continue to investigate the “intimate and fascinating relationships between hosts and disease agents”.

Take the minute Zeuxapta seriolae for instance, a gill fluke that can, in sufficient numbers, overcome the comparatively giant Yellowtail Kingfish (Seriola lalandi). The fluke is only 200 microns (0.2 millimetres) long when it hatches from eggs laid into the water column, while Yellowtail Kingfish grow to 2.5 metres.

Z. seriolae larvae can swim only a few millimetres a second and survive only a day without a host. Tiny, slow and short-lived – finding a host in the open waters of Australia’s oceans is a herculean challenge.

But the sea cages of a kingfish aquaculture operation provide abundant candidates within easy reach. Parasite numbers can build quickly, affecting the health and growth of the fish. The gill flukes feed on blood and over time cause anaemia, which can eventually kill the fish.

Similarly, Benedenia seriolae feeds on the skin of the fish. Nibbling away at the epithelial tissue in large numbers, they break down the barrier between the internal environment of the fish and the sea. This also affects growth and, if not managed, will eventually kill the fish.

The work has been undertaken in conjunction with CleanSeas Australia, with funding from the Australian Seafood Cooperative Research Centre.

“If you can improve parasite management, you can reduce the cost of production, increase efficiency and productivity, and improve the welfare of the animals, which are all important,” he says.

He expects the role of aquatic disease management and biosecurity will continue to increase as an inevitable outcome of the burgeoning demand for seafood. With oceans at capacity in terms of wild production, expanding fish farming is the alternative.

Most aquaculture production in Australia comes from just a few species, and while these might be the “winners” for now, Marty Deveney says this may not necessarily be the case in the future.

Many aquaculture industries in Australia had limited markets when they were first established. Industries have created their own markets: now there is broad acceptance and aquaculture products are on menus everywhere. “New farmed species will provide potential for new winners,” he says.

Among species showing aquaculture growth potential are freshwater finfish such as Rainbow Trout (Oncorhynchus mykiss), Silver Perch (Bidyanus bidyanus) and Murray Cod (Maccullochella peelii). But parasites have been an increasing problem for these species in Victoria.

Through an FRDC-funded project, Marty Deveney has been working with the Victorian Trout Association to identify treatments for one of these organisms, a ciliate parasite, which has become increasingly problematic for trout farmers.

In Victoria, summer temperatures have been rising and rainfall has declined, taking water temperatures to the upper tolerance range for the fish (about 17°C) more often. Higher temperatures provide good growing conditions for the parasite.

“We found that the biology of the ciliate in Victoria was sufficiently different from those in North America and Europe that we needed to develop a different treatment approach. While the findings applied to Rainbow Trout, they are also relevant to other freshwater finfish that are aquaculture targets.” Marty Deveney says.

He says, overall, he would like to see aquatic animal health more strongly embedded within the aquaculture industry, as opposed to practitioners “off to the side doing research”.

This is already beginning to happen with veterinary courses at the University of Adelaide and elsewhere including a stronger focus on aquatic animal health. “I think this will become more prominent as time goes by.”

From the microscopic world of pathogens, Marty Deveney is also involved in the big-picture issue of national marine pest biosecurity as part of his role at MISA. This includes the development of new detection and surveillance systems for Australia.

He leads a team working on molecular tools to detect high-priority marine pests and to streamline the national monitoring system that surveys 18 sites every two years. Logistics and cost have been a problem in the past. Molecular testing can provide a more rapid and cost-effective process to boost surveillance and improve the speed of response.

“For aquatic systems in general and aquaculture in particular, we need to enhance our basic biosecurity systems,” he says.

“We need to be able to manage emerging pathogens and pests, even in an environment where we know relatively little about them, before they spread.”